Whirlpool Corporation is the top major appliance manufacturer in the world: in 2015, it sold 70-million products in more than 170 countries. The company employs 97,000 people in 70 manufacturing and R&D centres and invests $1-billion in capital in its R&D centres annually. The company adopts an Original Equipment Manufacturing (OEM)/Original Design Manufacturing (ODM) approach for new business lines. Being a relative new-comer to the vacuum cleaner market, it is using the Hotpoint brand for the EMEA region, but still wanted to conduct a comprehensive performance analysis of the product’s key parts. This article describes how EnginSoft applied a Computational Fluid Dynamics (CFD) analysis, on behalf of Whirlpool EMEA, to simulate three different geometrical design modifications to the vacuum cleaner head to improve on a baseline performance that was modelled first. The objective of the study was to investigate the sensitivity of the system’s performance to geometric variations so that the best modification could be identified for further analysis to ensure that the product would satisfy Whirlpool’s product objectives of energy-consumption-regulation compliance, product performance and a pleasant user experience.

Whirlpool Corporation is the number 1 major appliance manufacturer in the world: in 2015 70-million products were sold in more than 170 countries; the company has 97,000 employees in 70 manufacturing and R&D centers, and invests $1-billion in capital in its R&D centers annually. The four major commercial regions are North America (NAR), Latin America (LAR), Europe, the Middle East and Africa (EMEA), and ASIA.Whirlpool EMEA, with its headquarters in Comerio (VA), Italy, is number 1 in EMEA and number 2 in Europe. It has 24,000 employees that speak over 40 languages, and 15 industrial sites in eight countries. In addition to internal manufacturing, Whirlpool uses Original Equipment Manufacturing (OEM)/Original Design Manufacturing (ODM) for new business lines.
The company is strongly committed to delivering high performance products, that are sustainable and environmentally friendly to its customers. Over the last year, its figures have been outstanding: -27% of water consumption, -11% in energy consumption, -8% of waste production.

Aim of the simulation

Whirlpool is relatively new to the vacuum cleaner market and is leveraging the Hotpoint brand in the EMEA region. Despite the OEM/ODM approach for this product, Whirlpool wanted to conduct a comprehensive performance analysis of the product’s key parts. The vacuum head is probably the most important part for assuring the best balance between Energy Related Product (ErP) Regulation-compliance, performance in all use cases, and a pleasant user experience.
In recent years, the ErP regulation has introduced the concept of real performance: moving the customer’s attention away from misleading figures like electric motor power (Watts) and suction power (Air-Watts), to performance figures that are closer to the cleaning performance, such as dust pick-up on hard floors and carpets.

EnginSoft created a 3D numerical model of the vacuum cleaner head based on the CAD geometry provided by Whirlpool. The parts were imported into the ANSYS CAD/MESHING system and merged together to achieve an acceptable connectivity. Missing parts, connections and boundary conditions were also generated. The ANSYS CFX solver was used to evaluate the system’s fluid dynamics. The CFD model replicated the test conditions based on the aforementioned ErP regulations: the vacuum head was rested on the floor and centered on a guide inclined at 45 degrees that contained the dust. A semi-spherical air plenum surrounding the volume completed the computational domain. In this approach, the air entered the vacuum head from the semi-spherical space (representing the environment) and was guided along a flexible duct toward the vacuum cleaner’s body (not modeled here).
The resulting CFD model is shown in figures 1 and 2.
Every part of the vacuum head was modeled, including:

The air’s motion is generated by a centrifugal blower; in order to account for this effect, the engineers implemented a 3D region with a momentum source to reproduce the blower’s working curve in the solver. Also, to properly set up the numerical model, a 3D porous loss was considered: given the mass flow-rate during the free-suction state whenthe vacuum head is not constrained (rested) on the floor, the resistance coefficient was tuned to honor the mass flow-rate supplied. In other words, the corresponding resistance simulates the rest of the vacuum cleaner which was not explicitly modeled. For this reason, this resistance coefficient was used for all the simulations studied.
Based on the air depressurization, the resistance coefficient and the blower curve imposed, the solver generated the mass flow-rate and the fluid dynamics of the entire computational domain.
The mass flow-rate (or the blower’s working point), the level of depressurization and the air-flow direction in the bottom region of the vacuum head (interaction between the floor and the vacuum head) were the main conditions to consider in comparing the different designs. 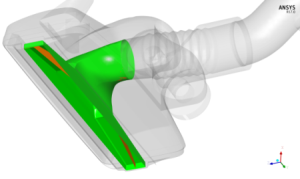 Using the baseline results, three kinds of configurations were studied, corresponding to three geometrical modifications. This was done mainly to investigate the sensitivity of the system’s performance to geometric variations.

Modification 1 – new shape of the hood’s intake zone
Using the same depressurization, this modification slightly increased the mass flow-rate. This effect, although not as strong as expected, still represented useful information about how the system reacted to such modification. 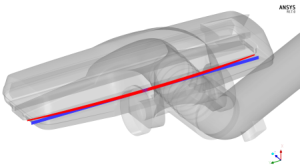 Modification 2 – curved shape of the rubber flap
This configuration had the greatest potential to improve the system’s efficiency in the scenario studied. To best compare the performance of the baseline configuration with modification 2’s configuration, they were simulated using the real working curve of the blower (head flow-rate). The result showed that, although the increase of the mass flow-rate through the hoods was similar, the percentage of air captured from the fissure was much higher. This would result in better performance of the vacuum cleaner in the test conditions. 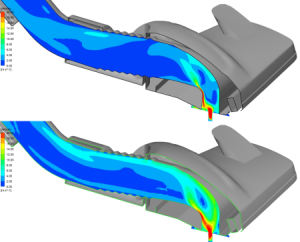 Modification 3 – new shape of the hood’s elbow
Using the same depressurization, this modification did not create any appreciable increase in the mass flow-rate. However, there was a benefit to the smoothness of the flow when air sucked from the outside was guided from the vertical to the horizontal direction. Therefore, the elbow suffered less back-flow.

Based on the testing scenario, the approach used has a general significance. It is reasonable to consider that similar modifications on different vacuum heads might lead to similar responses. It has to be noted that while modification 2 improved the air flow coming from the fissure, it was a relatively low-cost improvement. Modification 2 appeared to be the most promising method to increase the system’s performance. Furthermore, a more detailed CFD study, using a lagrangian approach, of the vacuum cleaner’s body, the blower system and the multiphase effects for dust simulation could be considered. 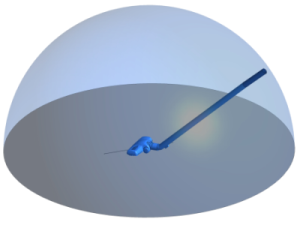 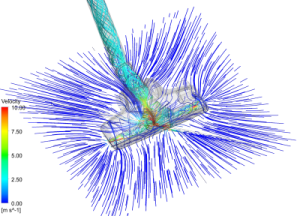 Figure - Qualitative behavior of the air entering the brush 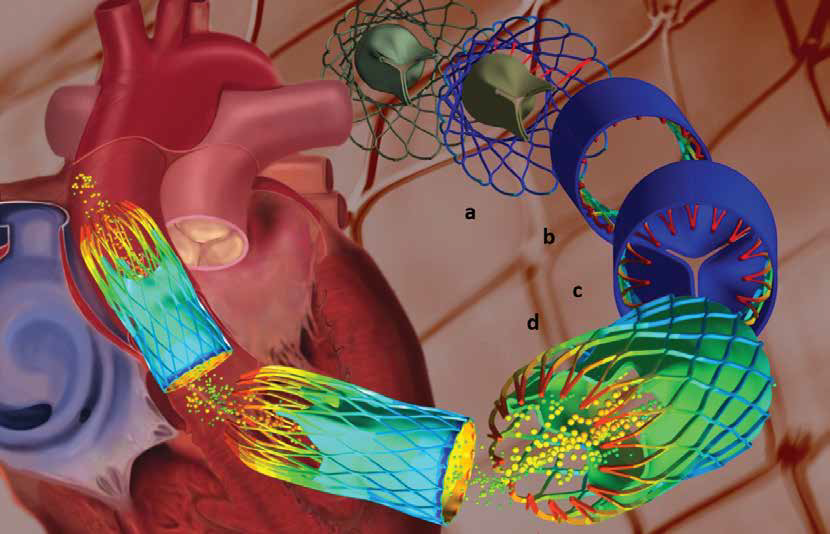 Since this cannot be accurately measured in an implanted stent, manufacturers decided to use Multiphysics to simulate the process to better understand the method and to calculate the forces operating on the implant in order to improve the stent design and the surgical procedure, as described in this article.