The tensile and formability tests in warm condition

The present work investigates the Warm Hydro Forming (WHF) process of an AA6xxx series alloy (AA6061-T6) using a numerical-experimental approach. As concerns the experimental activity, tensile and formability tests in warm condition were carried out to identify the mechanical properties: flow stress curves,

Forming Limit Curves (FLCs) and anisotropy values according to temperature and orientation respect to the rolling direction were obtained. In addition WHF tests were carried out using hydroforming facilities of the laboratory of Advanced Forming and Manufacturing (http://afmlab.poliba.it); the following process parameters were investigated: maximum oil pressure (pmax), Blank Holder Force (BHFmin and BHFmax) and working temperature.
As concerns the numerical activity, Finite Elements simulations were focused on the best modeling of the WHF process: models were tuned in order to fit experimental results; in particular different values of the coefficient of friction (COF) and various yield criteria were assumed for fitting experimental data in terms of thickness reduction on the formed component. The Forming Limit Curves (FLCs) adoption, since determining the sheet formability, allowed to identify the critical areas (possible cracking or wrinkling). The post-processing was made by LS-PrePost. 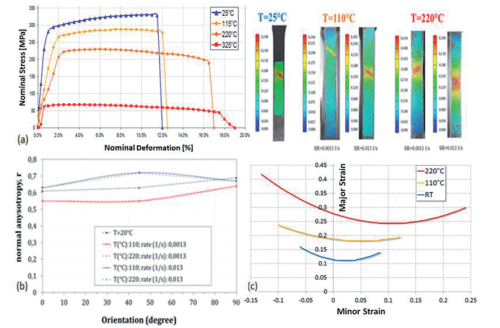 Low density, high strength and stiffness are some of the features that make Al alloys interesting enough to replace some mild steels in automotive and aerospace fields. Hydroforming is an alternative stamping process where the “punch” is replaced by a fluid under pressure, usually oil, that has physic-chemical characteristics such as not to degrade at high temperatures. Actually, this technique is largely accepted by the industry for the benefits associated with it: high drawing ratio and capability to create complex shapes; however, it is used for small specific productions due to high cycle times and initial economic investments. The Warm Hydroforming (WHF) uses heat to increase formability of Al alloy. The higher temperature acts at the crystallographic level activating additional sliding planes and increasing formability. The effect is remarkable even if moderate temperatures are adopted.
In the following sections the results from numerical simulations, aimed at modeling the WHF process, are detailed. The FE models were created using material data from preliminary experimental tests, which allowed to determine the mechanical properties of the investigated alloy (AA6061-T6). In addition, results from WHF tests allowed to tune the FE model by fitting the experimental thickness distribution on formed parts. 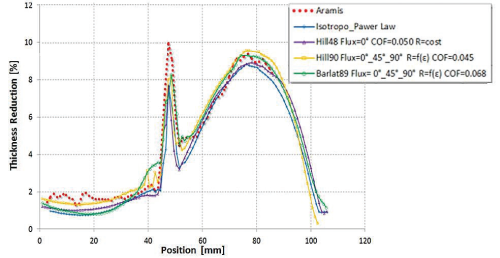 The experimental tests were carried out with two objectives: (i) the mechanical characterization according to temperature and orientation (with respect to the rolling direction); (ii) the WHF process investigation in order to have a real thickness reduction along a preferential path to be used for calibrating the coefficient of friction for numerical analyses. The investigated blank had an initial thickness of 0.5 mm. Tensile tests were carried out using a standard 20 ton electromechanical INSTRON machine equipped with the heating device shown in Figure 1a: it is composed by 9 radiant heaters positioned all around the specimen and managed by a PID controller in order to reach and maintain the target temperature (+/- 1%); the front opening allows the optical measurements system ARAMIS to acquire the complete strain field using the Digital Image Correlation (DIC) technique: in such a way the Lankford’s coefficients of the alloy were obtained, since tested specimens were extracted along three different orientations: the rolling one (α=0°), the transverse one (α=90°) and the intermediate one (α=45°).

Formability tests were carried out using the Nakajima equipment shown in Figure 1b, assembled on the same tensile test machine. It allows to heat the specimens by the hemispherical punch and to acquire the strain field by the sensors of the DIC system. WHF tests were carried out by the 500 kN electro-hydraulic press machine (http://www.gigant.it) shown in Figure 1c; it is equipped with a heated die able to reach the maximum temperature of 300°C, an oil pressurizing unit able to work (using heated oil) at the maximum pressure of 350bar. The information obtained from the mechanical characterization have been summarized in Figure 2 in terms of flow curves (a), anisotropy values (b) and Forming Limit Curves (c). 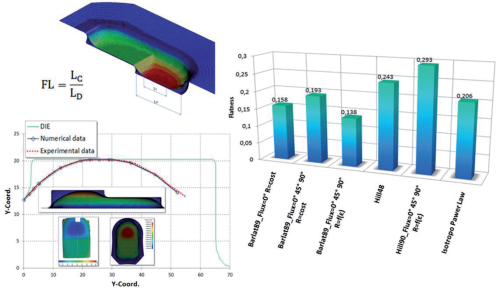 Fig. 4 - Numerical and experimental thickness distributions along the symmetry path

The commercial FE Explicit code LS-DYNA was used for numerical simulations. The blank geometry and the die shape utilized for simulations are shown in Figure 3.
The blank was divided into two parts: the internal one, which is subjected to oil pressure and the external one (in contact with the blankholder) on which the closing force (or BlankHolder Force, BHF) is applied. Due to the symmetry, only half of the blank was modeled in order to reduce computational costs; in addition also a mass scaling technique was adopted.
The blankholder and the die were modeled as rigid parts (*MAT_20 in LS-DYNA) while the blank as deformable; different yield criteria were used to model the material behavior; in particular, the following anisotropic yield criteria, in plane stress condition, were taken into account: Hill 1948 (*MAT_122), Barlat 1989 (*MAT_36) and Hill 1990 (*MAT_243). Both Lankford’s parameters (R00, R45 and R90) and plastic flow curves along the investigated orientations (0°, 45° and 90°) were used for determining the parameters of the adopted yielding models. Also the isotropic yield criterion (*MAT_18) was used for comparison purposes. In this work the following process parameters were adopted (for both experimental and numerical tests): Temperature (T): 110°C; BHF: from 63 (BHFmin) up to 89 kN (BHFmax) by a linear profile; maximum pressure (pmax): 48 bar by a linear profile. Such process parameters were implemented through the LS-DYNA cards *LOAD_RIGID_BODY and *LOAD_SHELL_SET for BHF and pmax respectively (the adoption of the working temperature was simulated using the material behavior specific of that temperature).

The COF value was evaluated by minimizing difference between thickness data along the longitudinal middle path (axis of symmetry) of the component. In particular, an optimal value was determined for every yield criterion investigated in the present work by comparing thickness results from numerical simulations with correspondent experimental data obtained using the DIC system Aramis. The graph in Figure 4 summarizes numerical results (in terms of thickness profiles along the symmetry path) obtained using the investigated yield criteria: Barlat’89 and Hill’90 (R = f (ε)) appears to be the ones which allow the best fitting of experimental data. In particular, the Hill’90 criterion is able to fit better the left part of the experimental curve (characterized by smaller strain levels) while the Barlat’89 criterion allows to fit better the right part of the curve (the one concerning the deepest part of the component). Also an additional parameter was investigated for checking the robustness of numerical models: the Flatness (it is as the ratio between the length, LC, of the symmetry path in contact with the die and the length, LD, of the bottom part of the die). The Figure 5 shows the flatness values calculated using models adopting different yield criteria: using as reference the experimental value of 0.2141, the Barlat’89 allowed the best approximation.

In order to predict critical areas characterized by an elevated risk of ruptures or wrinkling, material FLCs (which represent the limit values of major and minor strains) were implemented in the numerical models. The experimental FLCs shown in Figure 2 were used in LS-PrePost as reference for the principal strain values calculated in the FE analyses for all the sheet elements. The Figure 6 shows results obtained using anisotropic Barlat89 model with COF equal to 0.068.
It is possible to note that none sheet element exceed FLCs curve, therefore risks of rupture are not highlighted. The quality of formed component is quite good, recording a severe thinning in correspondence of deepest part of the component. The map of the quality areas is corroborated by that of the thinning.

This work shows the LS-DYNA capability to simulate the WHF process and the importance of the extensive alloy mechanical characterization. The implementation of the anisotropic yield criteria as Hill’90 or Barlat’89 seems to be the best way to fit experimental data as the thickness reduction. It is important to underline that it is necessary to determine an appropriate COF in order to fit experimental thickness data. The management of the experimental FLCs in LS-PrePost provides an easy way to show the results and to identify dangerous areas.

Fig. 5 - Simulation results in terms of major and minor strains of all sheet elements compared to the experimental FLC

This project investigates how best to correctly predict the energy absorption of these non-isotropic and non-homogeneous materials, whose lamina thickness is typically of the order of 0.2 mm or less and consists of tiny fibers or particles dispersed in a matrix material.