CFD proves to offer a reliable working methodology for designers

Designers of tower cranes must consider many variables when translating the interaction between air flow and a structure into an integral force.
Synthesizing the variables makes the calculations more precise and easier to perform, without compromising safety margins.
Industry regulations must also be followed in creating appropriate predictive models for evaluating the effect of airflow on these cranes. The reference standard for calculating the wind loads acting on a tower crane are conceptually simple and easy to implement and include many rules and parameters that can help designers to evaluate the shielding effects of components’ shapes. However, engineers must typically be guided by their intuition and experience to understand how much one element is shielded by another and how intensely they are affected by the air flow.
This article proposes the use of computational fluid dynamics (CFD) to address these complexities.

The design of a tower crane is composed of two consecutive, mutually dependent phases. The first phase involves the development of the machine itself; the second concerns its application in construction sites. When sizing the parts of the tower crane, the designer must take into account a series of loads. One of the most important of these, due to its insidiousness, is the effect of the wind on the exposed surfaces, which is a complex phenomenon that must be addressed during the design phase.
There are many variables to consider when translating the interaction between an air flow and a structure into an integral force. Therefore, it is essential to synthesize the variables in order to make the calculations more precise and easier to perform, without compromising safety margins. Moreover, it is vital for the design engineer to follow industry regulations in creating an appropriate predictive model for the crane.

The reference standard for calculating the wind load acting on a tower crane is FEM1.001, which has particularly easy settings due to its conceptual and implementation simplicity. This calculation method assumes that the wind is acting horizontally, that it can blow against the tower crane from any direction at a constant speed, and that it is generating a static force.
Dynamic pressure is thus calculated with the well-known formula:

To determine the force caused by this pressure on a structural element, the following expression is used:

The standard includes a table of the form factors for the most common profiles used in carpentry construction. In order to determine the resulting force on the whole machine, the force acting on the individual components is calculated using (2) and, finally, the total sum is calculated. The last step of the process, which is to evaluate the shielding effects that a generic element will have on the next one, is perhaps the most critical and can place the design engineer in difficulty. While the standard has many rules and parameters that can help the designer to evaluate these shielding effects, engineers must typically be guided by their intuition and experience to understand how much one element is shielded by another and how intensely they are affected by the air flow.

As mentioned above, the method proposed by the FEM1.001 standard allows engineers to easily perform a numerical evaluation of the wind force on a crane, using a completely traditional calculation. However, some critical aspects persist, such as:

These issues represent a real challenge for the engineer performing the calculations. The computational fluid dynamics (CFD) calculation discussed below, therefore, presents an innovative attempt to overcome these uncertainties and to assess the feasibility and accuracy of the traditional approach. The Ansys CFD analyses were performed for a Terex flat-top CTT172-8 crane (Fig. 1), according to the FEM1.001 standard mentioned in paragraph 2, and the resulting force was used as a reference for the comparison between the two methods.

A CAD model of the tower crane was supplied by Terex: the geometry consisted only of the upper part of the tower crane, specifically the operator cabin, the concrete counterweight and the jib. Three different crane lengths were considered: 65, 60 and 55 meters (Fig. 2). The crane lengths were obtained by “cutting” the farthest part of the jib, while the counterweights were reduced accordingly.
To accurately calculate the fluid dynamics surrounding the crane, a suitably large external domain was considered in the CFD model. The dimensions of the box in this case were 1.0 x 0.8 x 0.2 km (Fig. 3). Different wind directions were evaluated by simply rotating the cylindrical domain of the crane relative to the wind inlet. Clearly, the major challenge of this CFD analysis concerned the over dimensions of the geometry, together with the extremely detailed CAD of the solid parts of the crane.
Small bolts, screws, and panels were common and the geometric anomalies within the CAD were too long and cumbersome for the user. Fluent Meshing’s fault-tolerant mesh workflow was crucial to successfully mesh the fluid geometry, preserving the relevant part shapes of the crane while neglecting all other details. Thanks to this powerful tool a triangular surface mesh of the tower crane was created, from which it was possible to extract the fluid domain directly.
A tetrahedral and prism approach was then used to mesh the cylindrical section of the tower crane, while the external box was meshed using a structured strategy. The resulting meshes have very large numbers of elements, due to the overall dimensions of the model and the level of mesh detail (Fig. 4). 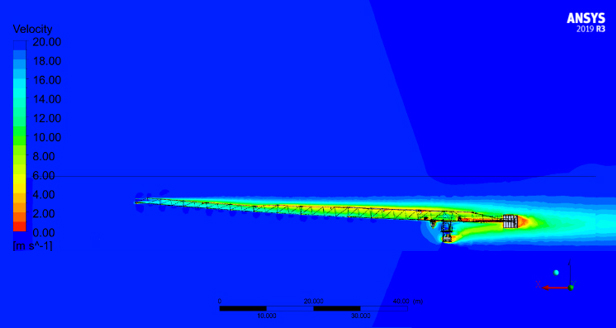 The Ansys CFD model was essentially configured for an external aerodynamics problem with incompressible, turbulent, steady state conditions.
An air temperature of 20°C was selected for the working fluid, with a constant wind inlet velocity of 20 m/s. Three different wind directions were considered: headwind (front), side and tailwind (rear), which were achieved by rotating the cylindrical domain of the crane. The k-omega shear stress transport (SST) turbulence model without ground contour effects was used. Free flow (symmetry) conditions were used on the sides of the bunding box.
Results were both qualitative and quantitative, in terms of the pressure and velocity contours (Fig. 5) and overall pressure on the crane surfaces. The shielding effect of the wider surfaces on those that follow is evident in Fig. 5.
Terex was mainly interested in predicting the resulting forces along the three Cartesian directions: longitudinal (X), vertical (Y) and transverse (Z). Fig. 6 shows the cumulative plots of the X (longitudinal) force for the case with headwind. The similarity of the results for the three cases is noticeable, with a slight increase in overall force intensity from 55 to 65 meters, in line with expectations. It can be also noted that the operator’s cabin and the slewing unit are responsible for most of the resulting overall force, while the jib has a much lower effect on the force per unit length.

The CFD study focused on the forces acting in X, Y and Z directions on the Terex tower crane, with three jib length configurations, and one wind speed from three directions.

The results were in very good agreement with each other, especially for the headwind and tailwind cases, where the overall X force was almost the same in intensity but opposite in direction. The differences in the tower crane lengths seemed not to be so relevant, since the overall X force could easily be estimated from one result for the other tower crane lengths. The results of the CFD calculation were very close to those obtained using the traditional methodology: the integral force forecast was in line with Terex’s expectations. More detailed information is provided by the CFD local force forecast, however, especially where surfaces with greater extension offer significant shielding effects. 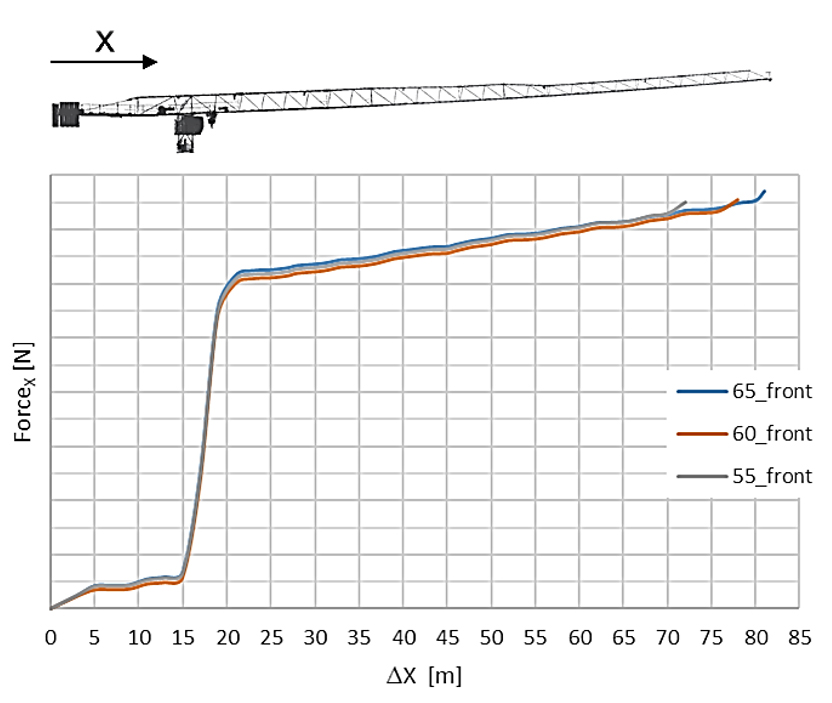 In conclusion the CFD analyses yielded overall results that were comparable to strict compliance with the standard’s provisions for shape factor selection, determination of surfaces exposed to wind, and shielding effect, but provided a more detailed insight into local phenomena, both qualitative and quantitative, thus furnishing the designer with a reliable working method.

[1] FEM1.001: “Rules for the design of hoisting appliances”. Wind forces are dealt with in Booklet 2: “Classification and loading on structures and mechanisms”.
Since this article is not intended to describe the regulatory framework governing the design of a crane, the reference will be limited to this regulation only. In the usual design process, other standards, in addition to FEM1.001, are also used to assess the wind effects. 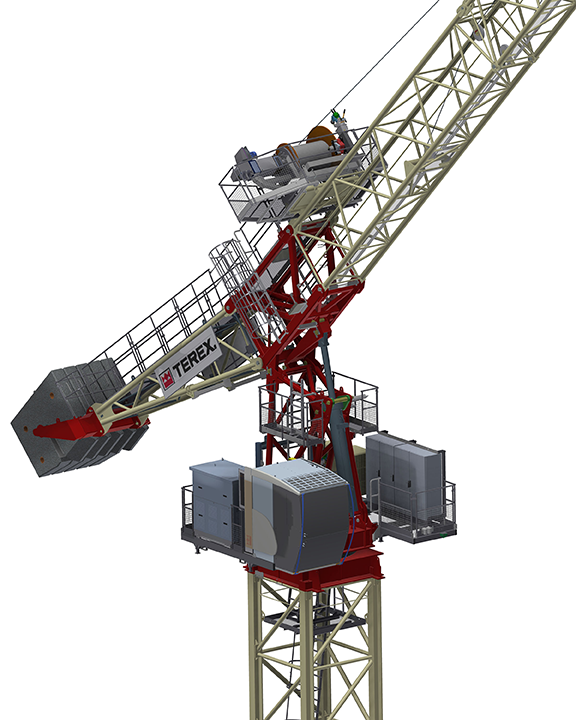 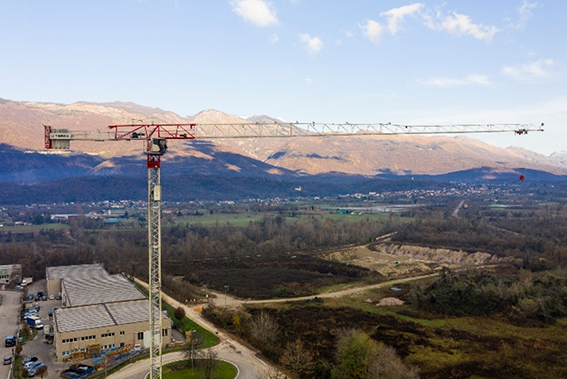