Social and environmental factors continue to drive demand for electric vehicles. In this article, we describe how Piaggio, which produces motorcycles and scooters including the world-renowned brands Aprilia, Moto Guzzi, Vespa and Piaggio, used computer-assisted engineering simulation to evaluate the structural safety, performance and dynamic behavior of the driving mechanism of a two-wheeled vehicle under both normal and spurious operating conditions, specifically static and fast dynamic conditions.

The driving mechanism studied was developed to move a two-wheeled vehicle backwards. The actuating system is mounted on the rear-wheel axle. The necessary torque is provided by an electric motor. Fig. 1 shows the multibody model used to predict the system’s dynamic behavior. The simulacrum is a rigid body whose rotational inertia properties are equivalent to the vehicle’s translational ones. The simulacrum was included in the simulation model to ensure the correct prediction of the system’s response time. The largest gear on the left-hand side of Fig. 1 is coupled with the simulacrum by means of a cylindrical joint. So, when a torque is generated by the electric motor, the gear does not move the vehicle. Instead, the gear moves three rotating bodies, which are initially kept in place by springs, as shown in Fig. 2:

When the vehicle moves forward, spurious mating between the rotating and the translating bodies must be avoided, because the internal combustion engine (ICE) would make the electric motor rotate at a high enough speed to destroy it. Such spurious mating can be induced by a malfunction of the springs. To that end, the translating body can move away from the rotating ones as a result of the motion of three so-called “disengaging bodies” (see Fig. 4). When the vehicle moves forward, the disengaging bodies rotate, pushing the translating body away from the rotating ones, and up to a final, safe position where spurious engagements are not possible (see Fig. 5). A multibody model was used to compute the speed at which this mechanism reaches the safe position. That speed must be low enough to guarantee the electric motor’s survival.
These disengaging bodies undergo both impact conditions and highspeed stationary ones. Both these conditions were simulated to assess the structural resistance of the disengaging bodies.

The first simulation concerned the electric motor that actuates the device; the simulation included:

The simulation was carried out under both lubricated and dry conditions. The graph in Fig. 6 shows the angular velocity of the simulacrum (see Fig. 1), which is, of course, directly related to the vehicle speed.
ω0 is the simulacrum’s angular velocity that corresponds to the desired backward speed of the vehicle. The relevant quantity to be computed was t0, which measured the system’s responsiveness: its computed value was deemed satisfactory.
Lubrication was discovered to be irrelevant in terms of vehicle backward speed. However, it proved to be necessary because the rotating and the translating bodies remain engaged after the vehicle stops, because the spring’s forces are insufficient to overcome the friction forces at the mating surfaces. Fig. 7 shows the system’s configuration after the vehicle had stopped, without lubrication. Lubrication turned out to allow the rotating bodies to resume to their initial position after the vehicle stopped.

The simulation was then carried out moving the vehicle forwards. This was simulated by applying a ramped angular velocity to the simulacrum. The translating body’s motion along the rear-axle’s axis had to be triggered at a low enough vehicle speed to guarantee the electric motor’s survival. Fig. 8 shows both the translating body’s axial position and the vehicle speed time histories.
ω1 was deemed to be low enough to avoid failure of the electric motor. Lubrication turned out to have a significant effect on this working condition, as shown in Fig. 9. As was expected, the lubricated systems was more responsive. 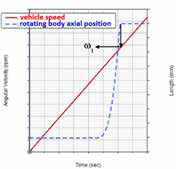 Fig. 8 - The disengaging process and the time history of the translating body’s position

Fig. 9 - The disengaging process and the effect of lubrication.

Due to the system’s topology, the disengaging bodies experience the same angular velocity as the rear-wheel axle. So, they can reach the angular velocity that corresponds to the vehicle’s maximum speed. A fixed element method (FEM) analysis was conducted to verify whether those bodies could withstand the maximum speed condition. Fig. 10 shows the computed stress distribution.
The FEM analysis determined that the safety factor corresponding to the maximum stress was high enough to conform to the Piaggio standard. At the end of the disengaging process, when the translating body reaches its final position, the disengaging bodies are affected by the same impact condition that the translating body undergoes. Fig. 11 shows the system’s initial and final positions. 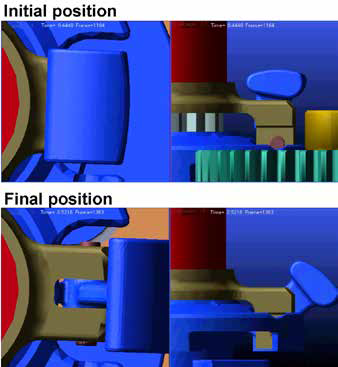 Fig. 11 - The disengaging bodies’ structural performance and the initial and final positions of the transient condition. 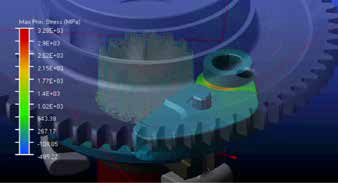 The rotating bodies undergo impact conditions when they engage with the translating body. The resulting stress distribution was first evaluated using a modal superposition approach directly inside the multibody model. Using this method, stress levels were obtained which were above the yield limit, due to the method’s inability to consider the material’s plasticity.

Therefore, the multibody model was used to compute the impacting bodies’ velocities, which were subsequently fed to an explicit FEM model as the initial conditions. This latter model was then used to compute the stress state, using proper material data, to take into account the plasticity phenomena induced by high strain rates. Fig. 14 shows the stress distribution at time of impact.
The maximum stress was found to be below the maximum limit allowable by the Piaggio standard. 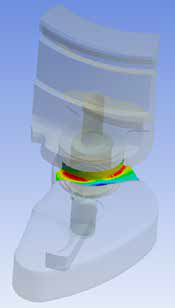 Fig. 14 - The rotating bodies’ structural performance and the stress distribution computed with an explicit FEM model.

The dynamic behavior of the system was simulated, singling out the effects of lubrication and verifying its functionality under both normal and spurious working conditions.

The structural integrity of critical components was verified by leveraging coupled MBS/FEM analyses. 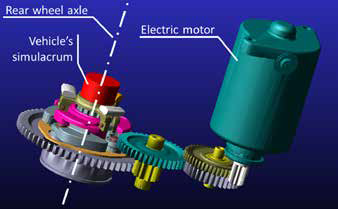 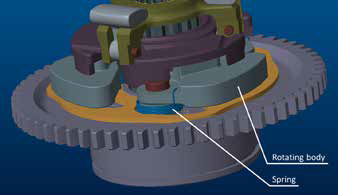 Fig. 3 - The interface between the rotating and the translating bodies. 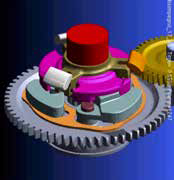 Fig. 5 - Safe position during forward motion of the vehicle.

Salvagnini is a reference in applying intelligence to sheet metal working and has selected RecurDyn software for its multibody analysis requirements, becoming the 500th commercial customer of FunctionBay Inc.