Two-step approach to numerical simulation of fire and smoke propagation

Civil engineers make use of numerical simulations of fire and smoke propagation in the early stages of building design to assess a building’s structural behavior, the fire resistance of evacuation routes and the speed and extent of the spread of a fire and smoke, among other things.

This article explains how the simulation of a severe fire in a warehouse that had caused substantial damage was undertaken. It explores the use of the fire dynamics simulator (FDS) code, developed by the US National Institute of Standards and Technology (NIST), with a two-step approach to the analysis of the cause and spread of the fire that reduces the requirement for computational resources and the time required to execute the simulation.

Two-step approach to numerical simulation of fire and smoke propagation

Numerical simulations of fire and smoke propagation are widely used during the early stages of the design process to assess, among other things, the structural behavior of buildings, the fire resistance properties of evacuation routes and more. For this project, the simulations were developed to represent the initial phase and the spread of a fire in a warehouse and included all the intermediate bulk containers (IBC) loaded with liquids that were stored in the building and which were partially involved in the fire.

The fire that was simulated had been severe, causing substantial damage to the building. It was predominantly the stocked materials that were involved in the fire. Most of them, in fact, were fully loaded IBC that had been piled up by type. The fire was confined to a limited area of the facility thanks to the intervention of the firefighters, who were able to completely extinguish the fire several hours after the first flames spread.

The interested warehouse consisted of three buildings, one of which, whose side walls were partially open, was involved in the fire. The gross area involved in the fire measured approximately 60m in length and 28m in depth, with a wall height of 4m. The ceilings of the warehouse consisted of barrel vaults made of concrete with bricks and steel rods and there were large openings between the sidewalls and the ceiling itself (see Fig. 1). This type of construction guarantees the supply of oxygen to a fire, as reported below.

The main hypothesis regarding the first stage of the fire was that it had started as a result of some electrical issue that had occurred in the electrical power grid close to the warehouse. Specifically, the starting point of the fire was identified as having been an electrical fault in one of the main power control panels of the building. Thanks to the proximity of the polystyrene insulating panels and of the wooden pallets, the fire spread from this source to the nearby IBC, rapidly growing in size and eventually causing the ceiling to collapse.

In order to evaluate the hypothesis of the first stage of the fire (its cause and spread), numerical simulations were carried out using the Fire Dynamics Simulator (FDS) code developed by the US National Institute of Standards and Technology (NIST). This computational fluid dynamics (CFD) code is a large-eddy simulation (LES) code for low-speed flows, with an emphasis on smoke and heat transport from fires, and is widely recognized as the standard tool for these types of applications as a result of its thoroughly verified and validated development process.

The computational domain of the model, which was discretized with a Cartesian mesh, was limited to a specific portion of the warehouse, which measured 33.6 x 31 x 15 m, to speed up the simulation. In the full model, this domain was divided into 24 meshes, each one consisting of 92,000 cells (over 2.2 million cells globally). The 3D geometry was able to be properly reproduced in the numerical model as a result of the chosen size of the cells (cubic cells with a 0.2 m edge size). The model included all the elements, both structures and fire-related materials/objects, that were required to accurately reproduce the building (see Fig. 2 and 3).

A specific object was used to represent the ignition source (the socalled burner) in the model. It was positioned in a small room, to emulate the same spot that the power panel was fitted in the actual warehouse (see Fig. 4). The burner’s properties were represented in the model as a box emitting a net heat flux. These values were calculated from the nature of the ignition (an electrical fault) and from the analyses of the video recorded by the CCTV system.

To simplify the model and reduce the computational cost of the analyses, the behavior of the materials listed previously was imposed on the basis of - the so-called “ignition temperature” approach. This method makes it possible to avoid defining a pyrolysis model for each material and, conservatively, to approximate the involvement of the objects according to a specific Heat Release Rate curve for each material. When an object made of a specific material reaches the ignition temperature, it starts to release heat according to the curve (power over time) defined in the input file of the model.

There were two different steps to the numerical investigation strategy. Firstly, the analyses were related to the calibration of the cartesian mesh size and to the correct representation of the burner. A set of analyses was executed on a reduced portion of the domain that only included the burner and the room covered with the polystyrene insulating panels. Secondly, the reduced model was nested in the global one, to execute the full domain analyses and to post process the whole model.

This approach allowed us to obtain some extremely interesting results: in terms of the representation of the early stage of the fire, the reduced model was adequate and enabled the use of a mesh size that reduced the computation time for the analysis and the requirement for very large high performance computing (HPC) devices. The full model was run on 24 cores of a cluster and took 48 hours of computation time to evaluate two hours of the spread of the fire and smoke.

The global model represented the actual development of the fire and provided very significant results on the lead-up to the moment that the structural collapse occurred. We were also able to define the behavior of the materials and of the ignition source of the fire as they corresponded to the video recording and the data collected after the event (see Figs. 6 to 9). 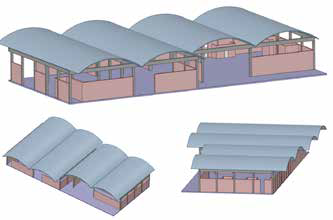 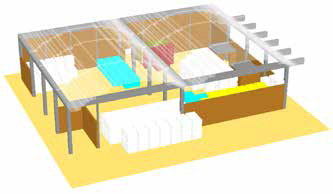 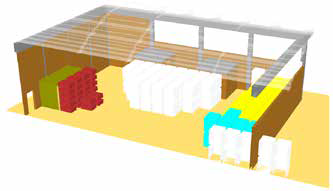 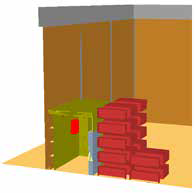 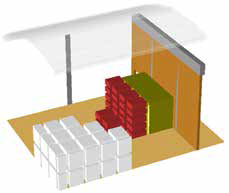 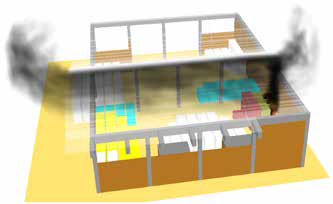 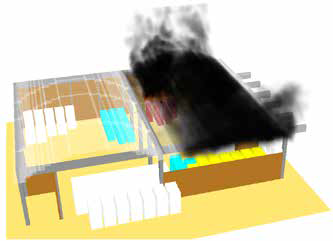 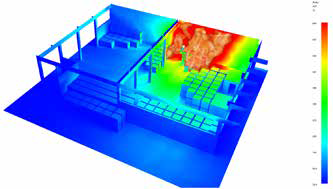 Fig. 8 - Spread of the fire and the adiabatic surface temperature of the object after 2634s 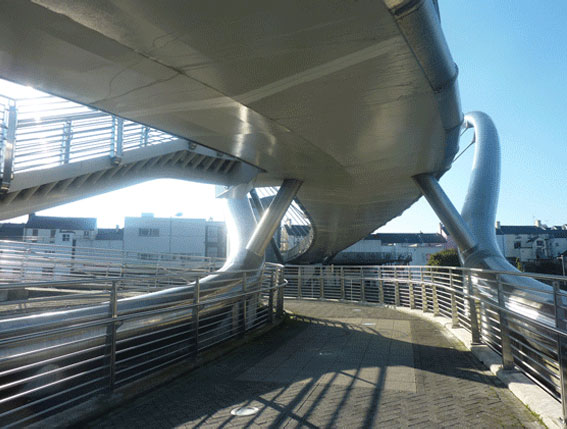 A cable stayed, stainless steel footbridge connecting the port in the Welsh island of Anglesey to the town center of Holyhead