Kitchen appliances today are also designed with the objective of reducing their environmental impact. Particularly, the design of cooker hood ventilation systems considers how to reduce their energy consumption and polluting emissions.
The improvement of the fluid-dynamic efficiency of the ventilation system is one of the main areas under examination.

The design of the latest kitchen appliances is strongly influenced by the important objective of reducing environmental impact. Extensive studies are under way on cooker hood ventilation systems with the purpose of improving their efficiency in reducing both energy consumption and polluting emissions. In addition, the European Commission, with the new regulations and energy labels on products, is encouraging companies to optimize cooker hoods by using new technologies. The improvement of the fluiddynamic efficiency of the ventilation system is one of the main areas to which many efforts are being devoted.
The primary purpose of an extractor hood is to ventilate a kitchen, removing the odors, steam, smoke, and heat that result from cooking; this is possible due to the internal ventilation system. The main part of the ventilation system, known as the centrifugal fan unit, is an impeller driven by an electric motor located inside a fan. The new European Directives have introduced a new type of Energy Label and a parameter for Fluid Dynamic Efficiency (FDE) that obliges companies to improve their methods of producing items. Computational fluid dynamic methods are a valuable tool for studying these complex phenomenon with a high degree of accuracy.
The first part of this study concerns the implementation and validation of a numerical model using our experimental data. The characteristic experimental curve is presented and compared with the different numerical results obtained. Then, the redesign of different geometric parameters was performed to optimize the flow field within the ventilation system and its FDE value. The best result obtained was then used to perform experimental tests in order to confirm the numerical data. In the final part, thermal and structural analyses were carried out to predict the behavior under operating and transport conditions.

ANSYS CFX 19, commercial computational fluid dynamics (CFD) software, was used to develop a numerical model of the centrifugal fan unit. The computational domain was comprised of the fan geometry and the impeller (realized using the Blade Modeler) (see Fig. 1).
Experimental tests were conducted to generate all the numerical data needed for the numerical validation. The necessary data related to the electric engine were collected with an experimental test and included: torque, efficiency and consumption related to the rotations per minute (RPM). The necessary data related to the mass flow rate was collected by plotting the Pressure- Volumetric Flow Rate curve on a graph. This was obtained with an experimental test using the current form of the centrifugal fan unit. The validation was performed at four different operating points.
Fig. 2 compares the numerical results with the experimental data. The maximum relative percentage error obtained in the Best Efficiency Point (BEP) was around 5% and the averaged value was around 2%. 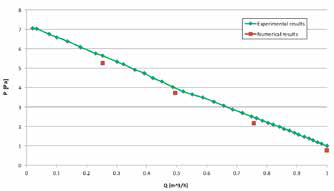 Optimization of the CFD model

The result obtained around the maximum FDE point was used to verify the flow trend inside the fan unit and consequently to modify the shapes and geometries to minimize the recirculation and backflow zones. FDE depends on the volumetric air flow (QBEP), backpressure level (PBEP) and energy consumption of the motor (WBEP), as shown in the equation below:

The following analyses were conducted for the same engine performance in order to maintain the same product cost. It was therefore important to monitor the engine torque (which influences the consumption) for all impeller designs. Considering the above equation, it was necessary to improve the mass flow rate or the backpressure of the centrifugal fan unit.
In the first part of the optimization, the fan of the present centrifugal fan unit underwent minimal changes to the inlet area and the grid located in the inlet areas to ensure safety. In the second part, the geometric parameters of the impeller were modified. The correct way to obtain higher performance is to operate the electric motor close to the point of maximum efficiency. To achieve this, a dozen or so configurations were tested by changing the number, angle and pitch of the blades. In some configurations, the numerical results showed that even if smoother flow fields were obtained, the FDE was not improved due to the decrease in backpressure. For this reason, a trade-off was chosen between the smooth flow field, the pressure increase and the torque value.

The most relevant element in terms of FDE was a seal located at the top of the blades to reduce the mass flow rate of the by-pass flow between the rotational parts.
The best configuration obtained works at RPM values close to the point of maximum motor efficiency and a higher back pressure, as shown in Fig. 3. The back pressure value is about 10% higher than the previous one and, considering that the engine consumption remains almost unchanged, the FDE improvement is about 10%.
The positive result was analyzed with experimental tests in line with European standards; these tests included the volumetric airflow test (to obtain the P-Q curve) and the airborne acoustic noise test (to calculate the noise level). These activities were quick due to the rapid internal 3D prototyping. The figure below shows the comparison for the noise level and the volumetric air flow between the previous centrifugal fan unit and the optimized fan.
At the same volumetric air flow value, the noise level decreased by about 6%. This is due to the smoother flow inside the fan, decreased by-pass flow (backflow) at the top of the impeller, and lower RPM. 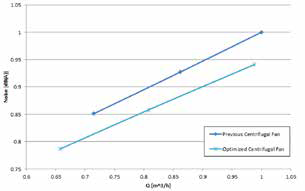 To ensure that the products comply with European regulations and internal procedures, a thermal and structural analysis had to be performed.
These static analyses were intended to determine the stress state of the plastic product (considering all the safety coefficients).The mechanical properties of the plastic material were calculated at different temperatures using experimental tests. The material is considered to be linear, elastic and isotropic. In the first part of this study, thermal analyses were performed for the plastic parts of the fan and for the impeller. In addition, the maximum RPM rotational force of the impeller was considered. The comparison between the previous and the improved geometric parts is shown in figure 5.
In the last part of the study, a static analysis of the product was conducted to simulate the deceleration that occurs during a drop test. During the drop test, the hood was dropped in three directions of drop from a height calculated according to the weight of the product (hood plus packaging). From the latest experimental tests, the deceleration experienced by the engine is around 40g. The results proved that the simulation reduced the maximum stress values of the plastic parts by making several modifications between the previous and the upgraded product, as shown in figure 6. 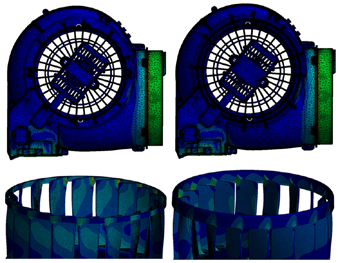 It is essential for companies today to remain competitive in the market. Numerical analysis plays a key role in achieving this goal. This study is an example of how it minimizes trial and error activities and costs and improves RFT – “right first time” – results. In addition, through CFD simulation, the FDE of the centrifugal fan unit was increased by around 10% while the noise level decreased by around 6% without any additional costs for the motor. Moreover, the maximum stress values decreased for both operating conditions and during drop tests. 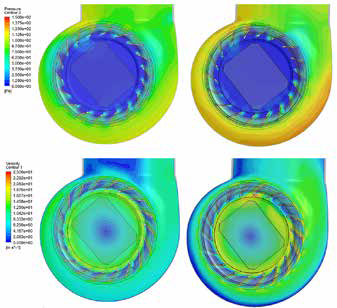 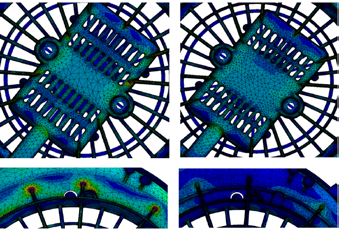 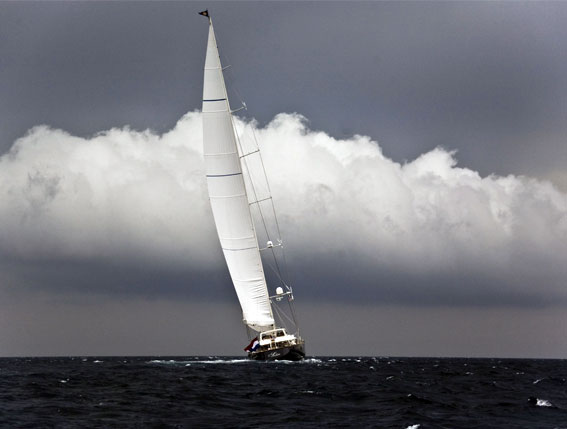 The aim of this study was to reduce the weight of the world’s tallest aluminum mast for a new series of single mast sailing yachts manufactured by Perini Navi under the brand name Salute.