One of the important lines of business for LIXIL Corporation, Japan’s largest building and equipment manufacturer, is the water technology products, such as baths, kitchens and toilets.
LIXIL is trying to introduce Particleworks, a meshless multiparticle simulation (MPS) computational fluid dynamics (CFD) tool in the research and development of these products.

One of the important lines of business for LIXIL Corporation, Japan’s largest building and equipment manufacturer, is the water technology products, such as baths, kitchens and toilets. LIXIL is trying to introduce Particleworks, a meshless multiparticle simulation (MPS) computational fluid dynamics (CFD) tool in the research and development of these products. Particleworks is developed by Prometech Software, Inc.
Dr. Miyazawa of LIXIL’s Advanced Core Technology Division explains: “I am mainly in charge of digital technology fields such as CFD simulation and virtual reality (VR). Previously, we largely focused on airflow analysis using a finite volume method (FVM) simulation tool that was effective for airflow evaluation even when toilet water flow analysis was necessary. However, since FVM requires a lot of computational resources, when it became necessary to evaluate many small droplets, such as for showers, I started looking for a suitable tool.
This was when I found Particleworks, which was introduced with the keywords “liquid splashing” and “mixing”. So, I started a trial of Particleworks. Currently, we are verifying the reproducibility of shower toilets and showerheads, water splashing phenomena in kitchens, and kitchen sink flow behavior and have already begun using prototypes for research.”

Simulation of a shower head
First example of RecurDyn-Particleworks coupling

Fig. 2 - Simulation of the shower head

LIXIL’s “Ecoful Shower” shower head product (Fig. 1) consists of a structure in which the impeller incorporated in the shower head rotates at high speed and blocks half of the shower holes. This mechanism increases the pressure inside the shower head, producing a regular shower sensation for the user, however the water consumption is 48% lower than that of the conventional water volume (10 L/minute). Besides conserving water, it is also important to optimize the water pressure and the size of the water drops to improve comfort. Particleworks was used for these evaluations.

In this shower head mechanism, the impeller rotates due to the water flow, and the number of rotations changes according to the flow velocity. Since Particleworks itself only provides a constant rotation speed regardless of the water flow, we used a coupled simulation with the multi-body dynamics simulation software RecurDyn to confirm the effects of both stable rotation speed and rotation changes.

The results of the fluid behavior simulation were generally good because they met LIXIL’s guidelines compared to the measured values. The rotation speed of the impeller gradually increased at first, decreased gradually after reaching the peak, and finally stabilized. The transition states obtained by simulation were roughly consistent with the measured values. Regarding the internal pressure of the shower head, we verified that the results almost matched the measured values. The size of the particles was measured with a high-speed camera, and the difference from the calculated value was also within the company’s guidelines. Overall, it was evaluated as a good result for a shower head simulation.

Kitchens are easier to use if they are easier to clean. To achieve this, it must be easier to flush dirt and waste to the bottom of the sink and to clean it away efficiently.
LIXIL’s new product introduced the “Niagara Flow Type”, where the bottom of the sink slopes more from the left and right edges, preventing water from spreading and flowing smoothly towards down. This allows for efficient drainage from anywhere in the sink. Particleworks was used to evaluate how effective the new shape is. The kitchen sink design was evaluated in tests based on a very large number of assumptions, including how to flush waste.

In the Particleworks simulation, we first tried to reproduce how easily it was for regularly spaced waste to flow. The analysis currently being performed checks how the waste placed at equal intervals flows. Instead of performing detailed settings by coupling Particleworks with RecurDyn, as was done in the shower head simulation, the water supply conditions were set using the Particleworks function.
Initial simulations showed that the water flowed faster, slipped more, and spread less compared to the test. The waste was also flowing unnaturally. Therefore, a test was conducted on a simple shape to obtain parameters by associating the test results with the simulation results. In actual phenomena, a film of water penetrates under the waste and surrounds it making the waste slippery.

In the Particleworks calculations, particles didn’t penetrate below the waste as easily in the first trial. This was solved by making the particles smaller. However, this required a lot of computational resources.

Through trial and error, the reproduction of water spread and the behavior of the waste were improved compared to the first simulation, and could also be improved compared to the actual test.
Although the final result for this simulation has not been obtained, LIXIL continues to try to simulate through trial and error.
Dr. Miyazawa said, “The Particleworks features are a great advantage because they allowed the behavior of the shower and the internal impellers to be easily reproduced.” 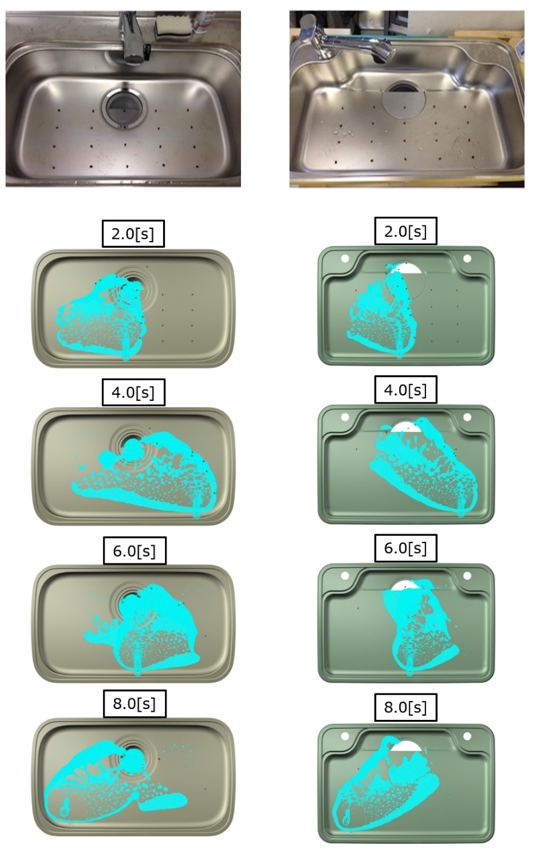 LIXIL Corporation is the largest building materials and equipment manufacturer in Japan, offering a wide range of high-quality products that support people’s lives and living with worldleading technologies and innovations based on the Japanese manufacturing tradition. LIXIL’s products are used by over 1 billion people in more than 150 countries around the world. One of LIXIL’s main businesses is water technology. It provides water-related products such as baths, kitchens, and toilets.

Fig. 3 - Difference between a Niagara Flow Type and a conventional type of sink shape

This article presents the simulation of rainfall on the outdoor unit of an air conditioner as a concrete example of this approach.