This technical article describes how engineers tackled a design optimization challenge to ensure the structural integrity of a section of the beam of a typical steel bridge whose web of main beams was subject to instability. The starting structure consisted of two 2-m high main beams each of which spanned 40 m. The structure had to be optimized to withstand both local instability, affecting a single structural element, and global instability affecting the full structure. Either type of instability could cause sudden failure in the element affected that would create extreme danger to all in the vicinity of the bridge. The CAE software returned a high number of potentially optimal designs which required the engineers to undertake further numerical simulation to identify one globally optimal solution that met the structural safety design parameters and contained the economic impact of the design changes.

It is well known that in the design of thin-walled structures, extreme attention must be made to the instability of equilibrium problem. This phenomenon involves a performance characteristics loss of the element in which it is manifested, almost instantaneous. If the is a single structural element it can be called local instability”; If the problem is a full structure it can be called global instability”. In both cases, the failure usually occurs suddenly with extreme danger.
In this work, starting from a typical steel bridge, the design optimization target was in relation to the instability of equilibrium phenomenon about the web of the main beams.
The starting structure is characterized by two main beams with 40 m of span and 2m of height. The beams are obtained by the union of three segments (one central and two lateral). The thicknesses of the flanges and web of the segments are modified, depending on the project needs.
The two main beams, following a classic constructive scheme, are internally connected together through a series of reticular substructures.
These transverse stiffening elements, in addition to stabilizing the beams during assembly, can also be used as reinforcement against the possible flexural-torsional equilibrium-type instability.
The web of the beams are further reinforced with welded ribbings. These panel types have variable sizes (typically smaller in the zones under a shear stress state joined to axial compression) depending by needs.

In order to realize the optimization process of the initial design, 6 parametric models of the structure were created, using as parameters, with the assistance of the CAE software, ANSYS, respectively:

Each model also presents a different number of transverse stiffening elements.
Due the complexity of the problem, some static simplifications were made in the analysis parametric model phase.
However, these changes weren’t influenced significantly the overall structural behavior.
The optimization was made using the multidisciplinary multiobjective software modeFRONTIER. In order to evaluate simultaneously the dependence on multiple parameters, the use of the genetic algorithm MOGA II (Multiobjective Genetic Algorithm) was needed. Through this algorithm were generated a series of models composed by models generated with recursive method.
These models offer all of the best features of the previous generations.
Because of the number of models used in optimization and the high number of parameters that each model has got in the creation of modeFRONTIER workflow, a logic node “switch” was used.

Through the appointment of a specific value of input variable associated, allow the software to do a univocal choice on the model to be used in the optimization process.
Furthermore, for the quantification of the economic impact resulting from this process, was used the total length of the welds for the fixing of the stiffening elements to the main structure.

The optimization process has produced a large number of design solutions that has been greatly reduced through the use of the Pareto Frontier. The remaining solutions are all to be considered “optimal” and for this reason a sensitivity analysis was performed to study various hypotheses made on the output parameters. This was done to determine a global optimum solution.
these solutions have characteristics which optimizing the selected output parameters:

It was observed that each model has a constant value of the weld length, therefore minimizing this parameter means to choose the design that have the minimum number of transverse stiffeners.
We used the Parallel Coordinates Chart to do a selection between the Pareto designs, obtaining six possible optimal solutions.
It wasn't possible to define an absolute optimum solution.

The final optimum solution has been chosen through static and economic considerations. The use of parameters such as a weld length, number of stiffening elements and the beam’s web thickness have directed the design choice to a good compromise of the improvements vs cost.

The selected final design is characterized by a mean value of the total improvements obtained by the various solutions founded.
The use of modeFRONTIER helped obtain important information about:

For example, the existence of a high number of transverse stiffening, associated with the presence of additional stiffening elements placed in the compressed portion of the beam produce an increase of the web displacements.
This increase is due to a low inertial state in longitudinal direction compared to a high inertial state in transversal direction. 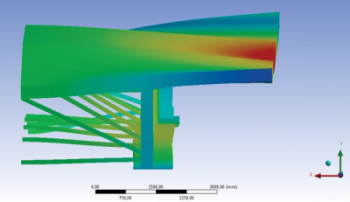 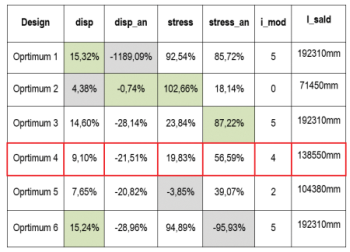 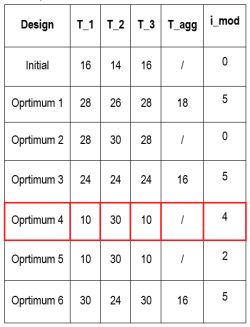 This article discusses a multi-objective optimization study to determine the optimal matrix for the routing of the actuating cable system in order to minimize the cable load on the robot and maximize the robot’s payload.