Studies of three methods: a water discharge gun, a drencher, and a firefighting drone

In recent years, some valuable cultural heritage sites, such as the Notre Dame de Paris cathedral and Shuri Castle in Okinawa, have been destroyed by fire (both in 2019). These tragic accidents and the sense of loss they provoked are still fresh in our memories. We have a mission to protect these symbols of history, tradition, and culture, and to pass them on to future generations by preventing such accidents from happening again.
In East Asia, including Japan, many historical buildings are made of wood and so there is an impelling need to prevent such fires. As a result, many facilities today are equipped with fixed and mobile water guns and drenchers that do not affect the surrounding landscape, while research and development of firefighting drones to extinguish fires in high-rise buildings continues.
The effectiveness of such firefighting equipment is generally verified by means of installation standards and on-site water discharge tests. However, conducting field tests that include all realistic fire conditions are impractical due to the cost and the physical damage to valuable buildings. It is, therefore, beneficial to evaluate the firefighting equipment’s effectiveness first by using numerical simulation. The simulation considers the total amount of water applied to the building from the water discharge, the trajectory of the water discharge, and the direction of flow. Particle method computational fluid dynamics (CFD) is well-suited to effectively handle the large number of droplets and the free surface of the water as it flows over the building’s exterior in these simulations.

This article presents simulation examples for three types of firefighting equipment using Particleworks, a CFD software based on the Moving Particle Simulation (MPS) method: a water discharge gun, a drencher, and a firefighting drone. Water guns and drenchers are designed to extinguish and prevent fires by spraying water, while firefighting drones use powdered extinguishing agents, which requires the powder model to be defined. Particleworks includes Granuleworks software which uses the discrete element method (DEM). By either coupling the functionality of MPS and DEM for liquid and powder interactions, or by using them individually depending on the target materials, the operation of firefighting equipment can be evaluated realistically.

Modeling airflow in the MPS method

MPS uses a formula that reproduces the incompressible flow of water and other substances and this formula is applied to the representation of water being released. During an actual fire, strong winds may be blowing which would affect the flow of the water discharged from the gun, so that the water doesn’t flow in the direction of the target. Moreover, even in the absence of wind, water droplets and powder flying through the air are subject to air resistance, which gradually reduces their momentum and shortens their flight distance. To simulate a water discharge gun while taking air into account, we performed calculations using an air resistance model. One way to analyze two-phase gas-liquid flow is to use the finite volume method (FVM), also available in Particleworks, and perform the simulation using FVM-MPS coupling. However, in this case, we chose to use the air resistance model to reduce the amount of computation.

Simulation of a water discharge gun in high wind conditions

We chose a wooden structure called a Yosemunezukuri, as the target building for the water gun simulation. A Yosemunezukuri has a roof that slopes in four directions and is one of the representative architectural styles of historical buildings in Japan where there were used in many national treasures such as the Great Buddha Hall of Todaiji Temple. The main shape and dimensions of the simulation model are shown in Fig. 1. Four water discharge guns are placed diagonally across the building, and the discharge angle is set at 60 degrees from horizontal so that the water can reach the top of the roof. Note that Particleworks uses CAD data in STL format to define the shape of the structure, so meshing is not required.
For the analysis conditions, the flow rate from each water discharge gun was set to 0.15m3/s (150l/s), and the physical properties of water and air were defined as general values. We set the particle diameter, which is an index of resolution when fluid is modeled as particles, to 20mm in consideration of the calculation time, and used the pressure explicit method to calculate the pressure explicitly.
Fig. 2 shows the result of a simulation of water discharge in windless conditions. Even in such conditions, the flying water droplets are subject to air resistance and the distance varies. Fig. 3 is a contour plot showing the total amount of water on the roof. The wet area can be seen, and the water discharge gun’s angle and position can be evaluated in relation to the extent of the area covered by water. Next, we simulated the water discharge gun with a strong, 25m/s wind blowing around the building. The airflow velocity field that combines spatial coordinates and airflow vectors is imported into Particleworks in CSV format. The air resistance is given by a 3D interpolation of the air velocity at each particle position.

The result is shown in Fig. 4. Since the wind is blowing to the right in the figure, we can see that the water flow is pushed away and only a part of the roof becomes covered with water. As such, it is difficult to change the direction of the water discharge with a fixed water discharge gun according to changes in wind speed and direction. It is necessary to change the direction manually at the fire site, but this is not safe.
The next step was to simulate whether the firefighting capability could be improved by using a movable water discharge gun, using a remote control to adjust the direction of the water gun according to the situation. Fig. 5 shows the area of water coverage when the gun is rotated by 60 degrees around the vertical axis in the same 25m/s wind. We can see that the area covered by water is wider with the movable type of water discharge gun than with the fixed type. The final number of particles was approximately 350,000 and the calculation time was 30 hours using NVIDIA’s GeForce GTX TITAN X GPU. If a faster GPU is dedicated to the numerical calculation, the calculation time is estimated to be several hours.

A drencher is a fire extinguishing device in which pipes are installed on the roof or exterior walls of a building, and the sprayed water forms a curtain to prevent the spread of the fire from the surrounding area. Water is also sprayed from pipes embedded in the ground surrounding the building to wrap the building in a curtain of water. Since it does not spoil the landscape, it is often used as fire-fighting equipment for cultural heritage properties.
The same building model was used for the drencher simulation. Water spray nozzles with a diameter of 100mm were configured at intervals of 5m, with a flow rate of 0.2m3/s per nozzle and a spray angle of 6° (as shown in Fig. 6) so that the water sprayed by the nozzles would spread radially. Particle diameter was set to 25mm. To verify the drencher’s effectiveness in preventing the spread of the fire, we created a situation where debris from a fire that had broken out near the building would fly in. The fire debris was modeled using DEM particles and the simulation was performed using MPS and DEM coupling. A coarse-grained DEM model was used to avoid excessive computational load, and the particle diameter was set to 50mm. Fig. 7 shows the drencher’s process of forming the curtain of water.
The water spray reaches a height of around 27m above the ground about two seconds after the water is discharged. It then descends and, about five seconds later, the curtain of water is formed, and a dynamic steady state is reached. We tracked the behavior of the moving fire debris in this state. The simulation result showed that five seconds after the fire debris reached the curtain of water, almost all of it was blocked by the curtain of water and did not reach the building. Fig. 8 shows the results of the MPS-DEM coupling analysis of the fire debris. In the simulation, some debris from the fire reached the vicinity of the building. But the actual fire was extinguished by the water flow, so the drencher’s fire extinguishing effect is deemed to be good enough. The final number of particles in this calculation was about 2 million and it took about 230 hours using an NVIDIA GV100 GPU board. In fact, further reduction of calculation time is possible by using the multi-GPU calculation capability in Particleworks.

Simulation of a firefighting drone

Fig. 9 shows the result of the simulation and the reach of the extinguishing agent from the drone. It was evaluated in windless conditions, but the extinguishing agent’s trajectory in the presence of wind can be tracked like that of the water in the example described above. Furthermore, by linking to the motion dynamics simulation, it is possible to configure more realistic conditions in which the drone flies and fights fire under the influence of wind. In this simulation, the number of DEM particles was about 90,000, and the calculation time using GeForce TITAN X was 46 hours.
This article discussed the use of Particleworks and Granuleworks to simulate fire extinguishing activities to protect important architectural buildings from fire. MPS and DEM can handle not only industrial products such as the water discharge equipment and drones discussed here, but also those used for disaster prevention in floods, tsunamis, and landslides, and in a wide range of environmental issues such as clean energy fields, which are of increasing concern in the world today. I hope that simulation technology will be used wherever possible to help protect our heritage, traditions, and culture and to realize a safe and comfortable future for everyone. 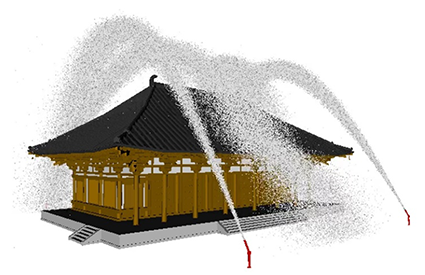 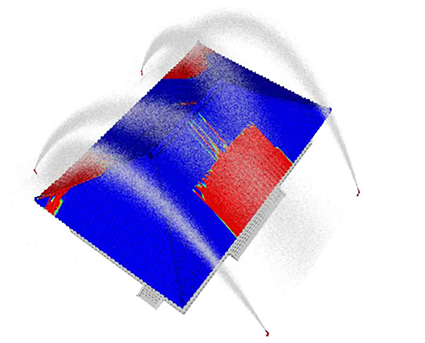 Fig. 3 – Contour plot of the total amount of water applied to the roof in windless conditions 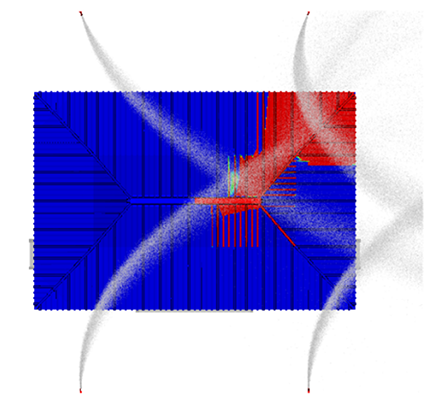 Fig. 4 - Contour plot of the total amount of water applied to the roof from a fixed water discharge gun in a 25m/s wind 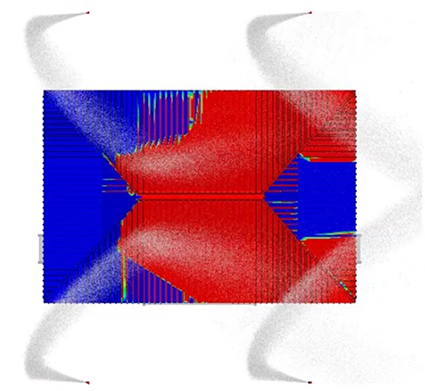 Fig. 5 - Contour plot of the total amount of water applied to the roof from a rotary water discharge gun (60° rotation) in a 25m/s wind 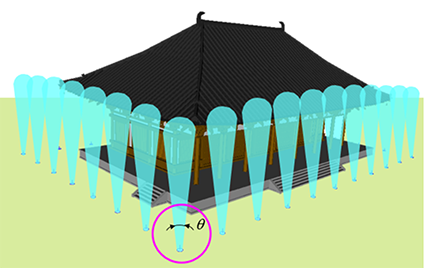 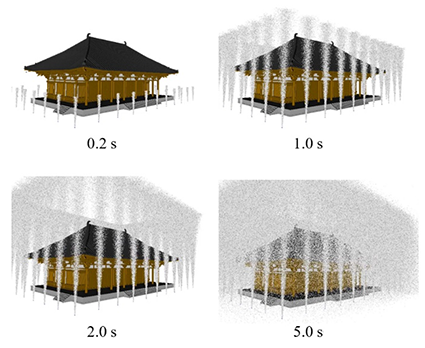 Fig. 7 – The drencher’s process of forming the curtain of water 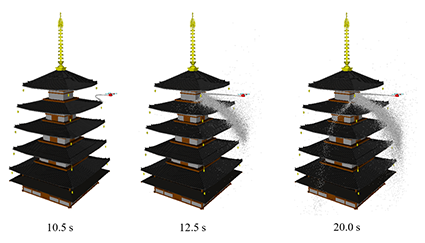 Fig. 9 – Simulation of fighting a fire on the upper floors of a wooden high-rise building with a drone

Studies of three methods: a water discharge gun, a drencher, and a firefighting drone

This article presents simulation examples for three types of firefighting equipment for cultural heritage buildings using Particleworks, a CFD software based on the Moving Particle Simulation (MPS) method: a water discharge gun, a drencher, and a firefighting drone.