Mesh morphing has proven to be a valuable tool in parametrizing numerical models to perform shape optimization.
It allows engineers to save time in generating new configurations for analysis because it does not require geometry modification and mesh re-generation.
However, engineers still have to estimate which shape modifications could improve component performance and then apply them to the baseline model before resolution. With automatic surface sculpting, the morphing action can be guided by the physics of the model that is being analyzed, allowing engineers to automatically identify the surface zones whose nodes should be moved inwards or outwards to achieve the optimization objective, saving on the time required to complete an optimization process.

In industrial production, design optimization can be the key to a product’s success. Through optimization a company can maximize profits and minimize both costs and the use of raw materials. Optimization can be a very challenging task for engineers, however, since the optimal configuration for a product must be sought while maintaining its compliance with the task for which it was designed (e.g. strength and functionality requirements). Numerical simulations, both computational structural mechanics (CSM) and computational fluid dynamics (CFD), can help engineers to test different configurations to identify the optimal one. Each numerical model represents a different product configuration that, once analyzed numerically, provides relevant information on performance indices.
Although numerical procedures have brought considerable benefits, a single numerical simulation, depending on the size of the model, the complexity and the type of analysis required, can take a long time to generate the data desired. As is well known, each numerical analysis consists of three main phases: pre-processing, in which the numerical model is created and setup, resolution, in which the numerical solution is evaluated, and post-processing, in which the numerical results are examined and analyzed.
To shorten the time required to complete the numerical analysis, improvements can be made to the first and second phases: High-Performance Computing (HPC) allows the resolution time to be reduced, whilst mesh morphing enables considerable time savings during pre-processing. Mesh morphing allows engineers to generate a new configuration for the numerical model without the need to generate the modified geometry and without the need to regenerate the computational grid. This latter task can be really time consuming in an optimization study especially for highfidelity meshes since it has to be repeated for each configuration to be analyzed (see Fig. 1).
The RBF Morph™ morphing tool has proven its effectiveness and reliability in performing this task, generating time savings of up to 80% in pre-processing while producing high-quality morphed meshes with minimal mesh distortion.

Mesh morphing also offers the ability to guide the modification of the shape of the numerical model using the physics of the model itself. The morpher tool described next is the RBF Morph™ ACT extension for the ANSYS® Mechanical™ environment. The software was released in 2015 and is based on the ANSYS® Fluent™ Add On technology that has been available on the market since 2009 (www.rbf-morph.com). Since the first version, several features have been added to help engineers in their numerical simulation activities. One of the latest features introduced is the Biological Growth Method (BGM) approach for surface sculpting. The BGM was inspired by the observation of the behavior of biological tissues: in nature, the number of tissues increases if the stresses on the surfaces reach an activation value, which changes with the type of tissue. The same approach can be applied to structural components. Furthermore, material layers are added if the stress levels are above a threshold value, and eliminated when the stresses are below the threshold. 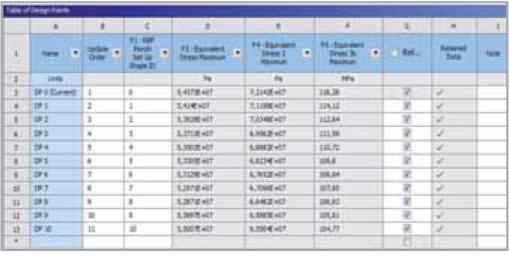 Using the BGM approach for surface sculpting has two advantages: the maximum peak stresses can be reduced and the stress distribution in the model becomes more uniform. However, since the surface sculpting is guided by the stress distribution, the resulting shape can be very complex, and can only be created on the real physical object by using innovative additive manufacturing technologies. If the manufacturing process concerned is a traditional one (such as casting, machining, etc.), RBF Morph offers an additional
function that allows engineers to respect their manufacturing constraints. The coordinate filtering option allows engineers to replicate the modification of the shape in a specific position (e.g. the position in which the maximum stress was evaluated) and to apply it along a user-defined axis (Fig.2). Both Cartesian and cylindrical coordinates can be used as filters. The highest degree of automation can be achieved by linking RBF Morph surface sculpting based on BGM with the definition of the parameter-based Design Point in ANSYS® Workbench™. The analysis can be set up so that, after solving the baseline configuration (DP 0), the analysis results are used to perform the surface sculpting. The subsequent Design Point (DP 1) is generated from the morphed configuration of the previous DP. That is then resolved and the evaluated stress distribution is used to set up another surface sculpting step. Using Workbench parameters, this procedure can be repeated until the stress levels reach the desired optimal values, as shown in Fig.3. For example, it is possible to consider the problem of a cantilevered beam: beam theory tells us that the optimal configuration for this simple static structure has a parabolic profile. If BGM sculpting is performed on a beam of constant thickness where the upper and lower surfaces are those to be sculpted, it is possible to automatically reach the shape depicted in Fig.4, which has a parabolic profile, a uniform stress distribution and a reduction in mass of 33% compared to the initial configuration. 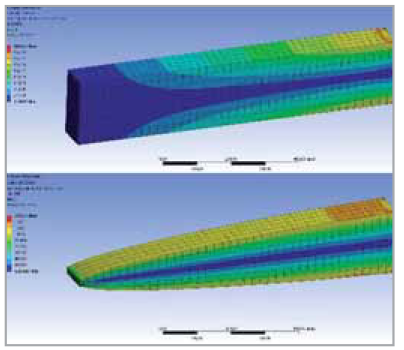 A second approach to surface sculpting with RBF Morph mesh morphing is the Adjoint approach. The Adjoint method is widely used in CFD simulations and has recently also been introduced in CSM problems. The output of the Adjoint solution consists of sensitivity to a defined objective function of a set of input parameters. If nodal surface displacements are set as input parameters, with the Adjoint method engineers can determine which surface node should be moved inwards or outwards. This information can be transferred to the RBF Morph set-up so that an automatic surface sculpting approach can be used. 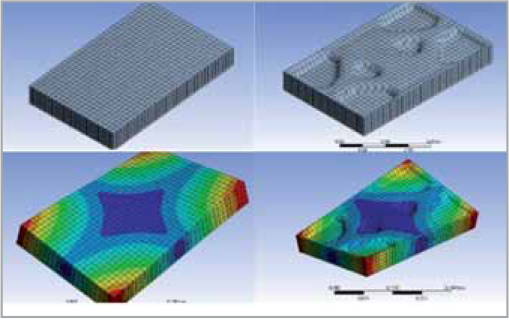 With the Adjoint approach, it is possible to define and use several objective functions as an optimization objective: not only stress level reduction (as in the BGM approach), but also mass reduction, compliance, and so on. For example, the optimization of a thick plate is shown in Fig.5. The free and undamped modes of the plate are extracted using an eigenvalue analysis. The optimization task aims to reduce the mass of the component by keeping the first eigenvalue above 1220Hz. Adjoint data was used to set up the mesh morphing, resulting in the optimized shape shown in Fig.5, which produced an initial eigenvalue of 1351.5Hz and a 20% mass reduction.

SACMI, an early adopter of the RBF Morph optimization since 2015, successfully used automated surface sculpting procedures in an exploratory study. The Italian company SACMI Imola S.C. is an international leader in the design of industrial plants. It supplies both machines and complete systems for the ceramics, metals, packaging, and food and beverage industries, and for the production of containers made of plastic and advanced materials. Due to the confidential industrial nature of the component analyzed (Fig.6), it is not possible to provide detailed data on the model. However, both automatic sculpting approaches were used to optimize the component’s stress levels. The Adjoint-based approach was successfully applied to the area identified in Fig.7a and resulted in a maximum stress reduction of 11.6% on the surface shown in Fig.7b.
The BGM approach was applied to three zones of the component (Fig.8), using the linear manufacturing constraint in hot spot area 1, the circular manufacturing constraint in hot spot area 2, and leaving the BGM algorithm free to sculpt the surface in hot spot 3 area. After 8 sequential steps, the maximum surface stress was reduced by 2.76% for hot spot 1, by 7.84% for hot spot 2, and by 8.12% for hot spot 3. Fig.9 shows the baseline and final meshes respectively, and the initial and final surface stress distributions for the three hot spots.

Fig.7 - a) Area in which Adjoint-based sculpting was applied, b) resulting stress distribution

The study presented aims to demonstrate how to perform product optimization automatically, saving on the time required to complete an optimization process. The proposed optimization strategy involves the use of numerical simulations and consists of combining mesh morphing with one of two shape-modification approaches dictated by the physics of the model being analyzed, namely the Adjoint approach or the BGM approach. The automatic surface sculpting optimization strategy was developed by leveraging the flexibility of ANSYS® Workbench™, within which the RBF Morph™ ACT extension for ANSYS® Mechanical™ allows this task to be easily performed. The surface sculpting capabilities of the morpher tool can easily be set up to be guided by the simulation results in order to automatically identify the model nodes to be moved and to generate a new optimized shape. Workbench’s parameter management allows the procedure to be iterated until the desired optimized performance indices are achieved.

Fig. 1 - Comparison between a traditional optimization workflow and a mesh morphingbased one

Fig. 2 - Comparison between a) free and b) filtered BGM surface sculpting 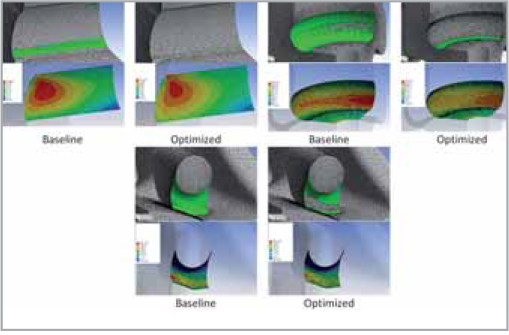 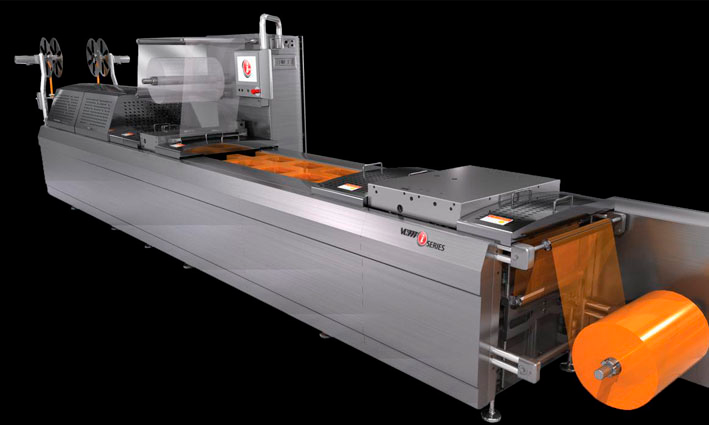 In this example, these features were tested by simulating the motion of a very thin plastic film (32µm) being dragged by two rollers.