The next phase in the EU’s ambitious nuclear fusion power generation project is the construction of a DEMOnstration powerplant. This represents the first step towards the creation of a commercial power plant and is drawing on the combined efforts of large teams of scientists and engineers across various research units. This article describes the Multiphysics optimization procedure undertaken to ensure the best compromise between electromagnetic and structural compliance for the Toroidal Field coils of the Advanced Divertor Configurations of the toroidal chamber, that holds the plasma in which the fusion reaction takes place. The TF coils are subjected to enormous Lorentz forces that are transferred to robust steel casings that hold the TF coils in place. It has been learnt that these casings should perform the dual function of shaping the super-conducting loops appropriately, and bearing the loads within a reasonable margin of safety. However, preliminary stress analyses revealed that their initial shape had structural deficiencies. FEM analyses and mesh morphing were used to optimize the shapes to the best compromise between the two functions.

The DEMO Tokamak unquestionably represents a great challenge from a technical and technological point of view. This is due not only to the Multiphysics nature of the processes that must coexist, often leading to a trade-off of opposing requirements, but also to the unprecedented range of operation experienced by each sub-system of the assembly. This paper shows the optimization strategy adopted for the Toroidal Field (TF) coils of the Advanced Divertor Configurations (ADCs), in search of the best compromise between electromagnetic and structural compliance. Ansys simulation tools were used in the steps followed towards the final goal:

The DEMOnstration power plant, DEMO, will be the successor to ITER. Unlike ITER, DEMO will be more than a large-scale scientific experiment; it will be the first step toward a commercial power plant, with the goal of producing actual electricity. For this reason, DEMO will be significantly larger than ITER, testing higher loads and posing a greater challenge than its predecessor. Thousands of scientists and engineers, split across various research units, are making extraordinary efforts to achieve the conceptual design of such a machine.
With reference to Fig. 1: the fusion reaction takes place inside the plasma, producing a large amount of energy at the expense of a small portion of mass. The plasma, at extremely high temperatures, is held in a toroidal chamber by a strong magnetic field, avoiding contact with any part of the assembly. An important component of the magnetic field is generated by the Toroidal Field coils: large D-shaped devices wound with superconducting materials that form electrical circuits in the radial planes containing the machine axis. Superconductivity occurs in some materials below an extremely low critical temperature (< 20 K for most cases). The superconductors are arranged in a compact array called a Winding Pack (WP); supercritical helium is used for cooling, enabling very stable superconductor behavior. The setup of the magnetic field is quite complex: a large amount of equipment (Toroidal Field coils, Poloidal Field coils, Central Solenoid) is devoted to creating a field with the desired characteristics to which the circular motion of the plasma also contributes. As a result, the conducting TF coils undergo enormous Lorentz forces that are transferred to the structural supports. The superconductors are contained in robust steel casings that hold them in place and bear these electromagnetic loads. It has become clear that these casings should perform a dual function: on the one hand, shaping the super-conducting loops appropriately, and on the other hand, bearing the loads within a reasonable margin of safety. However, the initial shape of the ADCs was designed mainly to accomplish the first function with consequent deficiencies from the structural point of view, as evidenced by the preliminary stress analyses

Preliminary EM and structural analyses of the DEMO ADCs

The basic configurations of all the ADCs – Single-Null (SN), Double-Null (DN), Snow-Flake (SF) and Super-X (SX) – were subjected to preliminary electromagnetic (EM) and structural analyses. Both types of studies used Ansys APDL as the simulation environment. The EM analyses considered electricity flowing only in the TF coils, as hypothesized for the magnetization stage, and were aimed at obtaining the Lorentz forces acting on the superconductors. Stress evaluation followed the EM analyses: loads were transferred simply from one model to another by maintaining the same mesh (with nodal loads attached) for the superconductor bodies.
The structural model of each ADC involves a single coil and two half-coils on either side (for a total of two coils), as seen in Fig. 2. 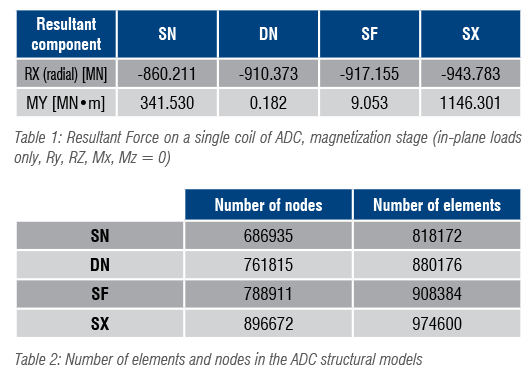 Each coil consists of the external casing with the superconductors inside. A frictional contact condition is established between the superconductors and the casings, and between the different casings. The outer intercoil structures firmly connect one coil to the others. Table 1 lists the resultant radial force (RX) and resultant angular moments around the toroidal direction (MY) acting on a single coil for each ADC. Table 2 shows the number of elements and nodes for the structural models. Fig. 3 shows the Von Mises (VM) stress distribution over the ADC casings, revealing that large areas of material are above the assumed stress limit (700 MPa).

Iso-stress shape of the coil

The optimal shape of a coil, from a structural point of view, is one that undergoes only membrane stresses during the action of loads. This particular condition is achieved with a radius of curvature proportional to the radial coordinate at each point on the coil track. For each baseline coil shape, the corresponding isostress profile was constructed according to the additional rule of always being external, or at least tangential, to the former shape. Fig. 4 shows the overlaid initial and optimal coil shapes for each of the ADCs.

For each shape of the ADC, the optimization workflow identified a compromise shape between each pair of associated baseline and iso-stress profiles, modifying the initial shape the absolute minimum to achieve structural integrity.

The optimization workflow was assembled according to the block diagram in Fig. 5 in the multidisciplinary Workbench platform, taking full advantage of its modular architecture.
Auxiliary geometries were imported from an external CAD to identify the shape of the coil before (baseline) and after (isostress) the transformation. Meshing these geometries (within a Structural module) was just a matter of convenience to make the surfaces parametric. A simplified TF coil model was introduced, representing only half of a single coil with symmetry constraints at the boundaries. RBF Morph was used to define and apply a continuous transformation to the coil shape by acting directly on the numerical model, without any attached geometry, accelerating the entire process, as shown in Fig. 6.
A series of intermediate coil configurations was obtained by starting from the auxiliary geometries and linearly scaling the transformation that converts the baseline shape into its iso-stress counterpart with a blending parameter between 0 and 1. The models obtained by the described procedure were fed to an APDL module for EM and structural analyses. Observation of the results in terms of Von Mises (VM) stresses allowed the lowest blending parameter whose associated coil casing had less than 1% of the external volume (i.e. the volume of the curved segment of the casing) above 450 MPa of VM stress to be identified for each ADC. Four candidate shapes for the ADCs were selected such that a satisfying margin of safety was ensured while minimizing the shape change from the baseline configuration. Fig. 7 summarizes the output of the optimization process, showing the evolution of the ADCs by increasing the blending parameter from 0 to 1 at intervals of 0.1, with the candidate shapes framed in red.
Fig. 8 shows the VM stress distribution on the ADC casings for the baseline and candidate configurations. The external casing volume percentages >= 450 MPa of VM stress were 12%, 18%, 8% and 12% for the original SN, DN, SF and SX shapes, respectively; after optimization, these had been reduced to <1%. A FEM model of the candidate SN shape based on the new geometry and removing all the simplifications introduced to accelerate the workflow was built from scratch as an optimization output. The results obtained after the EM and structural analyses of this brand new model were compared with the first one selected after the optimization (and including only one half of the structure); the comparison confirmed the satisfactory level of approximation of the model used for the optimization procedure, despite the simplifications introduced.

The TF coils of the DEMO ADCs were originally designed to generate a magnetic field with specific characteristics. Their original shapes were not well-suited to withstanding the enormous Lorentz forces from EM interactions. In this paper, we presented an optimization procedure based on FEM analyses and mesh morphing that can find compromise shapes for the TF coils between their original configurations and a structurally optimal, iso-stress profile. The proposed workflow was able to successfully find the minimum shape modification for each ADC in order to reduce the stress level to below a specified threshold.

This work has been carried out within the framework of the EUROfusion Consortium and has received funding from the Euratom research and training programme 2014-2018 and 2019- 2020 under grant agreement No 633053. The views and opinions expressed herein do not necessarily reflect those of the European Commission.

This work is being presented in the Energy session of the International CAE Conference and Exhibition 2021. 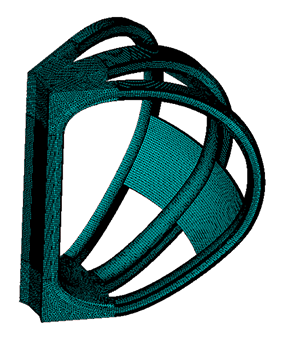 Fig. 2 - Example of the structural model. 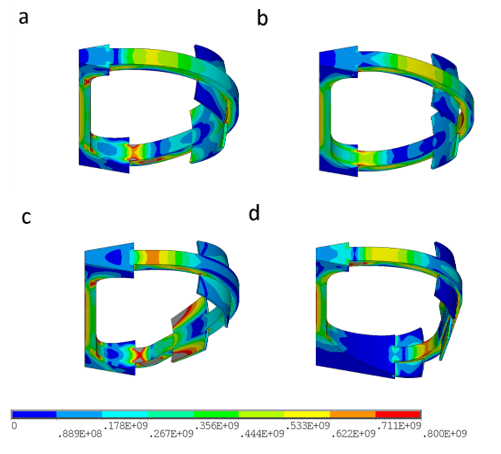 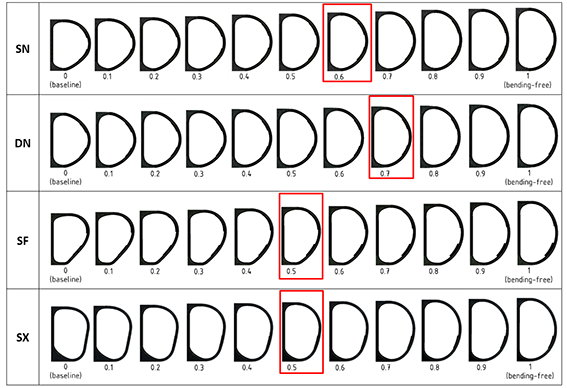 Fig. 7 - ADCs shape progressions from the initial baseline to the ideal iso-stress configurations. The profiles selected are framed in red.

Fig. 8 - VM stress maps of the DEMO ADCs for the baseline and candidate casing shapes. 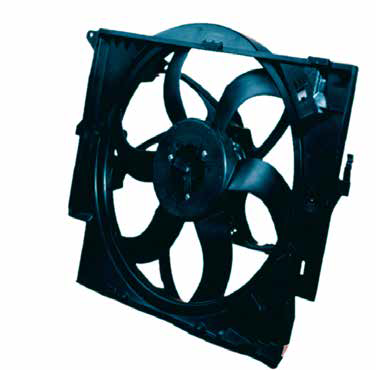 ptimization of the product starts with a strong correlation of the model with specifically designed tests under controlled conditions.