Refining the design of a spout for a laundry detergent

In this case study, LION Corporation uses Particleworks to simulate fluid flow to improve the design of a new cap spout for its new HARETA brand of laundry detergent. The HARETA liquid laundry detergent contains a polymer to increase its viscosity. It has a non-Newtonian viscosity meaning that the liquid tends to be less viscous during the pouring process. Instead of using its traditional design method of creating 100 product prototypes using 3D printers, the design engineers, with Promotech’s cooperation, created a simulation of the new bottle cap spout design and compared it to a conventional product to improve the pouring and measuring performance of a dose of laundry detergent.
The simulation enabled the engineers to calculate the velocity gradient and observe its effect on the whole flow-down phenomenon.

Refining the design of a spout for a laundry detergent

LION Corporation produces health care products such as toothpaste, detergent, soap, etc. The company, which has a long 120-year history, faces a rapidly-changing business environment due to the recent phenomena of an aging society, rising health awareness, and technological demands that affect the planning and development of products and services using digital engineering.
LION’s Container and Packaging Engineering Research Laboratories is responsible for designing and developing containers and packaging for all LION products and has used CAE simulation for over 30 years. Their use of CAE is increasing year by year due to business acceleration and diversification, as well as changes in the laboratories.

In the past, during conventional product development, the company used a 3D printer to make nearly 100 prototypes of a spout cap design, from which they chose the most suitable design. This time, with the desire to more scientifically verify the designs, with Prometech’s cooperation, the company decided to use fluid dynamics simulation with Particleworks, in addition to the 3D printer experiments, for the design of the cap for the new HARETA brand, launched last year. The concept of HARETA, a liquid laundry detergent that contains a polymer to increase its viscosity, is that it always leaves clothing feeling like it has been air-dried on a clear day. The detergent has a non-Newtonian viscosity meaning that the liquid tends to be less viscous during the pouring process.

Generally, users want to pour the measured dose as quickly as possible, so they unconsciously raise their elbows and tilt the bottle to pour the detergent more quickly. This tendency becomes stronger with high viscosity liquids. This results in the spout becoming blocked by the liquid, so the flow isn’t constant. In addition, because the measuring cap is small and the liquid’s viscosity is high, the detergent may spill and splash the surroundings. To avoid this, the designers wanted to ensure that the flow-down of the detergent could be measured in a comfortable time. Therefore, they changed the design of the spout cap to improve the detergent’s flow-down velocity. Fluid dynamics simulation was performed with the objective of improving the measuring process.

During the Particleworks simulations, a conventional cap model was used to calculate the relationship between the spout cap’s configuration and the flow-down velocity in order to have a reference point to compare the flow behavior of the new HARETA designs. The liquid flows from the hole of the cap, moves down through the wall of the spout and falls into the measure. The simulation confirmed that the flow velocity was low as a result of flow resistance near the spout wall, and that the flow velocity increased further away from the wall. Therefore, the designers predicted that the flow-down velocity would be improved by expanding this inner area. Fig. 1 compares the geometry models of the newly developed spout cap for HARETA and a conventional spout cap.
Fig. 2 shows the conditions of the flow-down simulation performed using each of these caps. When the detergent is poured, one cannot ignore the air entering the bottle when the liquid surface of the detergent is higher than the opening. This simulation did not specifically consider the influence of air but it defined the detergent amount to not completely fill the opening. In addition, the tilting motion was calculated by applying a forced rotation so that the bottle gradually tilts to 110° between 0 and 0.6 seconds after the start of the pouring motion. As can be seen from the graph in Fig.2, the simulation divided the bottle tilting operation into two steps to reproduce so-called ordinary human movement on the bottle movement as closely as possible. The machine used in LION’s experiments can only tilt the bottle at a constant speed, while simulation allows them to reproduce human-like behavior more flexibly. The flow-down simulation was performed to compare the spout cap models of HARETA and the conventional product, using these conditions.
Fig. 3 compares the velocity distribution of the longitudinal section of the bottle cap while Fig. 4 compares the velocity distribution of the transverse section of the bottle cap. This demonstrates that the HARETA cap design has a larger area with high flow velocity. Moreover, experiments on the flow-down velocity using the combination of the newly developed cap for HARETA showed that the HARETA composition was improved by 140%.

Particleworks allowed the CAE engineers to calculate the velocity gradient and the simulation made it possible to observe how much it affected the whole flow-down phenomenon. When the detergent flows down, its velocity is not uniform, slowing near the spout and increasing further away. In future, the engineers hope to use simulation to visualize the differences in velocity gradients due to design changes, feed back the simulation results to the design values, and study the optimal design.
In addition, they believe that they can use simulation as a tool for design inspiration because such understanding would often be the origin of new ideas in the design process. The development of this new spout cap was selected for excellence at the Japan Packaging Technology Research Conference in 2018. 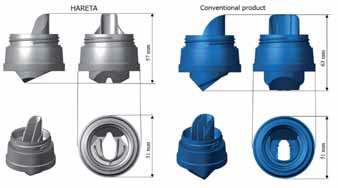 Fig. 1 - Comparison of spout cap design for HARETA and a Conventional product 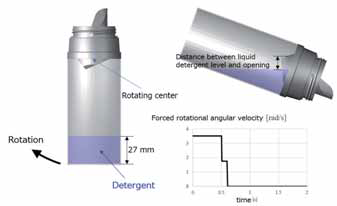 Fig. 2 - Settings of detergent amount and definition of the forced rotation 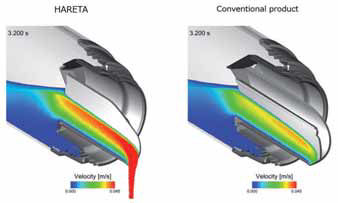 Fig. 3 - Comparison of outflow velocity distribution of detergent in longitudinal section of the HARETA spout cap and the conventional product spout cap 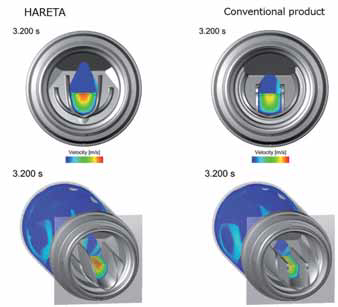 Fig. 4 - Comparison of outflow velocity distribution of detergent in a transverse section of the HARETA spout cap and the conventional product spout cap

Lubrication and heat dissipation in transmissions and bearings

Transmission design is mainly based on the mechanical aspects of the transmission and lubrication is an aspect that is verified, and eventually corrected, based on bench testing, i.e. once the design phase has been completed and a physical prototype is available.