Today, many outdoor installations of electrical appliances are increasingly exposed to extreme weather patterns, particularly torrential rainfall, resulting from climate change. Typically, these appliances undergo a rain test during design to determine the potential for water penetration and damage to important internal components. However, these tests usually do not reveal where the water penetration occurs. Numerical simulation can predict rainwater penetration and its penetration path to inform relevant design changes and waterproofing measures for improved product performance. Such studies represent complex free-surface phenomenon simulations for which Particleworks is particularly well-suited.

This article presents the simulation of rainfall on the outdoor unit of an air conditioner as a concrete example of this approach.

Many electrical appliances around the world are installed outdoors where they are continuously exposed to the elements. In designing these appliances, a rain test is performed in a shower to evaluate the effectiveness of the waterproofing and to examine the possibility of water penetration and damage to important internal components.

However, while these tests can determine whether water has penetrated the product, it is not easy to determine where it entered. In order to develop these products more efficiently, numerical simulation can be used to predict the intrusion of rainwater and its path into the product so that appropriate design changes can be made and waterproofing measures can be taken before prototyping to improve product performance.

Rainfall or the flow of agglomerated raindrops on a product represent a complex free-surface phenomenon. Particleworks, a particle-based computational fluid dynamics (CFD) software that can efficiently process water droplet behavior and free-surfaces, is well suited to simulating such problems.

In this article, we will introduce a simulation of precipitation on the outdoor unit of an air conditioner as a concrete example of dealing with such a problem. Initially, the problem was posed as a challenge by the manufacturer, Blue Star Limited in India, where it often rains heavily. In recent years, torrential rains, which are considered to be an abnormal weather condition resulting from climate change, have occurred every year in many parts of the world. As a result, appliances installed outdoors need to be more waterproof than ever before.

These waterproofing measures extend the life of the product by preventing critical electronic components from being exposed to water, compromising product functionality and also prevent corrosion of internal components if they are exposed to water. For outdoor units, this includes reducing the ingress of water through the large front grille openings used to control airflow as much as possible.
Numerical simulations play an important role in detailing the behavior of these raindrops, identifying the path of water penetration into the product, and using this information for waterproofing measures.
Fig. 1 shows the actual precipitation test. Assuming torrential rain, the amount of rainfall is set to 80mm per hour. The turntable on which the product is placed rotates slowly, allowing raindrops to hit the product from all directions, while two blowers behind the test chamber constantly blow strongly. Fig. 2 shows the model geometry prepared to evaluate the product by simulation under these conditions. 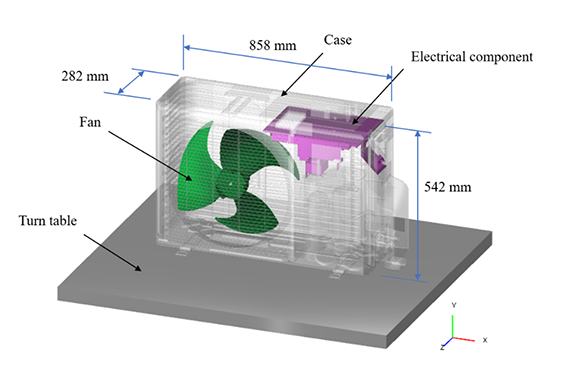 Fig. 2 - Geometry of the simulation model

Overall, the dimensions of the product are approximately 860mm wide, 540mm high, and 280mm deep. Although the actual product is composed of many components, the simulation models only the major components that affect raindrop behavior: enclosure, fans, turntables, and electronic components to be assessed for water damage.

Particleworks does not require meshing and the CAD data itself can be used directly for simulation, so there is no need to spend a lot of time on pre-processing. Importantly, the product has a small gap above the handle through which raindrops may enter. The width of the opening is only 0.95mm, but since it is close to the electronic components, the possibility of raindrops entering from here cannot be ignored.

The water sprinkling from the shower was set as an analysis condition. In the test, three rows of showerheads were installed at a height of about 2 meters from the product. However, only the water from two rows of showerheads had an effect, so eight showerheads were modeled for the two rows that would be needed for the simulation. In Particleworks, we created an inlet above the showerheads and set a flow rate of 80mm per hour, similar to the test. Considering the precipitation and the area of the sprinkler holes, we defined the flow velocity as 2,000mm/s. As boundary conditions, the fan speed inside the outdoor unit was set to 3,600rpm, and the turntable speed was set to 2.3rpm, estimated from the test video.

We also had to consider the effect of airflow. In order to reproduce the actual rainfall test, we had to consider the effects of the airflow generated by the fan and its rotation on the trajectory of the raindrops inside the outdoor unit. Such an airflow field can be obtained by modeling the air around the outdoor unit with particles, but this is not efficient in practice due to the large number of particles.

In this study, the results of the airflow field calculated by general CFD software were imported into Particleworks as a set of spatial coordinates and velocity vectors in CSV format, and the airflow field was examined as shown in Fig. 3. This airflow field can be used to calculate the state of the raindrops under the influence of wind as a so-called one-way coupling simulation.

The water falling on the entire outdoor unit of the air conditioner was modeled with 2mm diameter particles for practical reasons of calculation time. However, this model geometry has a 0.95mm gap above the handle, so a smaller particle size had to be set to model the particles passing through this gap.

Particleworks provides a feature called “zooming” that allows the spatial resolution, or particle size, of certain areas within the analysis space to be fine-tuned. The zooming function is also intended to reduce the computational load. As shown in Fig. 4, in this simulation, a single particle with a diameter of 2mm that reaches the vicinity of the gap is replaced with approximately 500 particles with a diameter of 0.25mm, and a high-resolution calculation without partial increase in the number of particles in the entire analysis space is performed.

Fig. 5 shows the simulation results. Water was sprinkled from the eight showerheads and fell onto the outdoor unit. The test confirmed that the surface of the electronic component box was covered with water. The simulation also shows that water droplets adhere to the box.

Fig. 5 - Comparison between the test and simulation results

Here, we plotted the streamlines of several particles and found that there are two major infiltration paths. One is the path shown by the green line, where particles entering the enclosure through the front grille hit the rotating fan blades and are blown away towards the top of the electronics box. The other is the path indicated by the pink line, where the fan’s airflow also blows particles entering through the grille up towards the electronics.

Next, we focused on the behavior of the raindrops around the small gap. As mentioned earlier, we used the zooming function here to create particles with a 0.25mm diameter. Looking at the aperture from the inside, we could see that raindrops were entering through the gap, as shown in Fig. 8.

Therefore, the ability to visualize the ingress path of the raindrops, which is difficult to observe in the actual test, is a great advantage of simulation.
As mentioned earlier, it is not easy to identify the path of water penetration into the product simply by testing the actual product and then applying waterproofing and water damage countermeasures in the early stages of design.

Fluid simulation with Particleworks can be applied to the design and development of various home appliances to apply waterproofing and water damage countermeasures more accurately and efficiently. The simulation presented in this paper uses the 3D CAD data of the outdoor unit of an air conditioner, actual test results, and photographs provided by Blue Star (India). This study was also presented at the International CAE Conference held in November 2020. 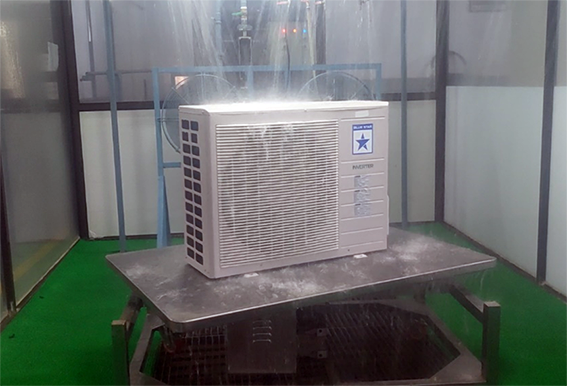 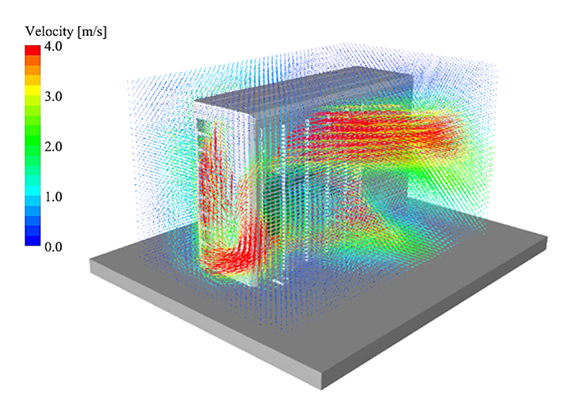 Fig. 3 - Air-flow field inside and outside the outdoor unit 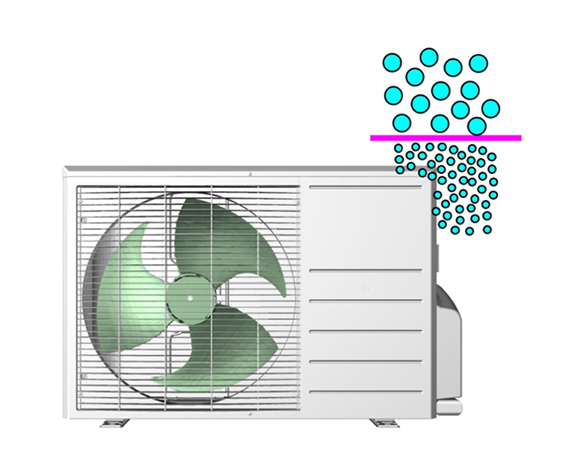 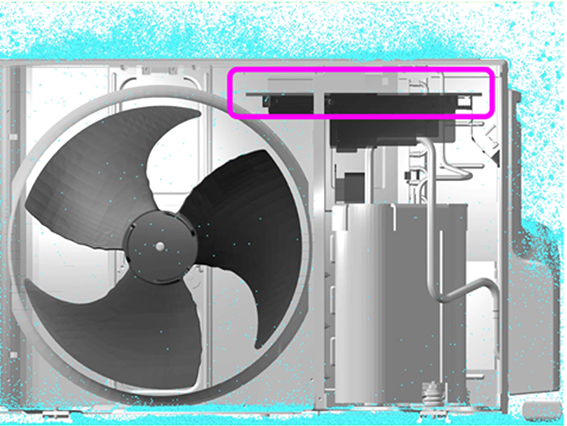 Fig. 6 - Raindrops in the outdoor unit

Fig. 7 - Plotting the streamlines of the main paths of the raindrop particles entering the unit 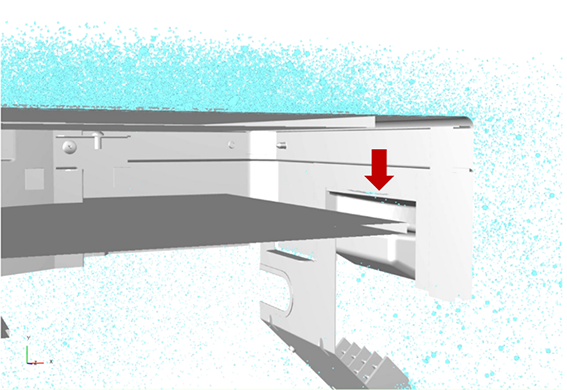 Fig. 8 - Raindrops entering through the gap

The objective of the study was to create a virtual model of Climaveneta’s new ACU171 Expanded Close Control Unit and then match the numerical results with the experimental measures.