Metal additive manufacturing (AM) is widely used in Formula One, motorsport and racing to manufacture complex parts in a short time. Power Bed Fusion (PBF) technologies, such as selective laser melting (SLM) and direct metal laser sintering (DMLS), are currently used to manufacture parts (e.g. exhaust systems, aerodynamic inserts and wings, pipes, roll hoops, etc.) in aluminum, titanium, Inconel and other high-performance superalloys [1,2]. The main success factors driving the increased use of metal AM in motorsport are the maximum freedom assured during the design phase; and the possibilities of manufacturing lightweight parts, using complex geometries, and using lattice structures with controlled variable densities. Nevertheless, metal AM is not synonymous with perfection; it has its own limits and constraints. One of its critical issues is the distortions that occur to the part during the laser melting process. In particular, this happens with thin-walled titanium components, which frequently deviate from the nominal 3D CAD geometry despite stress-relieving treatments. The use of simulation tools to limit and compensate for the distortions can dramatically reduce the risk of scraps and delays in delivery, and the related costs.

This paper presents the RENAULT F1 Team’s AM process for an aerodynamic insert in titanium Ti6Al4V. Production was optimized by identifying the best orientation for the parts and the best positioning for the support structures in the melting chamber, in addition to using the ANSYS Additive Print module, a simulation software useful for predicting the distortion of a part and for developing a new, 3D, compensated model that guarantees the best “as-built” quality. 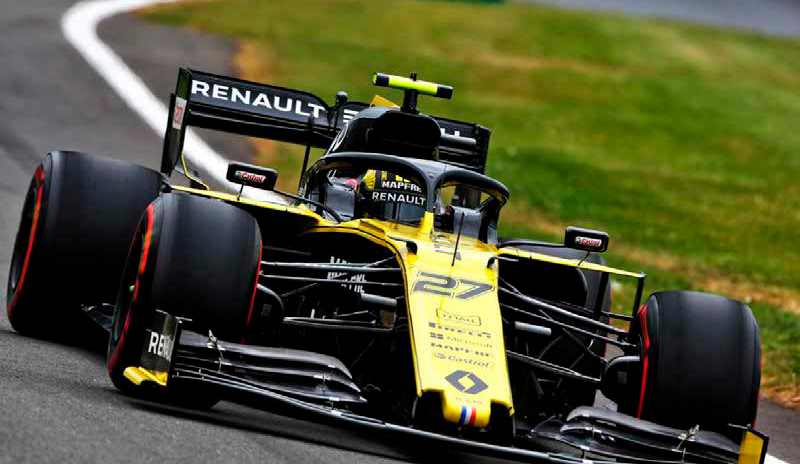 Power Bed Fusion (PBF) technologies, such as selective laser melting (SLM) and direct metal laser sintering (DMLS), are currently used to manufacture parts (e.g. exhaust systems, aerodynamic inserts and wings, pipes, roll hoops, etc.) in aluminum, titanium, Inconel and other high-performance alloys [1,2]. As a result of the wide range of parameters and variables in the SLM/DMLS processes, there are often several ways to print the same part, each with different manufacturing times, costs and quality levels. Moreover, the current limitation of 3D printing renders some 3D models more expensive, or even unfeasible, by AM.
The most critical limits and constraints of metal AM are:

It is, therefore, useful to fine-tune the 3D model of the part to reduce the AM cost, achieve a better trade-off between quality and cost, or ensure the realization of a suitable part by AM. The Design for Additive Manufacturing (DfAM) guidelines support designers in achieving this objective, enabling them to understand the real strengths and weakness of the technology in order to maximize the first and limit the second.
One aspect addressed by DfAM concerns the simulation of laser melting to predict and correct the distortions that can occur in parts during melting.
The high energy density and, most importantly, the rapid solidification causes residual stress whose intensity depends on: the building strategy; the part’s orientation in the melting chamber; the presence/ absence of support structures; the geometry, density, mass and distribution of the supports; and the thermal conditions. Residual stress induces distortions in the as-built part, even before the supports are removed, resulting in differences between the nominal dimensions of the 3D CAD model and the real shape and dimensions of the AM part. Manufacturers usually manage this critical issue with a “trial and error method”, or by taking decisions based on their own experience. However, if they are not correctly engineered, parts can be out of tolerance at the end of the process, meaning they are discarded, resulting in higher costs and longer delivery times. As a result, the prediction of and compensation for distortions is a fundamental objective.

Knowledge of material properties is essential to understanding how the powder changes in the melt pool and how it creates the part, layer by layer. The first aspect occurs at a microscopic scale, while the latter occurs at a much larger scale. Hence, a multi-scale approach is required to predict the possible results of the AM process.
Modern CAE simulation tools offer new opportunities to add value and diversify a company’s services in this area by providing the ability to re-design the product from the beginning using advanced simulation tools that can accompany the entire product development process.
Once the shape of the part has been defined, the designer and the manufacturer can shift their focus to the AM production process, in order to predict possible defects or non-conformities, and to better manage the parameters of the 3D printers. Simulation plays a decisive role thanks to modern techniques that can virtually reproduce the printing phase, analyzing the complex multi-scale and multi-physical (thermo-structural) phenomena in a transitory manner. This phase becomes even more appealing when performed via a direct interface between the 3D printers and the simulation software, allowing the file in the print format to be read and the metallurgical quality (porosity, residual stress, anisotropy, etc.) of the material to be forecast.

The main factors driving the increased use of metal AM in motorsport and racing are weight reduction; maximum design freedom; the use of high-performance materials; and short lead times. One of the most important uses for AM in Formula One concerns aerodynamic inserts and wings, with their complex geometries, internal cavities, and thin walls. Thanks to its strength and stiffness, Titanium Ti6Al4V is the best material to use for heavily loaded aerodynamic structures like the one shown in Fig. 1.
For a part like that, the most critical requirements concern:

Motorsport and racing impose short lead times, this means that parts must be printed properly at the first attempt without distortions that generate scraps. This is the core challenge for both the manufacturer and for the simulation software, which must be able to model the melting process without excessive computing time.

Optimization of the AM process

The optimization project described in this paper was produced by a team of experts – in materials (University of Modena and Reggio Emilia), in metal AM (Additiva Srl), and in the virtual optimization of the AM process (EnginSoft SpA). The process to evaluate the best configuration for the part to be printed was developed as follows:
A. Printing a reference shape and measuring the distortion to calibrate the model
B. Executing a set of rapid simulations to identify the best orientation/positioning for the part inside the build platform
C. Analyzing the distortion tendency (maximum and average displacement)
D. Analyzing the process time

Table I - Results of screening on part orientation

A. Model calibration
In order to configure the 3D printing machine set-up and the laser parameters identified to melt the aerodynamic wing part, a crossshaped sample was printed using a CONCEPT LASER M2 system. This sample was measured to establish its deviations from the nominal ones used by the software in order to calibrate the model’s response. This approach is used in the preliminary stages of modelling to accelerate computing time while ensuring that the model suitably represents the process.

B. Orientation and positioning
Four positions were developed for the part, as shown in Fig. 2. Two of them (2 and 3) were selected to minimize the printing time (minimum job height), while the other two (1 and 4) were expected to result in a minimum mass for the supports in the critical areas of the part.
The software enables the maximum displacement of the part to be estimated, and the areas where that distortion is expected to be identified. Table I summarizes the results of this screening phase (the qualitative levels of distortion and the workload necessary to remove the supports was assessed by the manufacturer based on experience).

C. Analysis of the distortion tendency
The third step consisted of developing a compensated geometry. ANSYS Additive Suite simulates the laser melting process, predicts distortions, and develops a new compensated geometry by reversing the distortion effects. The melting of this new compensated geometry should significantly reduce the distortions, resulting in a part as close as possible to the original 3D model.
Fig. 3 shows the new compensated geometry. A maximum displacement of 0.70 mm was observed on the red surface. The slight difference from the analysis described in (B) was due to the simulation assumptions: in this case, to obtain a better estimate of the distortion, a finer mesh was used in addition to the actual scan pattern.
The part was printed both using the uncompensated geometry (not shown) and the compensated geometry for Orientation no. 4 (Fig. 4). 3D optical scanning was used to measure the surface of the part in three scenarios: after the melting process (with parts and support structures still attached to the build platform); after stress reduction; and after removal of the supports. The results of the dimensional measurements, shown in Fig. 5, are in agreement with the simulation result in terms of position, maximum and minimum deviation from the nominal values, as well as the tendency towards improvement by moving the solution from four different orientations.
The comparison between the simulation results and the 3D scans of the printed parts clearly shows how it is possible to obtain an accurate output through simulation, which can predict the location of the maximum distortions in the upper part of the component.
Just from the preliminary simulations, it was possible to keep the maximum distortion below 0.59 mm. Compensation further improved the quality of the part, with a maximum displacement of 0.48 mm and a lower average and standard deviation of the absolute value of the distortions. These results were achieved with a single simulation iteration; better results could be achieved with more iterations in order to better estimate the effects of distortion, and thus generate a more effective compensated geometry.

Metal AM allows new complex parts to be designed and produced in a very short time. This is particularly true in demanding fields like motorsport and racing, where mechanical properties (elastic modulus and strength) are mandatory, with minimum manufacturing times to rapidly introduce new solutions for each race. This project has shown that it is possible to print complex parts that conform to design specifications through a correct understanding of the SLM/DMLS process and use of simulation tools.
Through rapid simulations on simplified models, it is possible to study the effects of different part orientations and to identify the most promising one in terms of the distortion tendency. This also makes it possible to identify areas affected by high displacements and, if necessary, to locally modify the support structures.
Using a more accurate model, it is possible to predict the distortion range and generate a compensated geometry that allows parts closer to the nominal geometry to be manufactured. This approach has the potential to further extend the DfAM field, including not only classical topological optimization, but also the design of parts and processes that minimize residual stress or distortion. 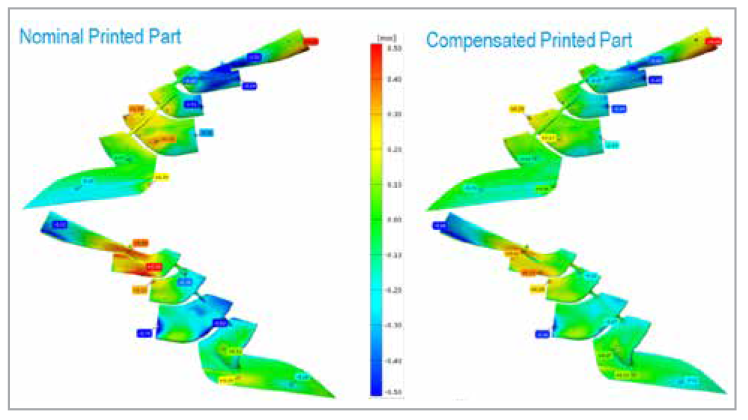 Fig. 5 – Distortion comparison between the nominal part (left) and the compensated part (right)

The authors would like to express their deepest appreciation to the collaborators and technical staff who gave us the opportunity to complete this project. Special gratitude goes to the RENAULT F1 Team whose contribution was fundamental in directing the project, especially its dissemination.

The most powerful simulation solution for metal additive manufacturing

This comprehensive solution spans the entire workflow — from design for additive manufacturing (DfAM) through validation, print design, process simulation and exploration of materials. 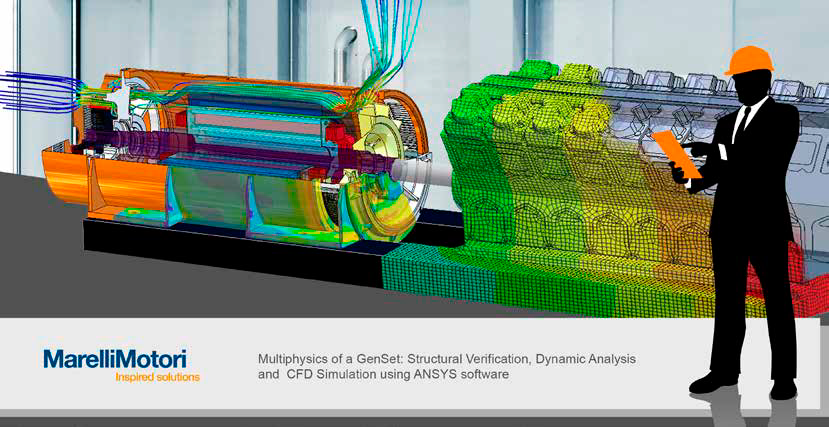 Improving efficiency while reducing cost is a very complex engineering challenge. Marelli Motori makes extensive use of CFD and FEM multiphysics simulation to do just that in the design of its electrical motors and generators.