Hollow fiber membrane oxygenators (HFMO), which have been used since the 1950s to provide patients with temporary (up to six hour) oxygen support during a cardiopulmonary bypass (CPB), are today being increasingly used for other therapies, such as acute respiratory distress syndrome (ARDS), and chronic obstructive pulmonary disease (COPB), that can last for up to 20-30 days at a time. This extended contact time between hollow fiber membranes and blood increases the complications of the natural blood biochemical process of “coagulation”, which diminishes oxygen transfer and increases the pressure drop, ultimately causing the oxygenators to fail. The study described in this article was designed to obtain greater insight into the gas transfer mechanism at microscopic scale using computational fluid dynamics in order to accelerate design exploration to find the optimal solution.

Since the 1950s, the hollow fiber membrane oxygenator (HFMO) has been used to deliver oxygenated blood to, and remove carbon dioxide from, organs to support their vital functions during a cardiopulmonary bypass (CPB).
Basically, HFMOs are composed of thousands of polymeric hollow fiber membranes (usually polypropylene or polymethylpentene based), which are gathered and sealed together to form a fiber bundle. A gaseous air/oxygen mixture flows through the lumen of the hollow fiber membrane, while the outer fiber surface is in contact with the bloodstream. Based on a diffusion gradient of O2 and CO2 between venous blood and the ventilator gas, oxygen enters the blood from the fiber lumen while carbon dioxide travels from the blood to the fiber lumen. An oxygenator can, therefore, assist or replace lung function in critically ill patients by providing complete respiratory support. Thus, HFMOs are essentially artificial lungs that have historically been used to replace lung function for relatively short periods (up to 6 hours) during cardiac surgery procedures.
Nowadays, however, blood oxygenators are also being used for other therapies, such as acute respiratory distress syndrome (ARDS), and chronic obstructive pulmonary disease (COPB), in treatments which may last up to 20-30 days. Blood cells undergo a bio-chemical process called “coagulation” where the red blood cells and platelets aggregate to form a clot when they come into contact with foreign surfaces. Over time, this process diminishes oxygen transfer and increases the pressure drop, ultimately causing the oxygenator to fail. It is, therefore, imperative to reduce the amount of stress exerted on the blood cells. This can be done by optimizing the blood flow pathway and subsequently reducing the foreign surface area to increase the efficiency of gas transfer.

Generally, blood oxygenators for adults have approximately 2m2 of polymer surface with which to achieve full blood saturation for up to 8l/min of blood flow, for a total oxygen gas transfer rate of 400-600ml/min. As a comparison, the lungs have 70m2 of surface and an oxygen transfer rate of 250-400ml/min at the physiological blood flow rate at rest. Blood oxygenators are thus highly efficient because of fluid dynamics: while blood flows in a laminar and orderly manner within the pulmonary capillaries, blood oxygenators induce turbulence, increasing the gas transfer coefficient. Optimizing the local blood pathway is therefore critical to maximize the available gas exchange surface area.
In this sense, computational fluid dynamics (CFD) can be a useful and powerful tool to obtain greater insight into the gas transfer mechanism at microscopic scale and to accelerate the design exploration process to obtain the best solution based on the design inputs.

Considering that a blood oxygenator is composed of thousands of tiny hollow fibers (outer diameter 300-400 μm), it is virtually impossible to simulate the entire fluid domain due to the computational constraints. It is therefore imperative to define a “reduced representative volume” to represent the fiber bundle. Given that coiled oxygenators are composed of sheets of long, overlapping fibers with a relative angle “α” (generally 20°) between each layer that is then wrapped around a plastic core, one can see how the total fluid volume consists of “n” smaller volumes that are identical to each other and periodic (see Fig.1). Assuming that the distribution of the mass flow rate is uniform along the inlet surface, these smaller volumes can be considered as mini oxygenators that contribute in a “parallel/serial manner” to the overall oxygen transfer rate. This means that it is sufficient to study a smaller volume to predict the performance of the full oxygenator.

The current work implements a classic mass transfer model first introduced by Hormes et al [1], for both oxygen and carbon dioxide, to solve the convection-diffusion equations for the species, namely O2 and CO2. Two user defined functions (UDF) were written to consider the diffusion mechanism of oxygen and carbon dioxide. Oxygen is found in blood either dissolved into liquid plasma or bound to hemoglobin contained in red blood cells. Carbon dioxide can be found in various forms, bicarbonate ions being the most common. The diffusion terms must therefore model different transport mechanisms to effectively mimic the physical phenomenon. In order to evaluate whether the model worked properly, it was decided to replicate the study by Kaesler et al [2] and compare the results obtained in terms of oxygen transfer. Kaesler studied a micro-oxygenator composed of 40 rows of stacked fibers. As can be seen from Fig.2, due to the periodicity of the system, a slice of the total fluid volume can be studied after appropriately scaling the mass flow rate with respect to the frontal area ratio.
The solution in terms of oxygen partial pressure will be representative of the total micro-oxygenator. The quasi-2D geometry (see Fig.3) was meshed with polyhedral elements with an adequate set of prismatic layers to resolve the boundary layer. A mesh-sensitivity analysis was performed to assess the proper size of the elements. The final mesh had 1.2 million elements. The inlet was modeled as a velocity inlet. The velocities were calculated from the mass flow rate of the entire device, which are 20, 50 and 90ml/h. The pressure outlet was set to zero-gauge pressure. The periodic faces and walls were set accordingly. Blood was chosen as the working fluid, neglecting its non-Newtonian behavior.

To model the outer walls of the fibers as a source of pure oxygen, a specific value of the transported scalar (UDS) was set in these face zones. Since the ventilation gas flowing into the fiber lumen is pure oxygen at atmospheric pressure, the partial pressure of oxygen is about 1 bar, which is about 750mmHg.
Additionally, in the CAD model, the fibers are modeled as continuous surface cylinders instead of a porous membrane. Fig.4 shows a SEM cross-section of a single fiber, with a magnification window of the external surface. Note the porous sponge-like structure, which creates microchannels for oxygen diffusion. The porosity of such a structure is in the order of 30-40%. This means that oxygen does not flow through the entire surface of the fibers, but only through the pores of the fibers, which represent 30-40% of the gross surface area in contact with the blood, as mentioned earlier. To account for this, a UDF sub-routine was written to randomly assign a scalar value of 40mmHg and 750mmHg to the fiber surface elements. Specifically, 750mmHg was assigned to 40% of the total elements (representative of the pore area) and 40mmHg to the remaining 60%, such that

where p is the porosity of the fiber. Looking at Fig.5, one can see how the subroutine randomly assigns the above values to the fiber wall elements.

The results showed acceptable and satisfactory agreement between the values obtained with the model implemented here and the reference paper by Kaesler et al, in terms of the oxygen partial pressure at the outlet and predicted blood saturation at three different blood flow rates. It should be considered that the model implemented by Kaesler et al represents the state of the art, being the most accurate model available to be used for the study of mass transfer in blood. Looking at the fluid dynamics solution (Fig.6), the velocity streamlines showed a very well organized laminar flow path. The fluid accelerates and decelerates based on the fiber distance, as expected.
Blood enters the fluid domain with an oxygen partial pressure (pO2) of 40mmHg, representing the venous condition. Over time, oxygen flows from the fiber wall and dissolves into the fluid, increasing its partial pressure. Fig.7 shows a stationary solution, where the fluid streamlines are colored relative to the local oxygen partial pressure. The color legend reflects a true physical phenomenon: when the oxygen content increases, the color of the blood becomes bright red.
Looking at the microscale, the blood tends to decelerate when in contact with the surface of the fibers forming the well-known boundary layer. Here the fluid is well oxygenated as can be seen from Fig.8 due to the lower velocities. In the posterior region of the fiber, you can see the presence of a “tail”, underlining the transport of oxygen due to blood velocity.
Oxygen partial pressure at the fluid domain outlet and oxygen saturation were compared between our model and the reference. The results showed acceptable accuracy at the mass flow rate studied. As expected, the partial pressure of the oxygen decreases as the flow rate increases due to the reduction in contact time between the blood and the fiber surface (Fig.9).
It is worth noticing how the difference between the predictions of the two models increases as the partial pressure of the oxygen (and thus the oxygen saturation) decreases (Table.1). This is because, as explained earlier, oxygen transportation is extraordinarily complex and includes more than just the simple physical phenomenon.

In particular, below 100mmHg, diffusion is highly dependent on hemoglobin’s reaction mechanism. The reference model implements a two-phase fluid (plasma and red blood cells) and a more complex and complete reaction mechanism. In contrast, our model considers a simplified space-varying adjusted diffusivity. It is, therefore, clear why the predictability between the two models increases when pO2 is less than 100mmHg.

This study, developed in collaboration with EnginSoft Italy, is the first step towards a CFD-based design approach for the engineering of hollow fiber membrane oxygenators. The microscale approach proposed here aims to provide numerical and specific answers to the mass transfer phenomena occurring in the blood oxygenator.
This study allows us to predict how a different microstructural arrangement affects mass transfer performance, guiding the design phase in a robust and sound manner. Similar to the heat exchanger, the local mass transfer coefficient could be accurately predicted and used for macro-scale calculations without the need for complex, experiment-based analytical calculations.
Future work will lead to a multiscale framework approach that also takes into account how fluid is directed to the fiber bundle, guiding the design of highly efficient blood collectors. This, along with predictions of pressure drop and blood activation, can really accelerate time-to-market, saving time and resources while providing innovative and optimized products to our patients.

Fig.1 – Microarchitecture of the fiber bundle and its periodicity 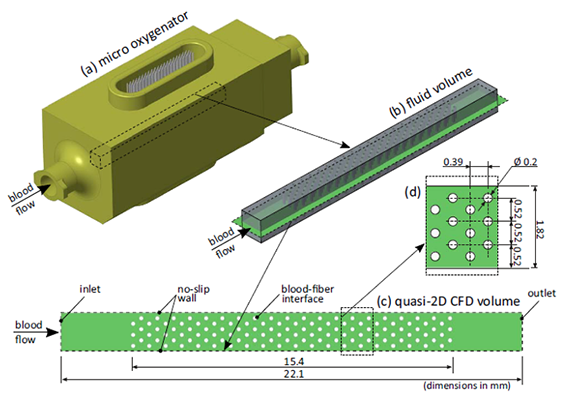 Fig.4 – Cross-section of the fiber lumen 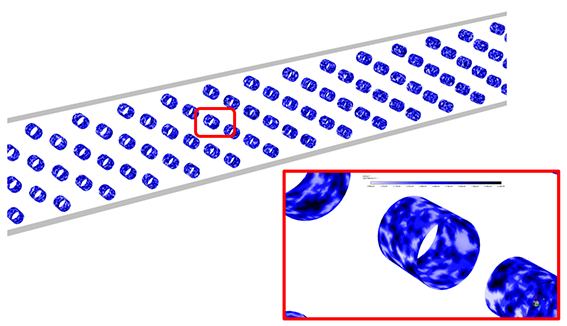 LivaNova is a global medical technology company built on decades of experience and relentless commitment to patients. Our focus is to transform lives with products and therapies for the head and heart through health innovation that really matters. LivaNova has a diverse product portfolio, including therapeutic areas such as cardiopulmonary, advanced circulatory support and neuromodulation. Our mission is to provide hope for patients and their families through innovative medical technologies that deliver life-changing improvements for both the head and heart. LivaNova is present in more than 100 countries worldwide, with nearly 4,000 people across production sites and facilities. For further information, visit: www.livanova.com