Lubrication is critical to the efficiency and longevity of the moving parts of an engine, particularly large internal combustion engines. By definition, a lubrication system is designed to deliver a stable, clean film of oil at the correct temperature and with the correct flow. It must prevent direct contact between the moving parts; reduce friction; reduce wear; cool, seal and clean; absorb shocks, and reduce noise. All of these functions combined contribute to the durability of components and systems, and to the overall operation of the engine. Predicting and simulating the effectiveness of engine lubrication is particularly challenging, both with respect to oil splash in the sump and forced flow in the oil circulation system. With regard to the latter, a computational fluid dynamics (CFD) model of the oil channels must allow for the inertial effect resulting from the complex motion of the engine parts, and must simultaneously be able to simulate the transient nature of the flow at very different spatial scales. In a large combustion engine with a meter-long crankshaft, the flow within the bearings and leakage through small gaps, strongly affect the oil flow and pressure behavior.

In this study, the focus was on the oil supply system for the big-end-bearings of an 18-cylinder engine, which is one of the largest four-stroke gas engines in existence, ideal for base load applications. Wärtsilä and EnginSoft created a moving-particle simulation model, a meshless method of solving Navier-Stokes equations, which allows complex geometries with moving parts to be simulated. The model of the Wärtsilä engine included all relevant moving parts, such as crankshaft, bearings, connecting rod, pistons, and their motion. Modelling and simulating the engine using finite-volume CFD techniques would be impractical due to the geometric complexity of the oil system, and especially due to the motion of the engine parts, which would make it impractical to manage the mesh movement. By simulating the flow through the channels, the moving particle simulation model allowed the transient pressure behavior to be calculated in crucial areas. Comparison of two bearing configurations revealed differences in pressure stability, spikes and low-pressure values that could potentially lead to cavitation problems. The results of the comparative analysis are presented and explained, along with accompanying illustrations.

In this article, the forced lubrication system of an 18-cylinder engine is studied by means of a fluid dynamic model of the lubrication channels. Particular attention is paid to the pressure trend and behavior in the oil channels and in the vicinity of the big-end bearing (BEB). The purpose of the study is to evaluate the effect of a change in the bearing design on the surrounding pressure field.
Due to the nature of the system, a traditional finite volume CFD approach would be unfeasible due to the many moving parts and the complexity of their motion. Therefore, a meshless CFD approach based on the moving particle simulation (MPS) method is used.

The moving particle simulation (MPS) method, originally called moving particle semi-implicit method, was conceived by Prof. Koshizuka of Tokyo University in 1996 [1]. It is a meshless method for resolving fluid motion by solving Navier-Stokes equations in incompressible conditions. It discretizes the fluid domain using particle elements, and each particle becomes a computational node carrying information about position, velocity, temperature, and all variables of interest. Since the core of the computation is the particles, the Navier-Stokes equations are written in a Lagrangian framework, in contrast to traditional mesh-based methods, which use the Eulerian approach. In the Lagrangian approach, particles are tracked and followed during their motion, whereas in the Eulerian approach the viewpoint is fixed to the computational grid (see Fig. 1).

Its meshless nature makes the MPS approach highly flexible and well-suited to applications involving moving parts where mesh generation and deformation using a mesh-based method can be exceedingly difficult. In this work, the Particleworks MPS solver developed by Prometech Software Inc. is used to analyze the oil flow in the engine lubrication system. 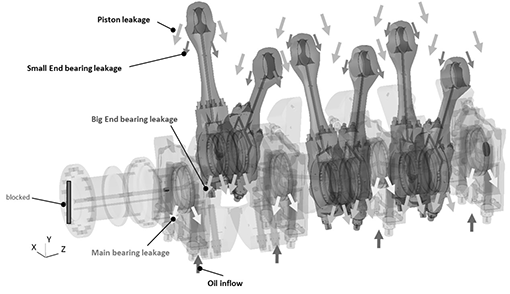 The same simulation method is applied to two different BEB geometries. The crankshaft rotation speed, inlet and outflow rates are kept constant throughout the simulation.
The particle size and the integration time step are the two main parameters that play a key role in the simulation. The particle size must be small enough to address the smallest gap of interest in the geometry. A 2mm particle size is chosen in the MPS model to capture the smallest passages in the channels and grooves. The film of lubricating oil between the bearings and crankshaft pins is not the scope of the current work. Particle size affects solution accuracy and simulation time (smaller particles increase solution accuracy and computation time).
The second key parameter is the integration time step, which must be set to ensure the numerical stability of the simulation. Its value depends on the maximum velocity in the system, and simulation of the two geometries was in the range of 8E-6s. An adaptive time-step is used to allow the solver to adjust according to the solution. An implicit pressure solver is used to improve the accuracy of the pressure field calculation. The simulation was performed on two CPU cores (Intel Xeon Silver 4114) along with an NVIDIA V100 GPU. The benefit of using a graphic processing unit (GPU) is the remarkably high performance-to-cost ratio due to the large number of computing cores in the GPU card. For example, an NVIDIA V100 has 5120 CUDA cores and is capable of 15.7 TFLOPS in single precision, with performance comparable to 48-64 CPU cores.

The goal of the activity is to compare two BEB designs, with attention to the pressure distribution in the oil channels and the pressure behavior in the vicinity of the bearings in question. During the transient simulation, the pressure values in different areas of the channels are monitored, focusing on the two central connecting rods to avoid boundary effects.
An overview view of the oil flow in the full domain shows that the highest pressure values are found in the lower part of the connecting rod (see Fig. 6). Due to the motion of the power system parts, pressure waves generated in the system are periodic and are continuously reflected from the thrust side and the antithrust side of the BEB.
Fig. 7 shows the evolution of the pressure field around the BEB of the central pair of pistons (marked with an asterisk in Fig. 6). The pressure field is smooth and the pressure waves are well captured by the solver. The left corner of the C-shaped channel is reached periodically by a pressure peak (red values in frames 4 and 6), which is followed by low pressure values.
Low-pressure values are predicted near the corners of the C-shaped tube and other areas of the BEB. This may result in an improper lubrication. The predicted pressure trends were confirmed by experimental investigations.
To measure the magnitude of the pressure shocks, ten control regions are defined in the connecting rod channels: three on the thrust side of the connecting rod; three on the anti-thrust side of the connecting rod; one in each corner of the C-shaped tube; and two in the rising pipe of the connecting rod. Fig. 8 highlights the locations of these control regions.
Along with the pressure measurement, quantitative indices are defined to compare the different BEB design configurations. Specifically, the following quantities are monitored: average pressure and standard deviation, peak pressure, time at low pressure, and pressure derivative at peak occurrence. A high average pressure with a low standard deviation is desirable; it means that the flow is uniform and the risk of inadequate lubrication is low. Pressure peaks, time at low pressure, and pressure derivative should be as low as possible to ensure longevity of the engine components.
Fig. 9 shows an example of the pressure signal measured in the control regions described above. These signals reveal spikes, and some control regions have long intervals at extremely low pressure followed by sudden spikes. This behavior can be observed in particular in control regions arc0_L, arc1_L, and elbow_1(L).
A thorough analysis of the previous indices over the entire domain shows that the most critical regions are the lower regions of the bearing (arc0_L, arc0_R), the left middle section (arc1_L), and both corners of the C-shaped channel (Fig. 10).
These regions all feature long periods at low pressure followed by steep spikes with high pressure derivatives.
The locations of the most critical regions suggest a potential improvement in the bearing design. From the simulation data, it is clear that the new bearing design (see Fig. 11b) has two substantial advantages: it reduces pressure spikes and provides pressure continuity on both sides of the bearing.
Comparing the simulation results for the two configurations shows an overall improvement in all quality indices. The oil has a higher average pressure overall and a lower standard deviation; pressure peaks and pressure derivatives are reduced by 20-30%. As a result, the internal channels are more filled and the oil flow is smoother.

Fig. 12 shows the comparison of pressure distribution between the original (a) and improved (b) designs. The new bearing design helps balance the pressure in the system, which is more uniform overall than the original design. Figs. 13 and 14 show the comparison of the pressure spikes and derivative signals measured for the two configurations. The grey lines represent the peak values of the original design, while the black lines refer to the improved design. The blue and orange signal lines refer to the new geometry. Most regions depicted in the images show good improvement (lower pressure peaks and lower pressure derivatives). 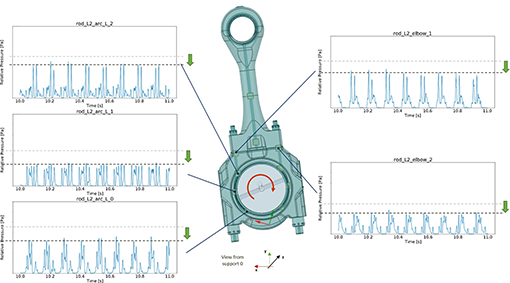 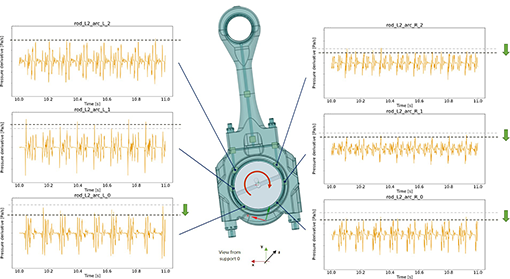 The lubrication system of a large bore engine was analyzed using Particleworks moving particle simulation (MPS) software. MPS is a meshless method of solving the Navier-Stokes equations which easily accommodates complex moving geometries, such as crankshafts, connecting rods, and pistons.
The simulation method was applied to two different big-end bearing geometries. The pressure behavior for both designs was compared in terms of pressure peaks, average values, and minimum values. The first big-end bearing design showed higher pressure peaks, higher pressure derivatives, and longer periods at low pressure. This combination is associated with higher pressure shocks and potentially inadequate lubrication.
The modified big-end bearing design allows pressure waves to propagate between the thrust and anti-thrust sides of the connecting rod, helps reduce spikes and stabilizes overall oil pressure behavior.
The predicted pressure trends and behavior of both designs were confirmed by experimental investigations.

Wärtsilä is a global leader in innovative technologies and lifecycle solutions for the marine and energy markets. We emphasise innovation in sustainable technology and services to help our customers continuously improve their environmental and economic performance. Our dedicated and passionate team of 17,500 professionals in 200 locations in more than 70 countries shape the decarbonisation transformation of our industries across the globe. In 2020 Wärtsilä’s net sales totalled EUR 4.6 billion. Wärtsilä is listed on Nasdaq Helsinki. 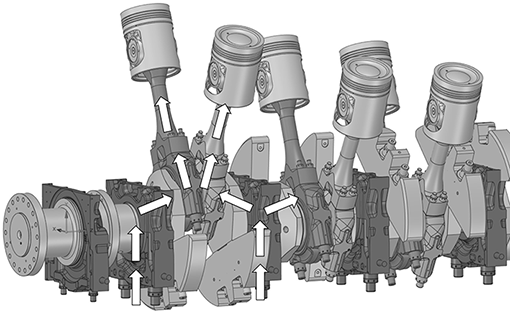 Fig. 2 - Diagram of the engine and oil flow path. 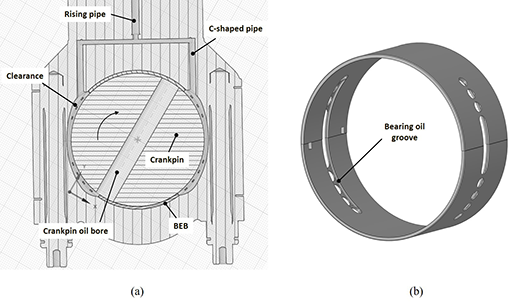 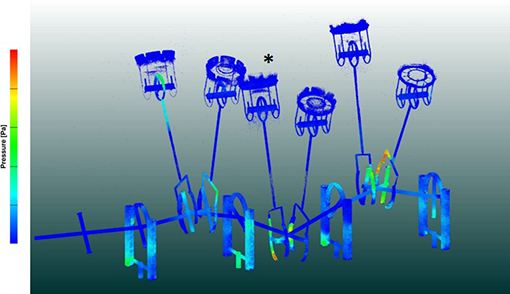 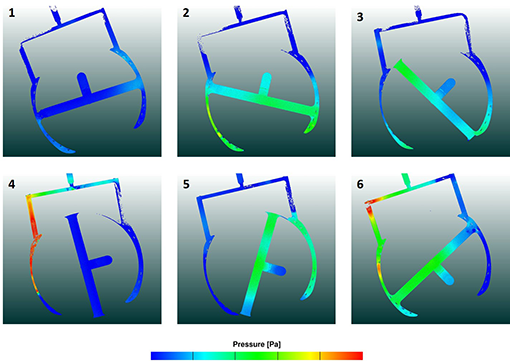 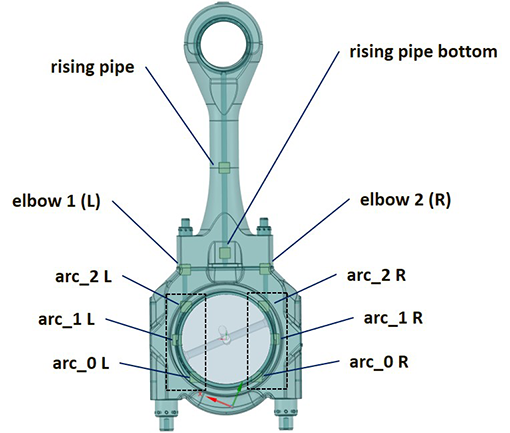 Fig. 8 - Locations of control regions used to monitor pressure within the lubrication channel. 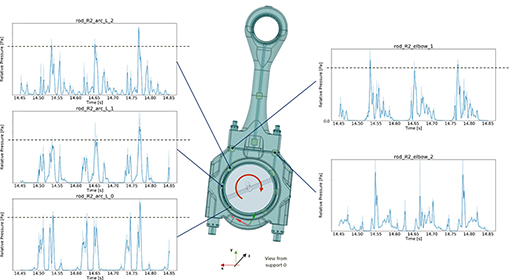 Fig. 9 - Example of pressure signals measured in the control regions. The horizontal dashed line corresponds to the average peak values. 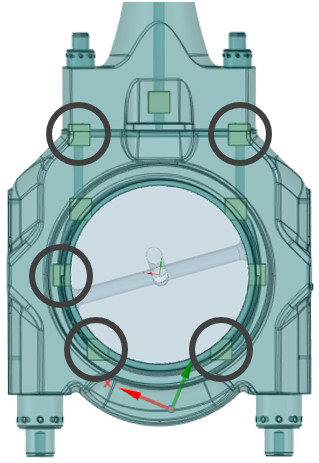 Fig. 10 - The most critical regions in the big-end bearing. 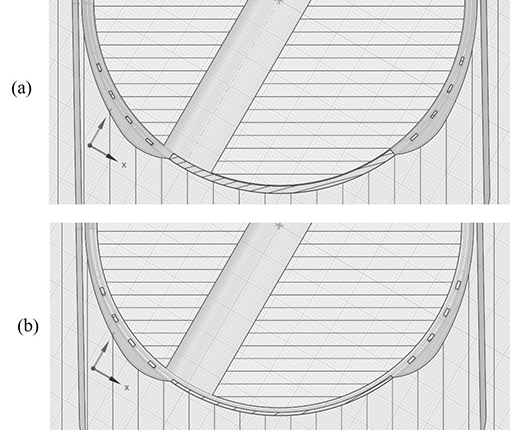 Fig. 11 - Detail of the lower passage joining the two sides of the bearing. Original bearing (a) compared to the improved design (b). 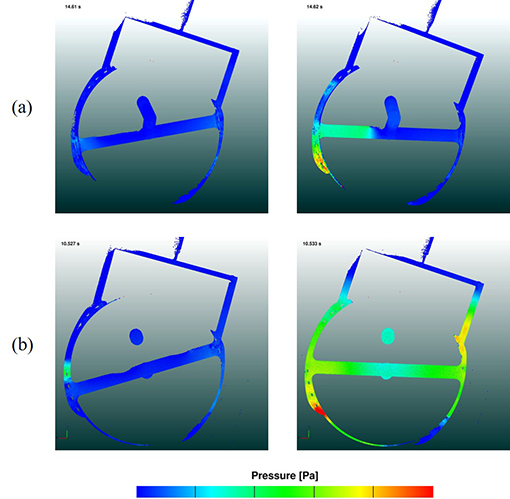 Fig. 12 - Pressure comparison in big-end bearing. Row (a) refers to the original bearing, row (b) to the new design. 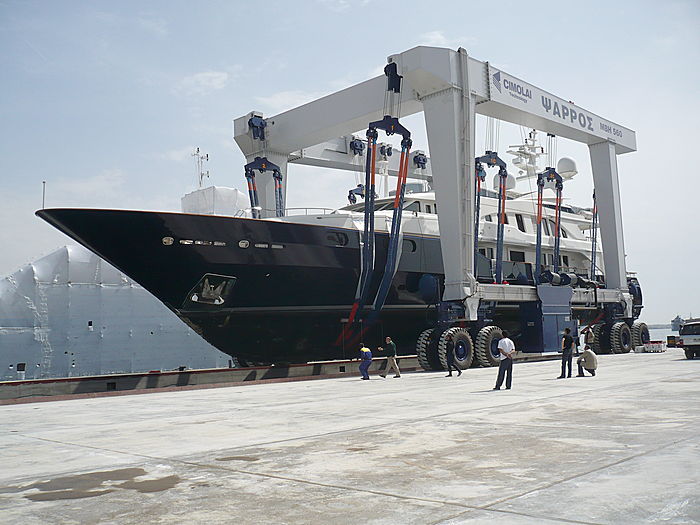 Cimolai Technology explains the business benefits it has achieved since the installation in terms of time savings in planning, and design, and improvements in product quality and in delivery forecast ability.