CFRP composites have been used in Automobili Lamborghini since 1983. Today, the main challenge is to reproduce their structural behavior by developing suitable numerical models whose set-up requires just simple experimental tests.
Automobili Lamborghini and EnginSoft started a collaboration to perfect sophisticated manufacturing applications and FE technical support with the aim to provide such numerical models. While the engineers relied on modeFRONTIER's capabilities, the procedure has been to calibrate the constitutive parameters of LS-DYNA's advanced material models, and to use them for prediction, design optimization and robustness analysis. In this way, the amount of expensive experimental tests could be reduced. This approach also allows better understanding of the influence of physical and geometrical variables on the composite dynamic structural response or, respectively, to obtain improved solutions for industrial case studies. 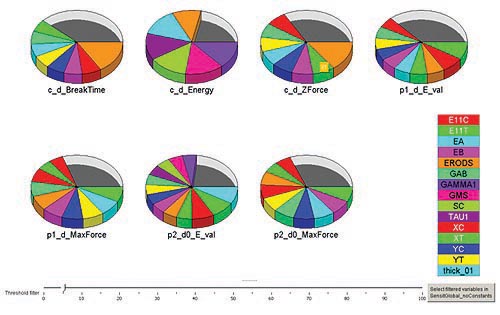 The procedure described in this article allows to define reliable numerical material models for the accurate prediction of the static and dynamic behavior of real components (including those with complex-geometries), without performing dedicated experimental test campaigns. In particular, two different composite materials, “RTM 1400” and “PREPREG 977- 6”, have been investigated with the objective to exploit the calibrated material models in impact situations of automotive structural components. While we describe here only the “RTM 1400” modeling with a “MAT 58” LS-DYNA material card, the procedure has been validated by applying it also to "PREPREG 977- 6", where it delivered similar accurate results of the numerical model.

In order to obtain a good and robust numerical-experimental correlation, the calibration of the parameters has to be performed taking into account the material behavior in different load conditions. For this reason, we use different objective functions, which represent the material responses, and have to be achieved simultaneously. Hence, the calibration process can be tackled as an optimization challenge with material constitutive parameters as input variables to be optimized accordingly to different conflicting goals. To this purpose, LS-DYNA has been coupled with modeFRONTIER, a Process Integration and Design Optimization tool that is capable of exploring the design space (i.e. the free parameters dominions) and finding the configurations which satisfy several objective functions (i.e. the specimen response in different loading conditions). This tool allows also to assess the smaller set of experimental tests needed to achieve a reliable static and dynamic mechanical characterization, by means of its sensitivity analysis capabilities. Furthermore, modeFRONTIER and LS-DYNA can be applied together in the design phase (as well as with other disciplines’ models in the loop), with the aim of optimizing the overall assembly parameters respect to multiple attributes, such as impact behavior, manufacturing cost, weight, size, etc.

2. Setting up the procedure 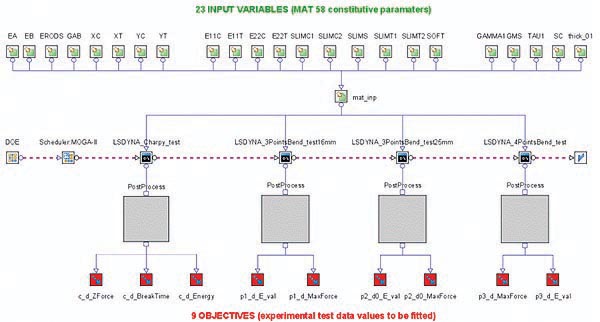 The set-up of the procedure firstly required the selection of a set of simple experimental tests to obtain proper data fitting, and also to integrate the finite element LS-DYNA models into the modeFRONTIER environment.

The experimental tests should describe in an accurate way the different material behaviors under different loading conditions, avoiding at the same time information redundancy. By using the same ASTM D 790 specimen geometry (rectangular cross section bar), the following four destructive tests have been selected and performed:

The Global Stiffness and the Total Absorbed Energy quantities have been measured for 3 and 4-Points Bending tests, while Absorbed Energy and Local Failure Mode were selected for Charpy Pendulum. For these quantities, 9 objective functions to be minimized (nine relative errors) were considered in order to investigate the material behaviors.

As the LS-DYNA material model calibration process is characterized by a large number of goals (i.e. the 9 objective functions) and design parameters (MAT 58 – MAT_LAMINATED_COMPOSITE_FABRIC – selected as the most suitable to describe the composite sandwich which requires 23 input variables), it cannot be solved by using a simple trial-and-error procedure. The efficient method we propose here, instead, takes advantage of the modeFRONTIER Process Integration and Design Optimization capabilities.

The process integration of the numerical models related to the experimental tests can be implemented and described within modeFRONTIER by means of the workflow illustrated in Fig. 2.

From top to bottom, following the blue links, the so-called “Data Flow” can be seen. The green block at the top defines the input variables (the constitutive parameters) for which a suitable range of variations can be set. Each time a new combination of their values is proposed by the modeFRONTIER optimization strategy, the MAT 58 card file is updated (node “mat_inp”) and transferred to the four LS-DYNA models. These computations deliver outputs that are post-processed and finally provide numerical forecasts of the nine physical responses, whose values are re-arranged in the nine relative errors with the aim to minimize the discrepancy (red blocks).

From left to right, following the dotted link, the so-called “Logic Flow” is shown: it represents the sequence of operations that modeFRONTIER will automate, and the logic behind them. The “DOE” node, the first block on the left side, means “Design Of Experiments”. This node allows the user to design a suitable initial population (combinations of input variable values) in respect of an efficient exploration of the design phase. Looking at the performances provided by these configurations, the “Scheduler” node realizes how the investigated phenomenons behave and based on its internal search strategy, starts to generate completely new designs. The new configurations flow sequentially into the four LS-DYNA models, whose numerical simulation is run in batch modality by modeFRONTIER, so that eventually a new evaluation of the objective functions is performed.
In this way, the workflow describes in a graphical and a very intuitive way, how the whole process is carried out. 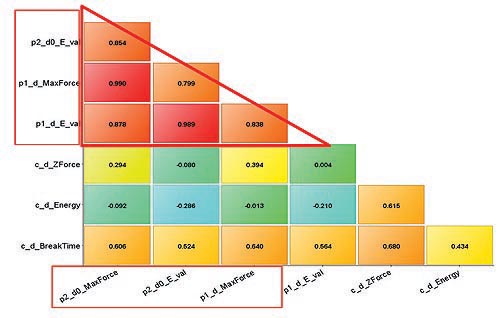 The whole procedure is composed of 3 fundamental steps:
1) Check outputs’ correlations to reduce number of experiments;
2) Check for the least-influential inputs to reduce their number;
3) Calibration and validation procedure.

In the first two steps, a numerical-experimental data comparison is performed in respect of all experimental tests. No optimization (and consequently no calibration) is carried out, as only the designs that belong to the initial DOE are evaluated. By selecting a suitable DOE (full or reduced factorial, latin square, etc.), it is indeed possible to point out both, the correlations between the different objective functions and the correlations between the constitutive parameters as well as the objective functions.

Getting the outputs-outputs relationships (1st step), allows reducing the calibration challenge size because the correlated outputs (i.e. the redundant ones) can be omitted, as well as a whole experimental test. Fig. 3 – objectives’ Correlation Chart – highlights the first-order correlation between two entities by means of a normalized index spanning from –1 to +1: a value equal to +1 (-1) denotes a full direct (inverse) correlation, while a low absolute value means low correlation. In such cases, the outputs of the two 3-Points Bending tests are strongly directly correlated between themselves, hence only a single Point Bending test can be taken into account. Thus the number of objective functions can be reduced (currently from nine to four objectives).

At the same time, highlighting the correlations input-output (2nd step) enables to freeze, at a constant value, the least significant input variables. Thus the number of input variables can be reduced. For this purpose, a Correlation Chart sketching both input and output variables could be used. Another efficient tool is the so-called Overall Student Chart; based on Student’s t-test, it is extremely useful to easily detect simultaneously which input variables are the least sensitive ones for the set of objectives functions.

In particular, as shown in Fig. 4 – Overall Student Chart – every objective function is given by means of a pie chart. In the pie chart, those input variables that affect more than a given threshold are highlighted while the least sensitive ones are grey-shaded and hidden from the table at the right side of the picture after moving the “threshold filter” at the bottom. The input variables reduction (currently from 23 to 15) allows to get a faster model calibration.

In the 3rd step, the modeFRONTIER workflow has been simplified according to the above findings, and the multi-objective optimization campaign started with the Multi-Objective-Optimization-Algorithm MOGA-II. A calibration using only the most sensitive input variables and non-correlated numerical models has been carried out. The optimization strategy provided, in less than 4000 evaluations, three candidate optimal solutions: they are red-framed in Fig. 5 – 4-Dimensional Bubble Chart – where each solution is represented by a bubble in the 4-D plane of the objectives. A good configuration should stay bottom left in the chart (low “c_d_Energy” and “p3_d_MaxForce” deviations from experimental data), should be blue (cold)-colored (low “p3_d_E_val”) and look like a small-sized bubble (low “c_d_BreakTime”). The three selected configurations are good compromises between the simultaneous reduction of the four uncorrelated percentage deviation indexes, selected from the Charpy and 4-Bending Points tests.

The full validation has been eventually assessed by inserting the optimum candidates coming from the previous calibration into the complete workflow: one-digit % deviations from experimental values have been confirmed also by the remaining five objectives.

A material model calibration procedure has been proposed by coupling LS-DYNA and modeFRONTIER. The procedure has been tested for RTM1400 composite modeling with a MAT58 material card, and delivered good results within a two-weeks time frame (once experimental data has been available), on an ordinary workstation. This method also allows to identify the minimum set of experimental tests needed to characterize the material model, out of a set of available ones. In the example presented in this article, these are the Charpy and 4-Points Bending tests.

Is is relatively easy to implement the whole procedure into modeFRONTIER, as the software allows a straightforward process integration and supports the user to build up the more suitable multi-objective optimization strategy. At the same time, the post processing environment is very intuitive to use. 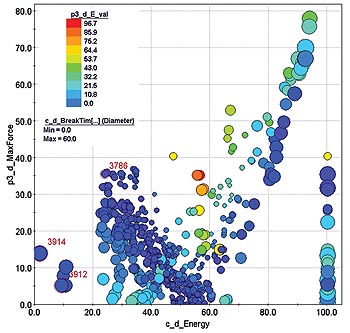 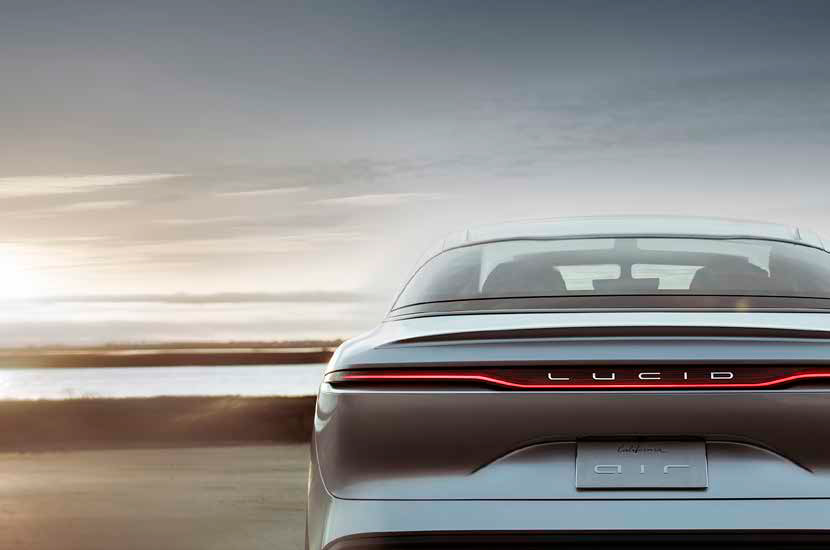