An ambitious remodeling and expansion plan for the stadium was initiated

When the FNM stadium in Johannesburg was selected as the venue for the 2010 FIFA World Cup, an ambitious remodeling and expansion plan for the stadium was initiated.

The remodeled stadium which became known as Soccer City or the “Calabash” was to have its facade clad with a mosaic made of, earth and fire colored, light fiber-cement panels. The cantilever roof structure was to be clad with PTFE membranes matching the sand color of the mines found in the stadium neighborhood. Our study involved the virtual simulation of the roof and facade structures for the construction phase of the project on behalf of Cimolai Spa of Italy, the contractor for both the façade and roof.

The study analyzed these structures for strength, service and stability conditions before construction. 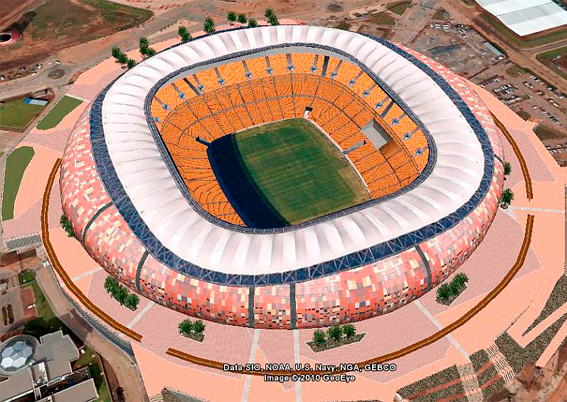 The Object of this Study: the Steel Structure

The overall shape of the structure, doubly symmetric with respect to the N-S & E-W axis, is that of a toroid while the roof closely follows the rectangular shape of the soccer field. The main supporting ring, a spatial ring truss (SRT) and the cantilevered roof structure resulted in a complex double-curvature shape with respect to both height and width. The SRT is a triangular space truss composed of three tubular chords between 710 mm and 910 mm in diameter and from 20 to 40 mm in thickness, connected by tubular members. All tubular members were manufactured by Cimolai, from plane metal sheets, using a 6000 ton hydraulic press. The entire ring is made up of 32 segments, 8 of which have been fully pre-assembled in the shop to check their dimensional accuracy before it was shipped to South Africa. The individual segments were assembled on the ground and lifted with a 600 ton crane and joined together using "turbine" bolted joints.

The roof structure is supported in 28 locations, 12 of which are major supports called Shafts. The SRT is connected to the shafts with 240 mm diameter pins. Sixty beams form the cantilever structure of the roof overlooking the grandstands. They were assembled on the ground and then lifted and put in place using 300 to 600 ton cranes. The facade structure is divided into 120 sectors and is built using HEA 400 and HEB 400 profiles, calendared according to 3 different radii of curvature and transversely connected by RHS members.

A fixed topographical station was installed on site to monitor all erection stages and to check whether the space location of all points were compliant with the construction drawings.

The Part played by Numerical Simulation

Numerical models were built to provide a full structural analysis both for the tender configuration as well as for the final “as built configuration” for the roof and façade of the Johannesburg Soccer City Stadium. The study involved:

The many simulations carried out resulted in the efficient handling of the structural verification process, allowing the final “as built configuration” to be frozen at an early stage of the project, which helped Cimolai to complete this complex roof on schedule and go on to win the South Africa 2009 prize for best steel structure. 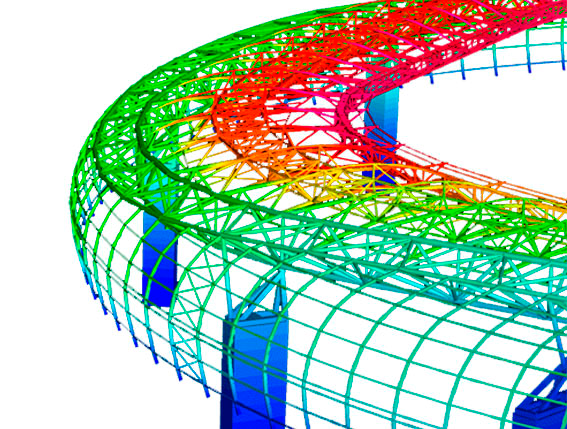 The objective of the study was to create a virtual model of Climaveneta’s new ACU171 Expanded Close Control Unit and then match the numerical results with the experimental measures.