Introducing Skippy: an athletic monopedal robot, designed for a repertoire of behaviors

This article discusses a realistic multi-objective parameter optimization study of a highly athletic one-legged robot, called Skippy, in which both the parameters of the mechanism and the parameters of its optimal behaviors were sought. The result is a Pareto front of robot designs that meet or surpass a set of behavioral performance objectives and, for each design, the set of command signals that accomplish these behaviors.

The aim of the study was to identify a design that could meet all of the objectives, and then to build a real robot based on the optimal design. The study, which was restricted to planar motions (two dimensions), is highly realistic and detailed.

Introducing Skippy: an athletic monopedal robot, designed for a repertoire of behaviors

This article presents a parameter optimization study for the design of a highly athletic monopedal robot, known as Skippy, that is physically capable of performing vertical jumps up to 3m (4m in later prototypes) and triple somersaults of 2m, and which is able to stand and balance on one leg. The robot’s design uses a recently invented transmission mechanism called a ring screw (http://www.royfeatherstone.org/ringscrew/index.html), which is largely responsible for its high performance. The use of the ring screw, an alternative to the widely used ball screw, allows the robot to achieve higher speeds and greater efficiency.

Even though Skippy has no immediate economic purpose, it serves to demonstrate the effectiveness of a more systematic and complete design approach in achieving extreme and unprecedented behaviors. While this case study focuses on a one-legged robot, its findings can be generalized to other types of robots with a properly defined purpose or set of objectives.
The main challenge of this study was that the performance objectives were set very high and the robot already operates near the limit of what is physically possible using today’s technology. The objective of the study was to identify a single design with the highest overall merit from among all the designs that met all of the desired objectives. Achieving such an objective is generally not an easy task because objectives may often conflict with each other. For example, Skippy-like robots that can jump very high are usually not very skillful at balancing, and vice versa. High jumps require a lot of energy, which can be stored and re-used via springs; balancing, on the other hand, needs a stiff body, making these two objectives conflicting. For this reason, we chose a multi-objective optimization approach for our study.
But what is the point of a one-legged hopping robot? By studying a highly simplified monopedal robot, we wanted to gain a deeper understanding of legged locomotion, which we could then extend to multiple legged versions, and use the mobility offered by legged locomotion by taking advantage of the symmetry that characterizes it (think of a human’s legs while running).
The framework of our study consists of a two-layer optimization scheme. In the first layer, an optimization algorithm searches the design space for the most athletic design. In the second layer, each design is tested for its ability to meet each of the behavior objectives. Each behavior objective is treated as a separate optimization problem. We define the term ‘behavior’ to describe what the robot does and the term ‘performance objective’ to describe the outcome of this behavior. An example of a performance objective, therefore, is for Skippy to landing after a 2m vertical jump and then launch itself back into the air to perform a 2m triple backward somersault. The conditions at the moment of landing, plus each of the robot’s actions until the moment it lifts off from the ground, describe a complete behavior. A score that reflects how close each behavior is to the performance objective is then awarded for each behavior. This is an example of machine and behavior co-optimization.

The model and simulation

To achieve high performance, highly detailed and realistic models of the mechanism, its limits and inefficiencies are required. For example, the motor is subject to speed, torque and thermal limits, and there are energy losses in the motor, transmission, and springs, as well as when the robot’s foot hits the ground.
Robot Skippy’s mechanism was modeled with 56 parameters (the detailed listing of the parameters has been omitted due to its large size). The schematic diagram is presented in Fig. 1.
The robot has three joints: the ankle, the foot and the hip. The ankle is a passive joint (it is not directly controlled) and has a spring attached to it. A second spring is attached in series with the ring screw nut, which is also connected to the main motor of the robot. This motor effectively controls the hip via a 4-bar linkage; both springs are custom made from glass fiber. Finally, Skippy has a crossbar (controlled by a second motor), which will be used to achieve 3D balance and steering, which are not relevant to this study.
We decided that some parameters would be fixed while others were the result of separate optimization studies (such as the 4-bar linkage). For the study presented in this article, we optimized seven parameters: six of these define the profiles of the two springs while the seventh defines the position of the center of mass of the upper link, which has a significant impact on the robot’s performance.
Finally, we developed a simulation environment in which the mechanism’s performance for each of the desired performance objectives was tested. A behavior was defined with 26 parameters of which 13 were independent variables representing the voltage profile fed to the robot’s motor. Fig. 2 shows an example of a voltage profile. The simulation was performed with MATLAB and Simulink. 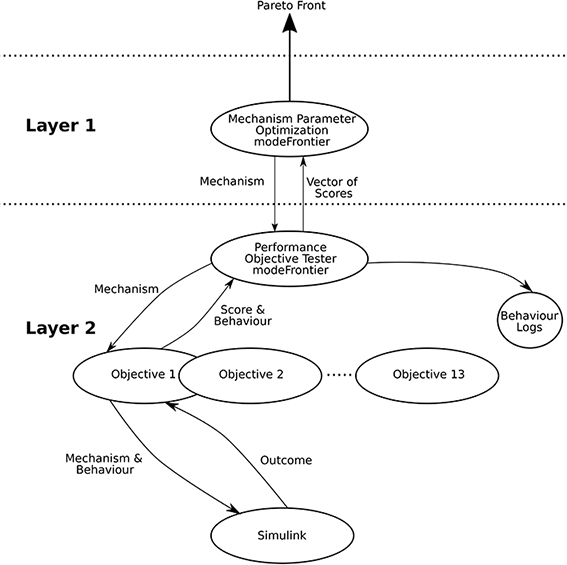 Fig. 3 illustrates the overall organization of the process has been arranged into modeFRONTIER, platform for process automation, optimization and data mining, which, as mentioned previously, is organized in two layers. The upper layer finds a Pareto front of optimal designs that meet all of the objectives. The MOGAII algorithm was used because it allows multiple objectives and because it is not limited to local exploration, such as gradientbased algorithms. The latter was important because we were managing a high dimensional non-linear search space. The lower layer consists of 12 individual optimization experiments to find a given mechanism’s best performance for each performance objective, and a calculation to determine that mechanism’s balancing ability, which we wanted to maximize. To summarize, these performance objectives were to:

MOGA-II was also selected for this stage, with some of the performance objectives being formulated as multi-objective optimization problems.
Finally, the algorithms were subject to 11 constraints to ensure the realism and feasibility of the simulations. To name just a few, these were to: avoid penetrating the ground, avoid selfcollision, limit the applied current and more. An overview of the algorithms, which were used in their default configurations, and their parameters is presented in the following table (Table 1).

The Incremental Space Filler technique and a user-defined initial seed were used to explore the search space. The initial seed is a mechanism which can nearly perform the desired objectives and their corresponding behaviors (it was identified via a separate optimization study using the same framework).

The optimization scheme evaluated 260 designs, of which 46 (~ 18%) passed all the physical performance tests. A design was considered to be a successful candidate when at least one valid behavior per objective was discovered, allowing for a small interval of error.
We discovered mechanisms that were very skillful in one or in some of the objectives, but that performed poorly in others. The mechanism that could jump the highest under-performed in the traveling hops, while the mechanism that excelled in somersaults had difficulties in performing low hops. A new, more extensive experiment, to be conducted in future, will seek a deeper understanding of the physical traits that lead to this natural inclination for specific behaviors.
In this study, our main objective was to identify a single machine with the highest overall merit: a machine that displays high athleticism in all of the performance objectives, is a capable balancer, and expends the least amount of energy while performing these behaviors (this was an extra selection criterion that was not considered for the optimization). By examining the Pareto front solutions, we identified a design that satisfied all of the above criteria and this is currently being manufactured to test the effectiveness of our method.
Fig. 4 presents an sample behavior of our selected design and shows the stacked energy flows during one of the most demanding behaviors (the stance phase of a 2m triple backward somersault). The potential and kinetic energies can be seen as well as energy losses due to friction in the springs, the motor and the ring screw. In Fig. 2, we presented the voltage and current profile of the same stance phase of a 2m triple backward somersault. Notice that the motor is in saturation (at 31 Volts) for a large part of the stance phase, proving that the mechanism is indeed being driven to its limits.

This study has demonstrated an optimization method for the design of a robot that meets several highly athletic behavior objectives.


The study focused on the design of a highly athletic mono pod that can perform jumps of increasing height up to 3m, then jumps of decreasing height, traveling hops, display a high physical ability to balance and was selected based on an energy efficiency criterion. The framework evaluated 260 different designs of which a single design was selected to be built.

The study was performed in one plane, but is highly realistic and uses very detailed models and simulations that capture all the important energy flows. Despite the focus on detail, there are limitations to our work. We did not simulate our designs on uneven surfaces and we assumed a constant friction coefficient with the ground. We plan on investigating these issues, as well as on varying and introducing additional parameters to our model.

The Istituto Italiano di Tecnologia (IIT), based in Genoa, Italy is a foundation financed by the State to conduct scientific research in the public interest, for the purpose of technological development. The IIT aims to promote excellence in basic and applied research and to promote the development of the national economy. As at December 2019, the IIT had produced more than 13000 publications, participated in over 200 European projects and more than 40 European Research Council (ERC) projects, made more than 900 active patent applications, created 22 established start-ups and has more than 40 more under due diligence. It has a network of 4 hubs in Genoa that form its Central Research Laboratories, a further 11 research centres around Italy, and two outstations located in the US at MIT and Harvard. 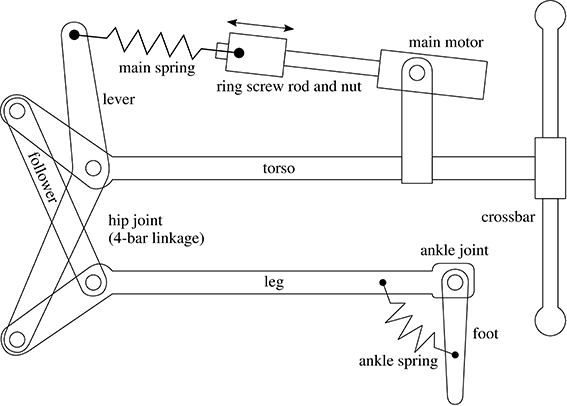 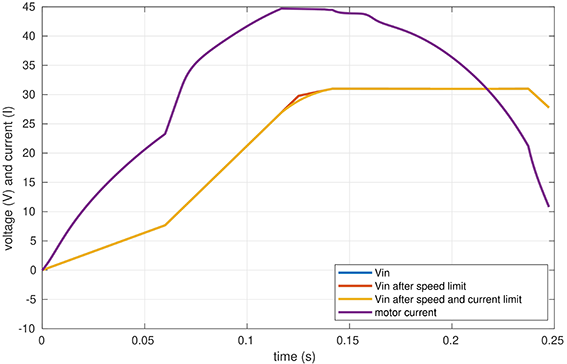 Fig. 2 - Voltage and current profile during a 0.247 second stance phase that results in a 2m triple backward somersault 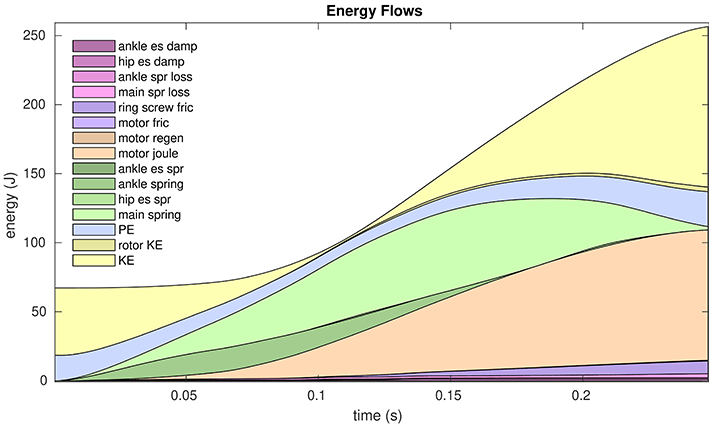 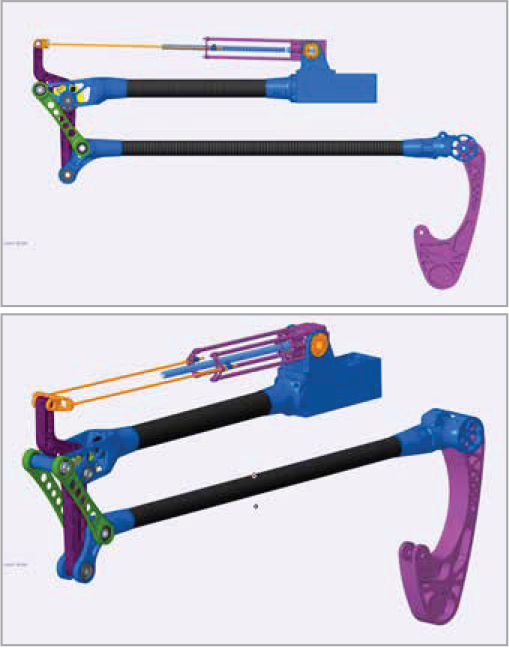 This paper presents the main steps taken in the development phase of the IVECO cab suspension brackets to comply with the new ECE R29 crash regulation for Heavy Commercial Vehicles (HVC).