This technical article describes a project undertaken by OPEM to optimize and validate the laws of motion governing the moving operations of a machine that produces coffee capsules, namely the cut and weld unit, the film feeder, the conveyor and the support structure.

Capacity is the most important feature of an automatic packaging machine since it defines its main competitive advantage. As a result, OPEM’s designers are constantly looking for new solutions to increase the capacity of their machines without compromising costs, size and efficiency.

The main objective of this project was to increase the machine’s capacity by 25% without affecting the architecture and size of the machine. Using an iterative approach, EnginSoft’s engineers generated multibody models developed in RecurDyn, to assist OPEM’s designers to reduce the cycle time for performing the moving operations by well over 25%.
The RecurDyn models were also used to correctly size the main components of the machine, to verify the machine’s dynamic behavior when subjected to the new laws of motion implemented, and to calculate the loads acting on the frame, which were subsequently used for structural verifications.

Capacity is the most important feature of an automatic packaging machine since it defines its main competitive advantage. OPEM’s designers are constantly looking for new solutions to increase the capacity of their machines without compromising costs, size and efficiency.

This project focused on a machine for the production of coffee capsules. The main objective was to increase capacity by 25% without affecting the architecture and size of the machine. The machine’s operations can be divided in two main areas: 1) Stationary operations; 2) Moving operations.

To achieve the desired objective OPEM partnered with EnginSoft to optimize the laws of motion governing different mechanisms. The optimization process was supported by multibody simulations performed in RecurDyn to verify the dynamic behavior of systems subject to these new and highly demanding laws of motion.

The mechanisms analyzed can be divided into four units: 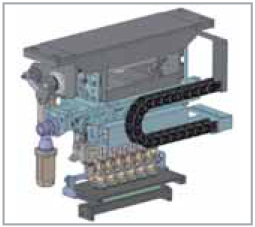 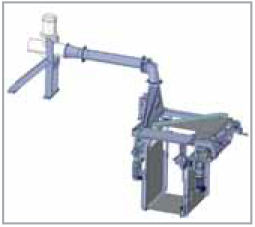 The cut and weld unit (Fig. 1) cuts the film into circular portions and transports and seals them on top of the capsules. To perform these operations, the components of the unit are moved by two electric motors. The motion applied by the electric motors is transferred through a series of four-bar linkage mechanisms and crank mechanisms, which determine a nonlinear relationship between the movement of the motor and the motion of the end effector.
The film feeder (Fig. 2) supplies the film to be cut and sealed. The movement of the film is controlled by several electric motors to apply the correct tension and to align the film correctly. When performing the cutting operation, the nesting of the holes is very important to reduce the amount of scrap material. OPEM’s designers included a crank mechanism which translates the entire film feeder unit resulting in better nesting of the holes and thus reducing scrap material (Fig. 3). The current study focused on this lateral movement of the unit since the advancement of the film is already well-known to the OPEM designers and therefore no further study was requested on this topic.
The conveyor (Fig. 4) moves the capsules. The empty capsules are automatically loaded at one end of the machine. At the beginning of each cycle the capsules are moved one step forward until they reach the other end of the machine where they are unloaded. The capsule supports are fixed to two chain mechanisms consisting of several hundred chain links, supporting guides and four sprockets. An electric motor is directly connected to two of the four sprockets and rotates them at the beginning of each cycle to advance the chain mechanism.
The last unit analyzed was the structure (Fig. 5). Built mainly of beams, it supports all the other units.

Fig. 3 - Examples of nesting. The solution on the right, obtained by laterally translating the film, clearly reduces the scrap material. 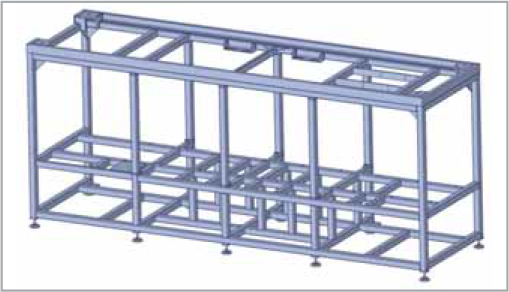 Optimization of the laws of motion

The core activity of this project was to optimize and validate the laws of motion governing the cut and weld unit, the film feeder and the conveyor. This was done using an iterative approach: 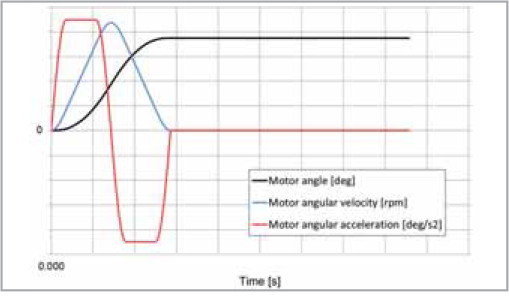 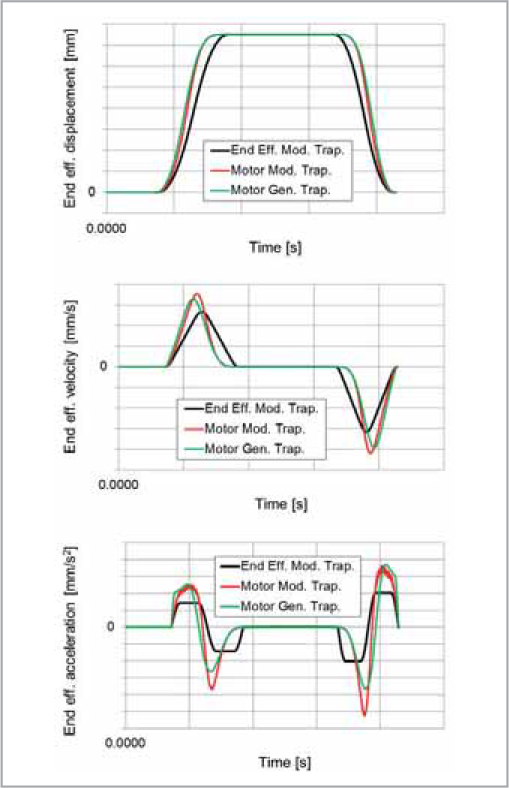 Fig. 7 - Position, speed and acceleration of the cut and weld unit end effector.

The optimization process of the laws of motion described in the previous paragraph was assisted by the results of the multibody models developed in RecurDyn.
The cut and weld unit was initially represented using a multibody model made of rigid bodies only. This model was suitable for use during the optimization process because the time required for the calculation was less than 20 seconds. This model was then used to optimize the laws of motion for the two electric motors, and also to verify their synchronization. (The synchronization of the motors is very important to perform a precise cut of the film and to avoid collision with the other components). Once the optimization process was complete, several components of the cut and weld unit were transformed from rigid to flexible bodies (Fig. 8). The simulation was repeated to calculate the stress acting on the components under dynamic conditions. No structural problems were found demonstrating that the optimization of the laws of motion was able to increase the performance of the machine as required, minimizing the variation of internal loads. At the same time, this result proved the robustness of the machines designed by OPEM.
The model for the film feeder was not developed starting from rigid bodies alone: the flexibility of the film was taken into account from the outset to ensure that the modification of the law of motion did not affect its dynamics and final position. The film was modelled using RecurDyn’s proprietary Full Flex approach to correctly represent the film’s large displacements during lateral movement. (Full Flex technology transfers the full stiffness matrix of an object to the RecurDyn solver, i.e. all the degrees of freedom (d.o.f) of the flexible bodies are taken into account during the solution, which allows the correct representation of nonlinearities such as: large deflections, nonlinear materials and contacts over flexible surfaces). Once the optimization process was completed, the side plates of the unit were transformed from rigid to flexible (Fig. 9) to calculate both the stress acting on these components, and to assess whether their flexibility could cause unwanted lateral oscillations of the film at the end of the movement.
Once again, the optimization process led to a law of motion able to meet the requirements without introducing structural problems. In addition, the interaction between EnginSoft and OPEM’s engineers highlighted some areas where the weight of the unit could be further reduced to achieve even better performance in the future.
The multibody model developed to study the conveyor included more than 300 contact points since all the chain links are supported without the use of joints. Their interaction with the sprockets and guides relies only on the contacts. This model was used to calculate the motor torque, to simulate the chain dynamics and to calculate the chain tension resulting from the preload and the conveyor’s movement.
The loads obtained from the multibody models were subsequently used for the structural verification of the frame. A finite element model was constructed using ANSYS Workbench to calculate both the deformation and the stress acting on the structure (Fig. 10 and Fig. 11). 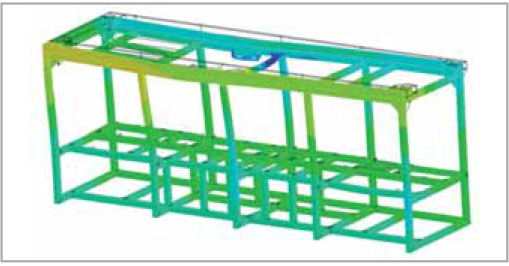 This study successfully improved the capacity of a capsule machine by 25% by optimizing the laws of motion governing the mechanisms that compose it.
The optimization process was based on an iterative approach supported by multibody models developed in RecurDyn. These models were also used to correctly size the main components of the machine, to verify its dynamic behavior when subjected to the new laws of motion and to obtain the loads acting on the frame, which were subsequently used for structural verifications. 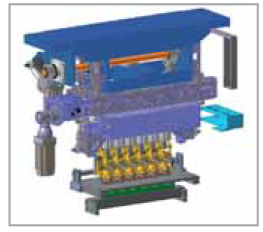 Fig. 8 - Overview of the RecurDyn model of the cut and weld unit including flexible bodies 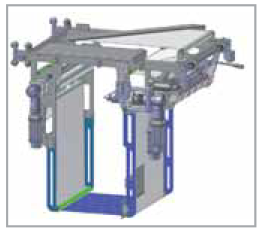 Fig. 9 - Overview of the RecurDyn model of the film feeder including flexible bodies

OPEM S.P.A was founded by Fabio Binacchi in 1974 in Parma as a small, family-run company which started with the purchase of a pasta business that laid the foundations of the future OPEM. In the beginning, the company had ten employees and the coffee market was still on the distant horizon, but continuing requests for new weighing and packaging machines led the company to study and design systems that could be used in different sectors. Binacchi started working for third parties and became interested in packaging not only for pasta and biscuits (which were never completely abandoned), but also for coffee. In the Eighties, OPEM worked with important customers such as Barilla and Kimbo and, over the years, it expanded its horizons abroad, working with many international customers. The rise of the rapidly booming market for pods and capsules gave the company the opportunity to grow and expand, thanks to their foresight in producing very flexible systems that can be customized to meet many customers’ requests. In 1984, the company moved to Parma’s industrial area and employed 105 workers. Thirty years later, after more than three years of construction, the new OPEM plant was inaugurated in Parma’s industrial area in September 2014, proudly affirming the confidence in the company’s know-how and its commitment to the future.

Packaging companies are always striving to stay one step ahead of their competitors in providing the best solutions for product capacity.