The Arvedi Group approached the University of Trieste to find a solution to the uneven distribution of material inside the hopper of their blast furnace in Trieste, Italy.
The university’s Mechanical Engineering Department studied the problem and used modeFRONTIER to optimize the design of a new deflector ensuring better material distribution.
Leveraging ESTECO’s integration and process automation technology, they coupled modeFRONTIER with Rocky DEM software to accelerate the simulation process of the material distribution. Using the proprietary algorithms available in modeFRONTIER, they were also able to find the optimal design for a new deflector.

The project concerned the process of loading coking coal and iron ore into the hopper. These different materials had formed piles and pitches, leading to a reduced efficiency of the plant. The uneven distribution of the material inside the hopper caused variations in the temperature profile, gas flow, and gas composition.
To solve this problem, modeFRONTIER was coupled with Rocky DEM to better understand the behavior of the materials and to optimize the design of the deflector. The modeFRONTIER integration also made it possible to meet the time constraints by reducing the computational time for each simulation. 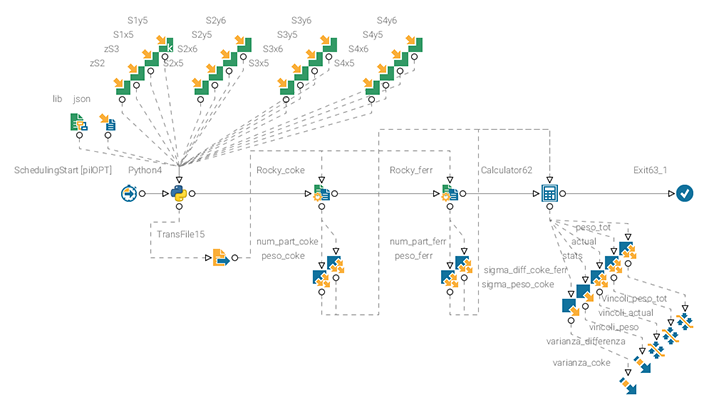 Fig. 1 - The workflow set up in modeFRONTIER to automate the simulation process in Rocky DEM and run the design optimization strategies.

This project was developed in two phases. The first phase concerned the calibration of the Rocky DEM parameters and the simulation of the loading of the hopper. The second phase consisted of optimizing the geometry of a new deflector for the loading process.
The discrete element method (DEM) parameters, such as static particle-particle friction and rolling resistance, were used as inputs to modeFRONTIER for the calibration process. The simulated material’s angle of repose was used as an output.
For the optimization of the equipment, a Uniform Latin Hypercube sensitivity analysis ran 90 designs and identified the most important design variables. The engineers then optimized three different geometries, using these geometric variables as inputs. The outputs were based on the distribution of the material, which was calculated by virtually dividing the hopper into 12 sectors and performing a statistical analysis of the particles found in each one. These values were then used to define the two objectives and the optimization constraints.
The department used ESTECO’s proprietary pilOPT algorithm to run the three optimization studies. By using the autonomous mode, they were able to evaluate more than 1,000 designs in just a few weeks, without having to set any parameters and with considerable time advantages.

With its user-friendly graphical user interface, modeFRONTIER helped automate the simulation process. Without modeFRONTIER, engineers would have had to manually modify the geometry of the deflector for each simulation, wasting a significant amount of time. With modeFRONTIER they were able to save up to 130 hours of computation time. Lastly, by automating the process, the design engineers could launch the optimization and avoid the painstaking process of manually combining the output from multiple applications.

Founded in 1963, the Arvedi Group is one of Europe’s most significant steelmaking realities, operating in the production of hot-rolled pickled, galvanized and pre-painted coils, carbon and stainless steel tubes and stainless steel precision-rolled strip.

This technical article illustrates the advantages of using virtual simulation to evaluate the thermal processes of die casting to reduce the formation of residual stresses and deformations in the components produced.