A light-hearted coronavirus lockdown project with a useful outcome

This light-hearted technical article discusses a project undertaken between WolfStar Technologies’ Tim Hunter and Endurica’s Will Mars during the Coronavirus lockdown – to create a digital twin of a Pogo Stick in order to calculate its fatigue damage in the hands of a novice user. The Pogo Stick was turned into a load transducer using finite element analysis (FEA) so that the strain gauge locations could be identified, and the strain data collected, to create the operating deflection shapes of the toy.

These were then fed into Endurica to subsequently calculate the fatigue damage on the rubber – with all load and damage calculations processed in real time.

What happens when two engineers are quarantined for three months? Well, one of them (me, Tim Hunter) decides to buy and learn how to use a Pogo Stick. The other one (Will Mars) wants to know how long the Pogo Stick will last under my less-thanproficient usage. So we connected and embarked on this lighthearted quarantine project: we turned the Pogo Stick into a load transducer and drove the Pogo Stick loads into the rubber to calculate its fatigue damage. Sure, other engineers out there were doing great things developing 3D printed masks, respirators, or contact tracking apps – we had to solve the Pogo Stick problem! In this article, we will describe how we turned the Pogo Stick into its own load transducer with True-Load by leveraging the finite element analysis (FEA) model. True-Load identified the strain gauge locations on the Pogo Stick. The strain data was collected by me while using the Pogo Stick. We then transformed these strains into loading time histories, which were used to create the operating deflection shapes of the Pogo Stick. I passed these deflection shapes on to Will Mars at Endurica, whose software then simulated the complete nonlinear time histories of the rubber’s response to these loads. Subsequently, Endurica calculated the fatigue damage on the rubber. The processes involved were mathematically efficient and fast enough to process the load and damage calculations in real time.

Details of the project

At the macro level, the process for calculating the durability of the rubber component with Endurica began with load measurement. Due to the complex structure of the Pogo Stick, we used the in-situ technique of measuring the loads using True-Load. See the diagram below for the schematic of this process. The first step was to apply the unit load cases to an FEA model. Once the response to these unit loads had been calculated, the True-Load software identified the locations in which to place the strain gauges. The strain gauge placement guaranteed that the loading from measured strains could be calculated backwards. Once the strain gauge locations had been identified, the physical structure was then fitted with these strain gauges. We then collected the strain data while using the Pogo Stick. The measured strains were subsequently used to calculate the loads on the structure using the True-Load software. Once the loads had been calculated, they were passed over to the Endurica software for the durability analysis.
Endurica EIE uses a set of pre-computed finite element solutions to rapidly generate the corresponding strain histories for each finite element in a model of the rubber tip. These strain histories were then fed to the Endurica DT incremental fatigue solver to compute the damage accrued in each element in the rubber tip. Damage accrual is tracked in two ways: firstly through the effect on crack growth; and secondly through the effect on the computed residual life.
After processing each new set of loads, the software presented the results on a dashboard that allowed us to track the remaining fatigue life in the rubber tip. This process is repeated each time a new set of load measurements becomes available. 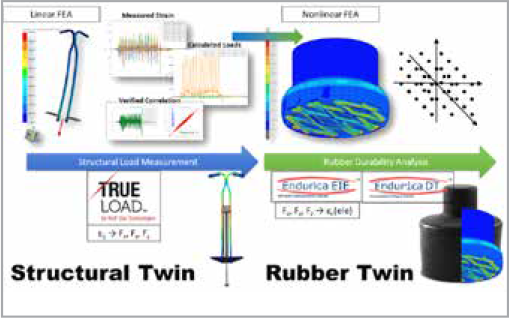 Below we summarize the steps involved in recovering the dynamic loads acting on a component fitted with a finite number of strain gauges to measure the time-varying strains. The flow chart below shows the major steps of the load reconstruction process.
This process recovered the loading on the Pogo Stick. The Flybar™ Super Pogo Stick was purchased from Amazon. The 3D model of the Pogo Stick was reverse engineered. Wolf Star Technologies’ Senior Application Engineer, Cynde Murphy, performed the instrumentation work. Data was collected for normal operation of the Pogo Stick on a variety of surfaces. The figure below shows a typical trace of the strain data gathered.
Once the strain data was collected, it was processed to reconstruct the applied loading to the system. This is achieved by multiplying the measured strain data by the correlation matrix that was extracted from the FEA model. This generates a time history of loading scale factors for each of the loads applied to the Pogo Stick.
The True-Load/Post-Test software was used to perform this load reconstruction. Several other automatic post processing tasks were also performed. This produced an HTML report that contained the plots of the reconstructed loads and a set of plots showing the measured strain and simulated strain from the reconstructed loads at the strain gauge locations in the FEA model. These measured/ simulated strain plots have been summarized in an overall plot with the simulated strain shown in blue and the measured strain shown in green. The software also generates a cross plot of the simulated vs. the measured strain, which, ideally, would be a perfectly straight line at a 45-degree angle. 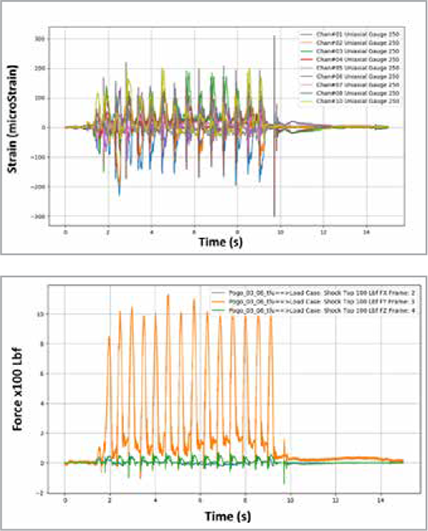 Because of rubber’s nonlinear behavior, the linear superposition of unit load cases is not a valid method for converting load history into strain history. Nor is it an option to run a full FEA of the load history at each update, given that typical model run-time is approximately one hour for only a few seconds of real-time loading history. Instead, we used the Endurica EIE interpolation engine. Endurica EIE uses a pre-computed, nonlinear map that connects possible loading states of the rubber tip, as specified by the x, y, and z force components acting on the tip, to the corresponding strain states that occur in each element of the FE model. EIE leverages the assumption that there is a unique, one-to-one correspondence between points in the 3-channel loading space and the deformation states of the material. Since rubber is nonlinearly elastic, this assumption is generally accurate.
Once the strain history for the surface elements of the rubber tip was known, the next step was to accrue the associated damage. This was accomplished using the Endurica DT incremental fatigue solver. The incremental solver is based on the following calculation (Mars et al 2018), and is made for each possible failure plane in each element. This formulation uses the same crack growth rate laws and input variables as are used to initialize the residual life, but integrates over cycles from time Ni to time Ni+1, rather than over crack size.
The result of the integration is the change of length ΔCi->i+1,j,k of a crack for each finite element j and each potential failure plane k of the model.

The accumulated crack lengths for each element are written to a file during the analysis, so that future additions of load history may begin at the point at which the prior increment left off.

Putting it all together

We developed a custom dashboard to display the current state of the Pogo Stick’s digital twin. The application manages the initialization and update processes describe above, and then plots the results following each update. The most recent value of the residual life is displayed at the top of the screen, with the change in residual life from the most recent update noted in parentheses. In the upper right-hand side of the screen, there are indicator lights for each step of the update process, which are provided to demonstrate the relative computational load of each step. Two plots are provided on the left side of the screen. The topmost plot is the load history from all three channels for the most recent update. The bottommost plot is the history of the residual life over all prior updates. A contour plot is provided in the bottom right corner of the screen displaying either the residual life distribution (default) or the change in the distribution of crack length (if the checkbox is checked). New updates to the digital twin can be processed by clicking the “Update” button and selecting a new input file with loads from the latest round of Pogo Stick jumps.

This project provided an outlet for our pent-up creativity during lockdown, and allowed us to demonstrate how to leverage bestin- class load reconstruction with one-of-a-kind rubber durability to create a durability dashboard for our Pogo Stick that updates the damage calculations in real time.
Please feel free to contact us: we would be happy to help you with your product loading and durability issues. 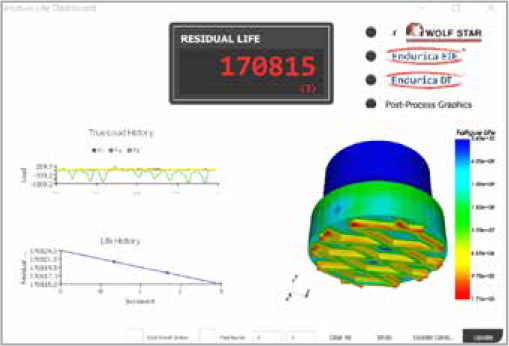 One of the most challenging tasks for an analyst is to develop load cases for their FEA model that match measured strain values.

A light-hearted coronavirus lockdown project with a useful outcome

This light-hearted technical article discusses a project undertaken between WolfStar Technologies’ Tim Hunter and Endurica’s Will Mars during the Coronavirus lockdown – to create a digital twin of a Pogo Stick in order to calculate its fatigue damage in the hands of a novice user.