The Bloodhound project, conceptualized in 2008 by Richard Noble and Andy Green (past and present holders of the land speed record), targeted the setting of a new land speed record of 1000 mph with the Bloodhound Super Sonic Car (SSC) on an 18 km-long stretch of the Hakskeen salt pan in the Northern Cape of South Africa.

The South African University of the Witwatersrand in Johannesburg set some of its students a final-year Mechanical Engineering project to design a system to film the Bloodhound land speed record attempt at a distance of 50 m without interfering with the vehicle in any way.

The Bloodhound project was conceptualized in 2008 by Richard Noble and Andy Green, past and present holders of the land speed record. The project aims to set the new land speed record of 1000mph, with the Bloodhound Super Sonic Car (SSC), Figure 1. The record attempt is set to take place on an 18 km long stretch of the Hakskeen salt pan in the Northern Cape, South Africa. An inspiration to the next generation of scientists and engineers, the project aims to promote interest in Science, Technology, Engineering and Maths (STEM) subjects among school learners and to stimulate cutting edge research. The Hakskeen track, chosen for its length, uniformity and favourable weather conditions, is an exciting chapter for South Africa, promoting tourism and even creating many jobs in the preparation of the track.

The Bloodhound is powered by a Eurojet EJ200 jet engine and a Nammo rocket cluster, producing a maximum combined thrust of 210 kN, and is projected to accelerate from 0 to just over 1000 mph in under a minute, Figure 1.

A supersonic aircraft drone prototype, Figure 2, was designed based on accepted aircraft design estimates for drag, stability and stall, before any Computational Fluid Dynamics CFD and wind tunnel testing.

Aircraft design commonly relies on analytical and empirical estimates to produce prototype designs. Given the complex dynamics of aircraft performance, these prototypes must always be tested and developed numerically (CFD) and physically (wind- tunnel data). It is crucial that prototype solutions be optimal, according to all design estimates, to reduce iteration at the testing stage, which is often costly and time consuming. Thus, the design process was focused on optimizing available design estimates to produce an effective prototype.

Considering existing drones designed for supersonic flight, such as military target drones, the aircraft geometry was parameterized to include a wide range of reasonable solutions. A set of independent input parameters were selected, usually dimensionless ratios, and corresponding ranges were defined for optimization. This parameterization is illustrated in Figure 3.

Drag estimates for the wing, fuselage and tail were combined to estimate the total drag over the operating range (M<1.29≈1000mph). The required thrust was estimated as the sum of the aerodynamic drag and the inertial constraint – matching the Bloodhound’s acceleration, Figure 4. For any engine selection, the minimum margin between the available and required thrust was determined. This margin is the drag performance outcome. The margin must be positive, and should be maximized to ensure that the aircraft is always capable of matching the Bloodhound’s acceleration.

Maintaining level flight requires a balance of forces, between the total lift and weight of the aircraft, and a balance of moments, producing zero- pitching moment. The basic force diagram of this configuration is given in Figure 5. A further requirement of steady flight is positive pitch stiffness. Fluctuations in pitching moment should produce negative feedback to restore balance. This pitch stability may be characterized by the pitch stiffness – the derivative of pitching moment coefficient with respect to angle of attack: Pitch Stiffness = -(∂Cm)/∂α The pitch stability was estimated over the operating range of the aircraft under level flight conditions, Figure 6. The stability is seen to increase drastically near Mach 1, caused an aft shift of the centre of lift. The minimum stability is the longitudinal stability design outcome. It must be positive, and should be maximized to ensure stability at all operating conditions.

By solving the longitudinal balance, the effective wing and tail angles for level flight were determined over the operating range, Figure 7. Assuming a moderate constant stall angle of 15°, the minimum take-off velocity was approximated, which is the stall design outcome. Minimizing the take-off velocity allows rapid take-off, with improved repeatability.

The MATLAB performance model was optimized in modeFRONTIER, using a multi objective genetic optimization algorithm, MOGA II. The modeFRONTIER workflow is illustrated in Figure 8. A design of experiments (DOE) was constructed from 100 random parameterizations. The MOGA II genetic algorithm tested the DOE via the MATLAB model, and evolved parameter sets based on the performance outputs until over 8000 valid solutions were generated and a 3-dimensional Pareto Frontier was resolved, Figure 9. This frontier characterizes optimal trade-offs between the design objectives.

A prototype supersonic aircraft was developed to film the Bloodhound land speed record. By optimizing a generalized aircraft configuration within a large design space, the potential of available design estimates could be maximized, avoiding guess work in the preliminary design phase. A successful prototype design should reduce the time and cost of numerical (CFD) and wind tunnel testing. 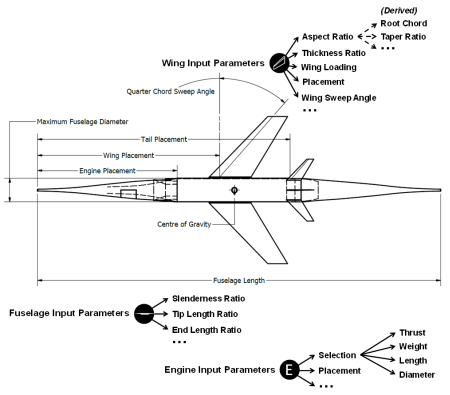 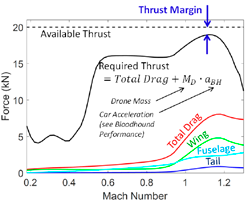 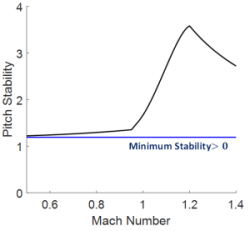 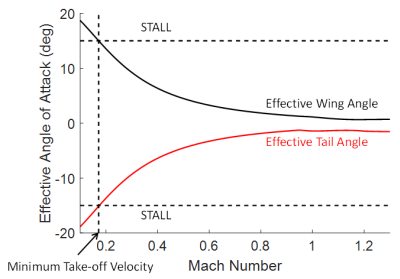 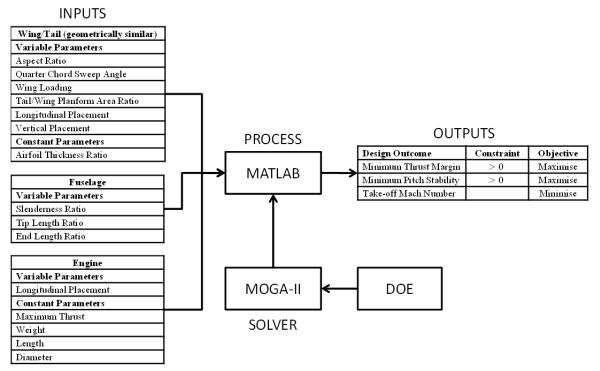 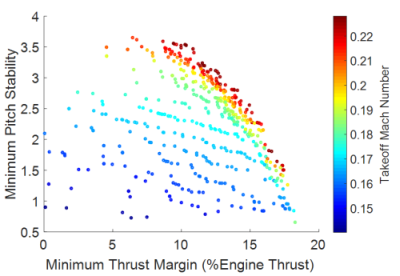 Beyond the barrier of perfection

This case study details the design optimization of an axial steam turbine of 160 MW, focusing on maximizing the total-to-total isentropic efficiency of the last three low-pressure stages of the turbine.