This article presents an example of the analysis of a powder composed of spherical particles. Since powders have a very fine heterogeneous structure, a multi-scale approach based on homogenization analysis is proposed. The macroscopic material behavior of the powder is obtained through virtual compression tests using a unit cell model representative of the microstructure. The microstructure is further homogenized by curve-fitting its material response according to the constitutive law of the macro material. The analysis was performed using Ansys® MechanicalTM and its add-on tool Multiscale.Sim.

Metallic powders are used to create new materials for many industrial manufacturing processes. Any number of metals can be used in the mixture to change the characteristics of the final product, in terms of strength, flexibility, durability, etc.
For a material with a large number of particles, particle densification is very important because there is a correlation between density and the material properties. For example, the electrodes used in rechargeable batteries consist of densely packed particles (also called as active materials). The electrons inside the individual particles are charged. This means that the electrical properties, such as battery capacity and charging efficiency, are closely related to the particle density. However, the mechanical properties also have an influence, so it is equally important to understand the mechanical properties of the product in order to improve its reliability and durability, and so on.
There are many conditions involved in creating a material full of particles, such as the shape and size distribution of the particles, and the type of material. Therefore, the material properties are not easily optimized using only actual testing; rather, it should be combined with simulation.
Many researchers have analyzed the process of particle filling. Most of them used the discrete element method (DEM)[1],[2]. The DEM was considered highly compatible with these analyses because it can efficiently calculate the motion of individual particles, which are assumed to be rigid. The inelastic behavior that occurs during the compression process is then represented by the interaction between the particles. However, since these parameters are not directly related to real phenomena, it is necessary to calibrate them using actual tests. The finite element method (FEM), on the other hand, can directly express the deformation behavior of particles, which allows us to analyze phenomena that are closer to the real problem.

This article presents an example of analyzing the particle packing problem using the finite element method. First, I will discuss the issue of particle packing to establish the initial state before compression. Multiscale.Sim™ [3], an add-on tool for Ansys® Workbench™ for multiscale analysis, was used to create the model. Next, an example of the analysis is shown whereby a rigid wall is placed around the micromodel created and then densified by compression.

Before presenting an example of the analysis of the compression process, we will consider the initial composition of the particles in the powder.
The initial placement of the particles is very important because, if there are multiple bullet gaps or bites between particles in the microstructure from the beginning, it can compromise the accuracy of the compression process analysis. The particles should be packed with as few gaps and bites as possible. By observing the initial packing state of various distributions of particle sizes before compression analysis, it is also possible to predict trends in the maximum particle packing rate after compression. As a result, we adjusted the distribution of the particle sizes considered here for three different types (uniform, gaussian and bias) and used Multiscale.Sim to fill the particles to the limits of the instrument for each condition. Each condition was defined so that no overlap was allowed between the particles. Fig. 1 summarizes the appearance and particle size distribution of the model. If the number of particles that make up the microstructure model is too small, it is not possible to create a model with a specified particle size distribution.
Therefore, we adjusted the size of the unit cell so that about 3,000 particles could be created. Consequently, we confirmed that it is possible to create a model similar to the input size distribution. A solid model with a uniform particle size was found to have a volume content of about 63%. Generally, we know the theoretical maximum volume content is 74% when the particles are regularly aligned. On the other hand, however, when the particles are randomly scattered, the upper limit of the theoretical volume content is considered to be 64%, which is almost identical to the results obtained by Multiscale.Sim.
The results demonstrate that Multiscale.Sim is capable of packing the particles to the limit. In the case of size distribution, the spaces created between relatively large particles are filled with smaller particles, so a larger volume content can be achieved than in the case of particles of uniform size. It should be possible to create an even higher volume content by increasing the probability of the presence of statistically small particles. The results of this analysis are consistent with those considerations.

The compression process analysis for densification is performed using the particle-filled microstructure model created in the previous section. The microstructures analyzed in this study are the result of extracting only a small portion of the actual structure. In order to evaluate the apparent behavior of the material based on such a partial model, the homogenization method is generally used.
In this analysis, the extracted microstructure is used as a unit cell, and conditions of periodic symmetry are defined in all directions on its outer surface. However, if the particle-free region is not filled with other materials, such as resin, it is inevitable that small particles will escape from the unit cell during compression. Therefore, an alternative is to create a rigid wall that touches each of the six outer surfaces of the unit cell. One of these rigid walls is then loaded by forced displacement and the unit cell is compressed. The compression displacement was applied to about 45% of the macro strain and then returned to its pre-compression position. The other five rigid walls were fully constrained by the displacement degrees of freedom. The elasto-plastic properties of the Mises yield function were defined for the individual particles. The friction coefficient for all interfaces between each part was set to 0.3.
These models were used to perform an implicit analysis using Ansys Workbench. In order to ensure the stability of the analysis, a transient analysis was conducted to take into account the effect of inertia. For the loading history, the compression and unloading processes were configured to take 1 second each. These analysis conditions are shown in Fig. 2.
Fig. 3 shows the deformation shapes of the microstructure and the distribution of the equivalent plastic strain at various points in the compression process. The analysis was performed on cases with no size distribution and cases with a Gaussian distribution. The displacement constraints defined on the rigid walls created conditions that were close to hydrostatic pressure from a macroscopic point of view. Large plastic strains can be observed inside the microstructure despite the fact that the particles do not yield due to hydrostatic stress. This means that the heterogeneity of the microstructure generates a complex stress field within the microstructure, even though the macroscopic conditions are hydrostatic.
Fig. 4 shows the macroscopic stress-strain characteristics calculated from the reaction force of the rigid wall under compressive displacement and the history of porosity in the unit cell. In the compression process of such porous materials, the tangential gradient tends to increase rapidly with increasing strain. This is due to the fact that the voids inside the microstructure are reduced by compression as shown Fig. 5.
This reduces the inhomogeneity and brings the inside of the microstructure closer to the same hydrostatic pressure conditions as the macroscopic external force.
In this paper, the accuracy could not be verified because the actual measurements were not made under the same conditions as the analysis. However, since the stress-strain shape shows the same tendency as the generally acknowledged facts, it is qualitatively considered to have captured the actual behavior to some extent. In addition, as shown in fig. 4 and fig. 5, we believe that the changes in the inelastic material behavior during press forming due to differences in particle size distribution qualitatively capture the correct tendency. 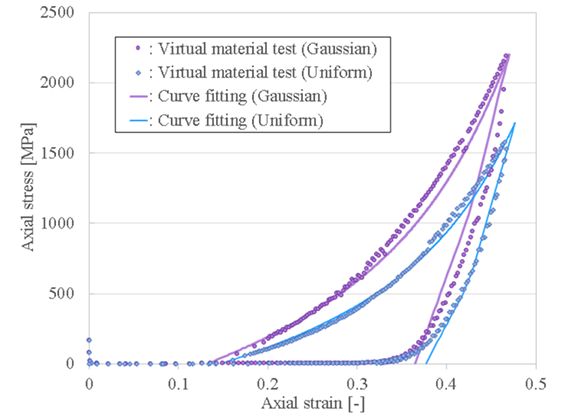 Fig. 4 – Macroscopic stress strain curve as a result of the compression analysis 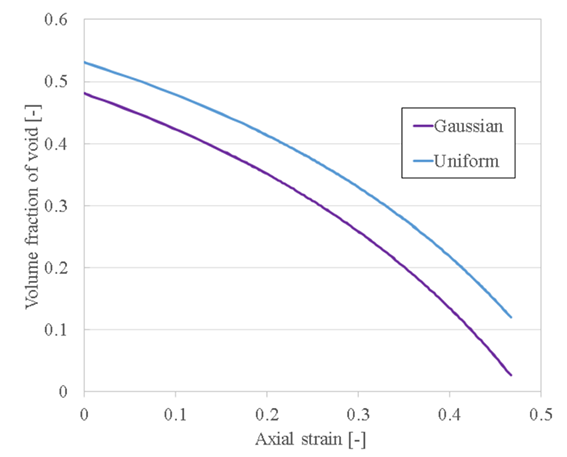 Fig. 5 – History of the volume fraction of the void in the microstructure during compression

Up to this point, we have analyzed the material behavior during the compression process using a microstructure model composed of particles.
However, this approach is computationally expensive and can only focus on extremely limited areas for analysis.
Modeling for heterogeneity is not appropriate for actual productlevel objects. Therefore, at the end of this article, we attempt to replace the heterogeneous microstructure with a homogeneous body.
To do so, the behavior of the macroscopic material obtained in the previous section must be adapted to the material composition radius shown in Fig. 4. Powdered materials composed of particles show remarkable elastoplastic properties even under hydrostatic conditions. These properties cannot be expressed by the Mises yield function, where deviation stress triggers the generation of plasticity.
In this paper, Drucker Prager’s capped model [4] was used. This is a typical constitutive law for materials to represent the yielding behavior dependent on hydrostatic stress (accessible with the command “TB,EDP,,,,CYFUN” in Ansys software). Fig. 6 shows the curve fit analysis flow. The homogeneous blocks defined according to the Drucker Prager constitutive laws were compressed by the same boundary conditions as in the previous section. The material constants were adjusted so that the stress-strain properties obtained in this analysis correspond to the response of the heterogeneous microstructure model analysis evaluated in the previous section. Ideally, this adjustment work should be done by optimization analysis, but in this case, it was performed manually. In future, we plan to implement a fitting algorithm based on the optimization analysis in Multiscale.Sim products.
The result of the fitting is shown as a solid line in Fig. 4. There is a slight error in the results. However, the tendency for the stress to increase exponentially with increasing plastic deformation, and the tendency for the unloading curve to move downwards in a convex manner, are well captured. The effect of adjusting the material properties to change the particle size distribution is also well represented. Although the fitting results may not yet be sufficient, we do not think that this is a problem caused by the ability to express the constitutive law of the material. We believe that more accurate fitting will be possible in future by incorporating an optimization algorithm.

The results of the analysis showed that the material behavior during compression, and the degree of densification that can be achieved by compression, can vary greatly depending on the size distribution of the particles. Because of the wide range of parameters that determine the material behavior of powders, it is not realistic to design materials based on actual measurements alone. It is expected that the efficiency of material design will be greatly improved by using the virtual material testing analysis introduced here.

Koji Yamamoto is Technology Specialist and Developer of Multiscale.Sim at Cybernet System Co.,Ltd.

Fig. 2 – Overview and conditions for the virtual material test of the compression analysis

Using this technique, all material constants can be evaluated without expensive experimental campaigns.

By taking advantage of EnginSoft experience in Simulation Based Engineering, by means of the FEM analysis, the Durability, Structural Integrity and Buckling behavior of a new group of toxic liquid and fuel storage tanks have been investigated.