This paper presents the main steps taken in the development phase of the IVECO cab suspension brackets to comply with the new ECE R29 crash regulation for Heavy Commercial Vehicles (HVC). In this study, modeFRONTIER drives and guides different CAE software (Hypermesh, Radioss, Nastran and MATLAB) to fulfil all the requirements for the component under examination. The IVECO cab suspension brackets are actually designed to deform considerably during the ECE R29 tests, while still being strong enough to survive the IVECO fatigue mission without any failures.
These are two opposing goals: a typical challenge for optimization software like modeFRONTIER.

Regulation ECE R29.03, which came into force in January 2011, applies to commercial vehicles with a separate, category N driver’s cabin. It prescribes the requirements for the protection of the occupants of the cabin of the vehicle in a head-on collision or in the event of overturning. This is a TYPE-APPROVAL test: you cannot sell the vehicle if it does not comply with this regulation!

ECE R29.03 comprises three different tests after each of which the cabin must exhibit a survival space that allows the accommodation of a mannequin at the 50th percentile. Further requirements are that the doors must not open during the tests, and the cabin must remain attached to the chassis.

Test C denotes a strength test of the cab roof intended to evaluate the resistance of the cabin in the event of overturning by 180°. It is composed of two sequential sub tests:

IVECO performs the ECE R29.03 evaluation using virtual simulation: the FE model used is quite complex because all the details of the cab are necessary – structure, trim, suspension and so on.
This results in very long calculation times: about 24 hours using 48 CPUs which, of course, is not suitable for optimization tasks during the concept design phase.
During the evaluation of ECE R29.03 Test A, we noticed that the kinematics of the front suspension could help us to reach the goal: in detail, the blue bracket (Fig. 3) pushes back the green interface and, consequently, the red bracket. We observed that if the red bracket were to collapse we would be able to easily reach the objective.
We therefore designed a small model of the red bracket and its kinematics to study its collapse using a simulation of a few minutes: as a result, we obtained a force-displacement graph that helped us to identify the collapse and the level of force required to achieve it.

The IVECO strength and durability simulation

As shown, the cabin suspension bracket should deform during the ECE R29 type-approval tests, but at the same time, it needs to be rigid and sturdy enough to survive the vehicle’s fatigue mission on the road without failure due to customer use and misuse. IVECO manages the durability test both physically and virtually; the virtual approach is time-consuming due to the tuning of the fine mesh, which has a real influence both on durability impairment and on the length of the simulation time. During the development phase, a smarter and quicker approach was used in order to reduce response time. The bracket was evaluated using:

Using an envelope stress map for post-processing all the load cases enables you to detect and highlight the areas of failure in the fatigue test (see Fig. 4). On a standard workstation, execution takes a few minutes instead of a few hours using the traditional procedure for durability calculations.

The two FE models (Radioss and Nastran) are generated from a single Hypermesh model. Mesh morphing was used in this activity: by working on the handle nodes, it is possible to stretch, deform, and enlarge the parts thus modifying the shape and geometry of the structure. The morphing is applied simultaneously to the two different FE models and then Hypermesh exports the input file for each solver (see Fig. 5).

The outputs from the simulations are as follows:

The input parameters are the coordinates of the morphing nodes. A Hypermesh macro file collects all the inputs, then opens the model, morphs the parts, and writes the input files for the two software programs: Nastran and Radioss. Using the sincro node (see Fig. 8), you can run the two simulations in parallel: this reduces the total time for each design to the longer simulation time (and not to the sum of the two simulation times, as in the case of sequential execution). The simulation results are identified using the methods explained previously.

In order to achieve a better design than the original, the constraints for the Radioss crash force and the Nastran stress levels must be lower than for the initial design.
The optimization was performed in modeFRONTIER by moving the handle morphing nodes and requesting the reduction of the:

The following graph in Fig. 9 shows a scatter plot reporting the:

The constraint limits are indicated in the graph so that only the grey points are feasible.

At this point it is possible to identify the Pareto frontier (see Fig. 10) where some designs have been selected to see the shape and stress results obtained (see Fig. 11).
Since the original design already had an acceptable level of strength to achieve positive results in the crash type-approval testing, we decided to reduce the stress level as much as possible for more reliable durability results while maintaining the crash force level. The final design used is displayed in the following photograph (see Fig. 12) showing the component before and after the successful typeapproval test. It is possible to see that the simulation results match closely with the real deformation.
The durability test was also performed without creeks and breakage, so that the vehicle is now on the road.

A similar approach was also taken for the other suspension brackets due to the different layouts, different cabins, left/right side attachments, number of axles, vehicle typology (on-road, off-road), etc. all of which require a different bracket geometry. modeFRONTIER enabled us to automatically investigate a huge number of simulations, evaluating thousands of different shapes in just a few weeks. It is useful in the investigation and optimization of designs. 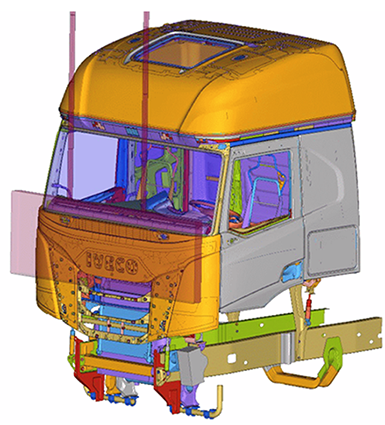 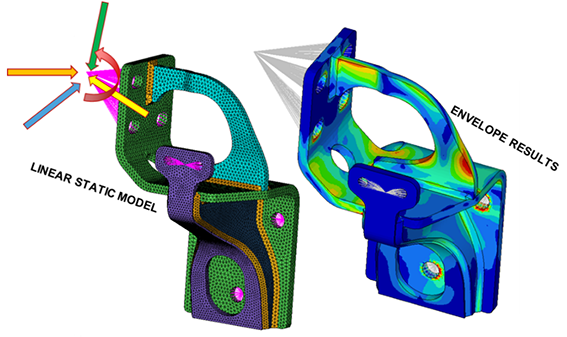 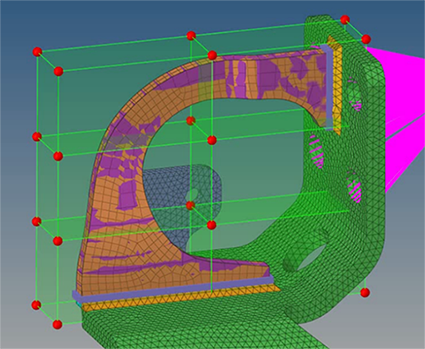 Fig. 5 – Morphing volume on the part to modify it 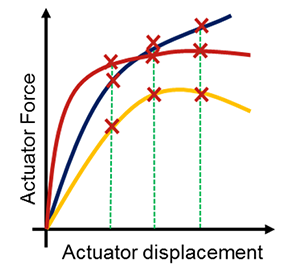 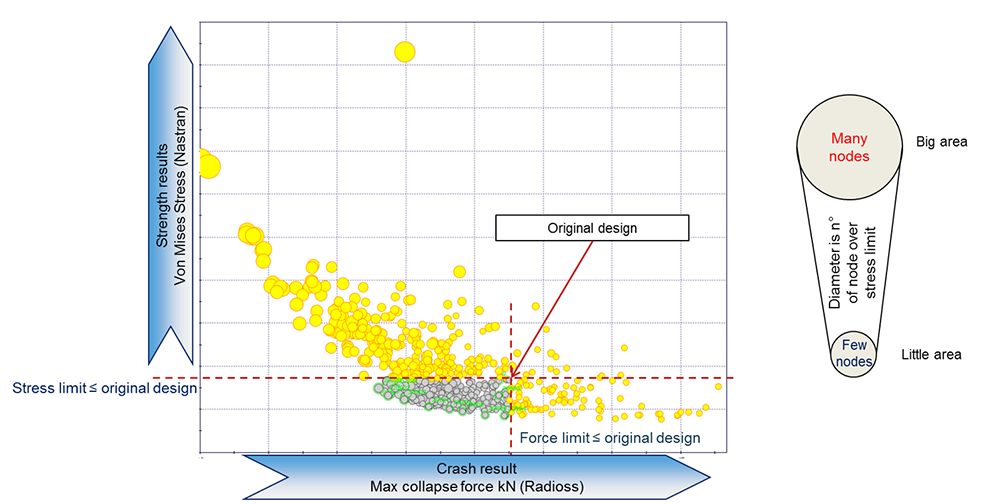 Fig. 9 – Scatter plot of the results 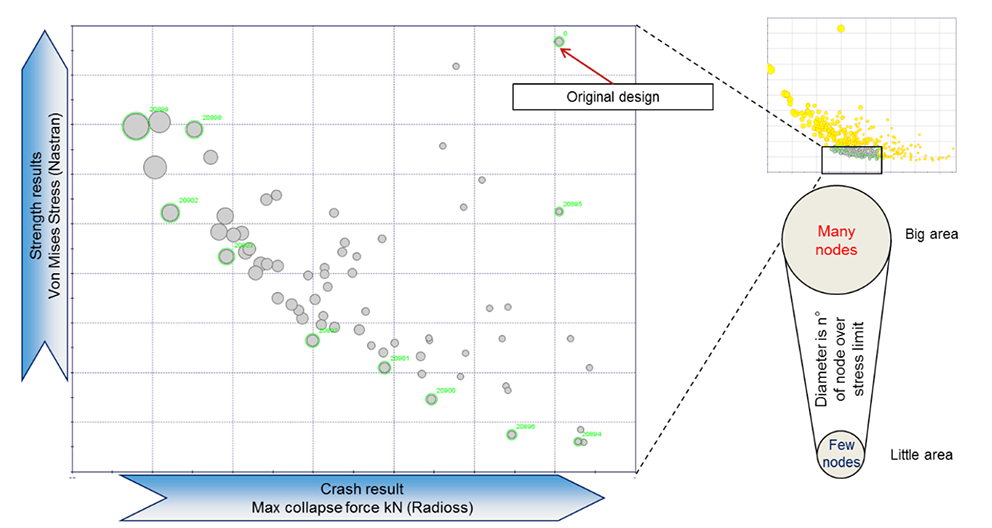 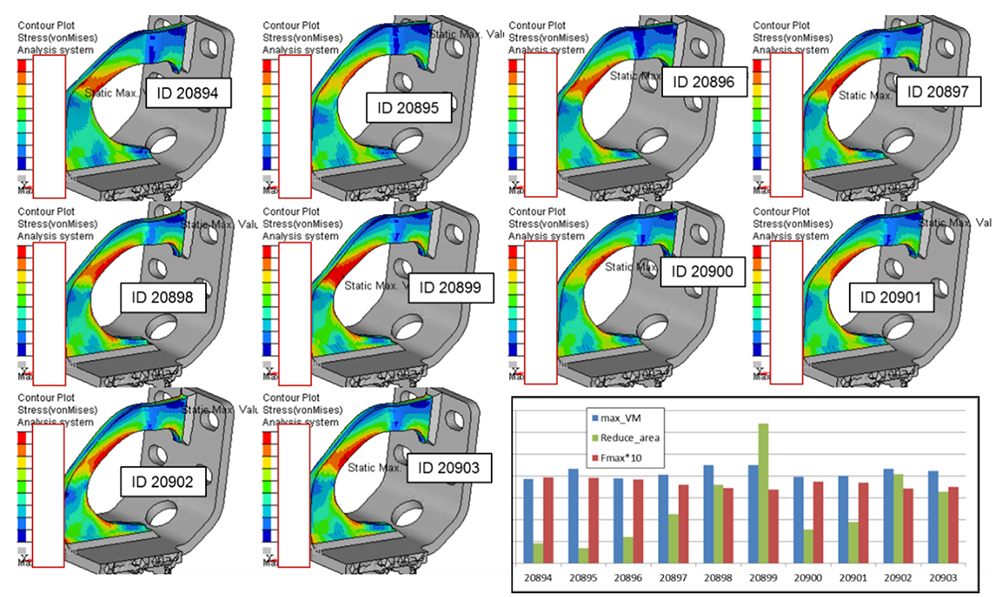 The residual strength, in particular the compression strength after damage due to low velocity impact, is one of the most critical issue for composite laminates.