Moving particle simulation (MPS) method can be applied in a two-stage simulation in computer aided engineering to resolve fluid structure interaction problems for industrial design. In this technical article, we demonstrate how to apply a one-way coupling technique using a combination of ParticleWorks and LS-DYNA to estimate tsunami damage to a vehicle.

This technique can be used for resolving problems with incompressible fluid dynamics in various industries in the product design, development and manufacturing phases.

In the first stage of this simulation, we create the vehicle as a rigid body particle cluster, calculate the pressure distribution on the particle structure and map it on the STL vertexes to obtain the pressure history, which is converted into pressure load for the second stage of the simulation.

In the second phase, we obtain the deformation and stress distribution on the vehicle from both the impact of the tsunami and the vehicle’s consequent impact with the nearby wall. 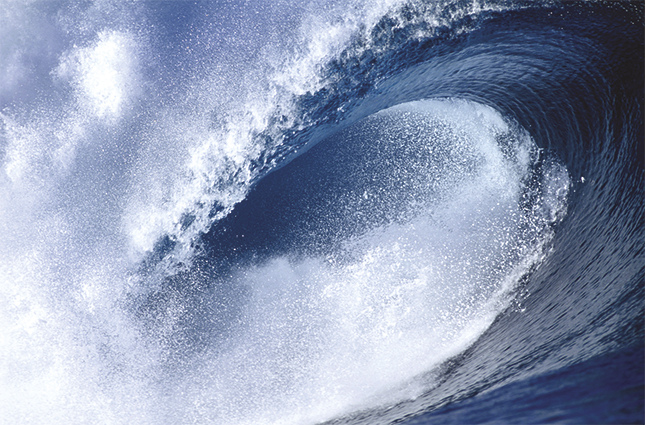 In recent years, various particle methods have been developed as numerical simulation techniques and used in product design and development. The particle method provides some advantages which can be summarized as follows:

Since the particle method is fully Lagrangian, the advection term can be omitted in the governing equation. Hence numerical diffusion coming from the advection term treatment can be eliminated through the computation. A unique particle method called MPS has been developed and used in various CAE application problems. MPS was originally developed as a discretization scheme of incompressible viscous flow and the first paper dedicated to MPS was published in 1996[1]. The original MPS adopted a semi-implicit time integration scheme, and the abbreviation MPS stands for “Moving Particle Semi-implicit” method. In the meantime, also a fully explicit version of MPS has been developed. Today, MPS is known as a “Moving Particle Simulation” method. MPS is a suitable numerical procedure for the simulation of ordinary incompressible flow, it is applied in particular for different fluid flow problems in the engineering field. In this article, an efficient one-way coupling technique to estimate deformation of products using the MPS-based CFD software Particleworks and the explicit FEM software LS-DYNA is presented. The numerical procedure of MPS is also discussed briefly.

FSI problems need to be solved very often in industrial product design and development. LS-DYNA offers capabilities for modeling FSI problems using SPH (Smoothed Particle Hydrodynamics) or ALE (Arbitrary Lagrangian Eulerian) methods. However, computation of FSI problems with SPH or ALE is very time consuming because a compressible flow solver needs to be used in an explicit time integration scheme with very small time steps. In contrast, MPS, as an incompressible flow solver, can take larger time steps and treat the fluid region very efficiently. Thus a combination of Particleworks and LS-DYNA may be a practical solution to treat the FSI problem. The application example using Particleworks and LS-DYNA presented here is a tsunami simulation of a vehicle. The purpose is the damage estimation of a vehicle drifted by tsunami. If passengers can escape from the drifted vehicle by opening the doors, more people may survive the disaster. A safer design to protect passengers from the impact of a tsunami may be realized. In this context, the suggested procedure of the simulation is as follows:

The flow of the tsunami and the behavior of the vehicle are obtained in the first stage as shown in Fig.2. The vehicle is placed at the position of 1,000 mm from a rigid wall at the beginning of the simulation. Water entries the model from the inflow with a velocity of 4,000 mm/s. The vehicle is washed away and crashes against the wall. The event interval was 1.35 seconds. With this simulation, we could obtain the pressure history acting on the surface of the vehicle. The pressure was calculated on each particle during the simulation and then it was mapped on the STL vertexes by post processing. After the tsunami simulation, the pressure history was converted into pressure load for the LS-DYNA crash simulation. Figure 3 shows the mapping process of the pressure distribution through particles to finite elements. In the second phase, a transient analysis of the vehicle model using LS-DYNA was executed and deformation and stress distribution was obtained through the simulation. The vehicle motion caused by the tsunami is shown in Fig.4. As the illustration details, the vehicle is pushed towards the wall, hit against the wall and lifted up by the pressure of the tsunami. As a result, large deformation occurs on the vehicle body. Figure 5 shows the deformed geometry and von Mises stress distribution of the vehicle. Large deformation can be seen not only on the right hand side where the vehicle contacts with the rigid wall, but also on the left hand side.

The governing equations for incompressible flow are the continuity condition Eq.1 and the Navier-Stokes equations Eq.2,

MPS defines the kernel function of the form as,

A particle interacts only with surrounding particles within the radius re. Particle number density is defined using the kernel function as follows:

where, d; spatial dimension (2 or 3), n0; initial particle number density, and ; correction coefficient. The governing equation Eq.2 is discretized using Eq,5 and 6 and solved under the continuity condition Eq.1 with a semi-implicit algorithm similar to the conventional Simplified MAC method.

An efficient one-way fluid structure coupling technique using Particleworks and LS-DYNA was presented. Because MPS in Particleworks can be applied for incompressible fluid dynamics, this simple procedure can be used widely for product design, development and manufacturing in various industries. The numerical procedure of the particle method MPS was also introduced briefly. 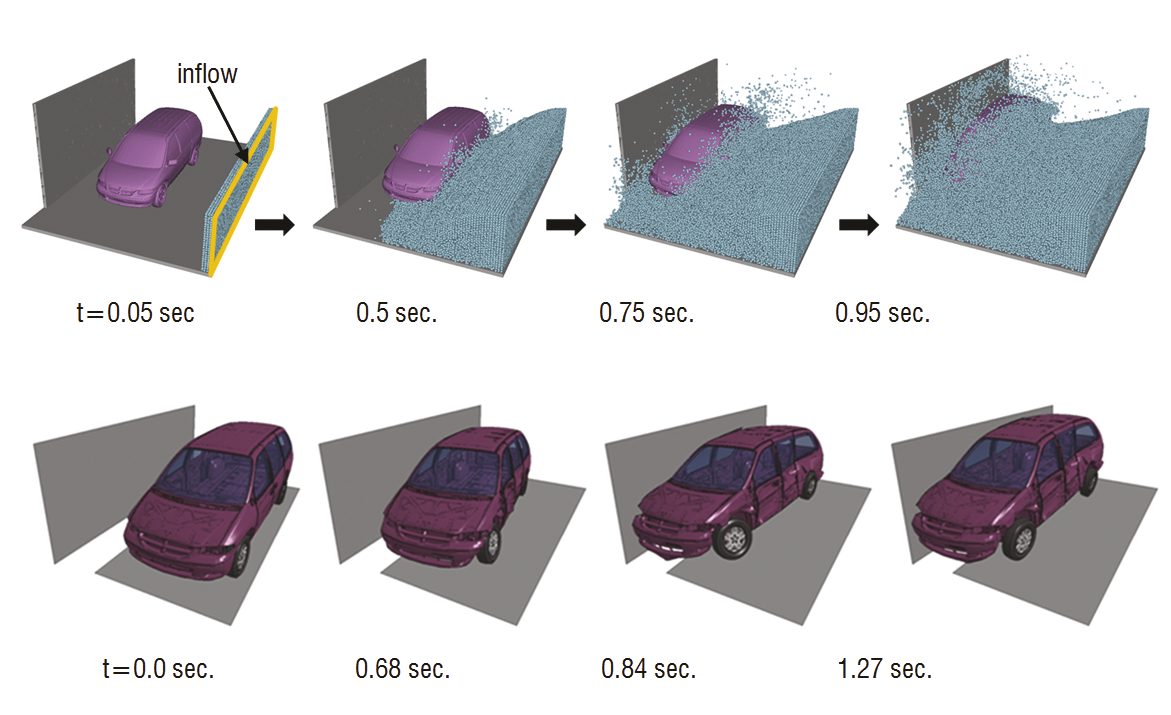 DOWN: Motion of the vehicle caused by the pressure of the tsunami 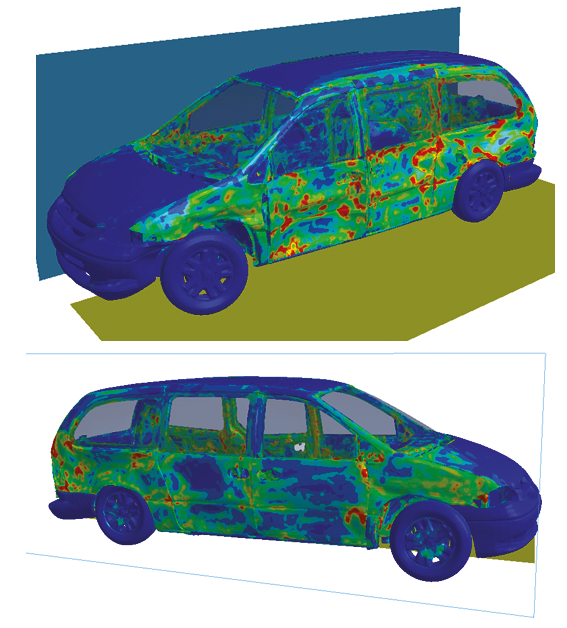 Deformation and Mises stress distribution of the vehicle at 1.0 second

UP: tsunami side
DOWN: wall side

Wheels are products with key geometrical and structural specifications.

A new methodology is presented, following an integrated process-product analysis approach, showing some benefits related to increased accuracy and the potential application of new optimization methods.