CFD simulation of an axial piston pump with Ansys CFX

Thanks to their compactness and efficiency, swashplate axial piston pumps are widely used as fluid power sources in fixed and mobile applications that require high pressure and variable flow rates. In order to guarantee high performances, reliability and reduced time-to-market, their development process requires more and more the use of advanced simulation tools. With specific reference to fluid dynamic simulation, different approaches are available; nowadays, the most common one is still represented by the lumped parameter method (0D- 1D models). The advantages of this approach are the fast computation time and the ease of attaining convergence, but some physical phenomena are inevitably simplified or even neglected at all. In this sense a three-dimensional approach is the most advanced and accurate method; however, there are still considerable challenges to be overcome before reach a comparable level of usability: CPU time and convergence issues, in order to solve complex transient analyses characterized by small clearances and high pressure drops.

This work presents the CFD model of an axial piston pump and compares it to a validated 0D model. The main objective of this study was to analyze the flow field inside the pump, focusing on the aspects that involved the main inner volumes, such as the filling and emptying dynamics in the piston chambers and the flow field inside the ducts. Finally, particular attention was paid to the pressure transition phases, investigating their potential role in triggering erosion.

The case study was Casappa’s new LVP140 piston pump, a swashplate piston pump with a maximum displacement of 140 cc/rev (see Fig. 1), capable of working in mobile and stationary applications, with an open circuit and a hydraulic pressure of up to 420 bar.
In order to simulate the main fluid dynamic aspects that are involved in a working cycle, it is necessary to consider the main volumes inside the pump (Fig. 3), including: 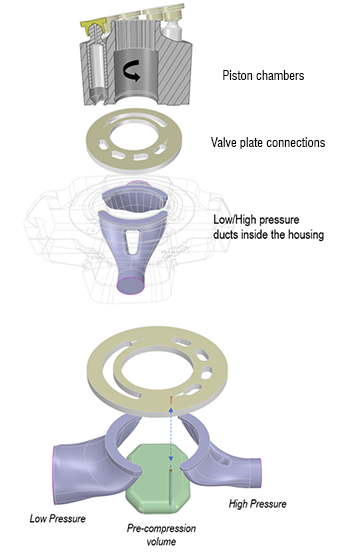 Fig. 3 - Main volumes inside the pump

Special attention was paid to the valve plate design because the transition between the low-pressure and high-pressure connections and vice versa affects the pump’s performance in terms of efficiency and noise generation.
In addition to the volumes described above, LVP140 is characterized by the presence of a noise-reduction feature, called “pre-compression volume”. This feature makes this pump ideal for industrial applications where, due to the presence of electric motors, the pump becomes one of the first sources of noise. The pre-compression volume is an isolated chamber realized in the rear cover of the pump: it is connected to the outside only through an orifice in the valve plate, located in the transition region from low pressure to high pressure.
Its function is to partially pressurize the fluid inside each piston before it is connected to the high-pressure line, in order to ensure a smoother pressure transition. In this way, flow ripple (the most important source of noise) can be minimized, by reducing backflows from the delivery to the suction line, and peak flow rates in the delivery.

The computational fluid dynamics (CFD) model of the pump was developed using the commercial software Ansys CFX (Fig. 4). The simulation was time dependent to account for the rotational and reciprocating movements of the pistons. Fig. 4 shows the simulated working condition.
Modeling the entire pump, in particular the pre-compression volume, was especially challenging because of the high pressure drops (in the order of hundreds of bar) and the small transition zones: special attention was paid to the meshing phase, using high mesh refinement in the transition zones in the valve plate, such as the grooves and orifices, where the highest fluid velocities are reached.
The rotating and reciprocating motions of the pistons was managed using the domain motion and mesh deformation features within CFX. The rotary motion was obtained by setting each piston domain as rotating, while the reciprocating motion was achieved through mesh deformation, which involves a displacement diffusion model with constant mesh stiffness. 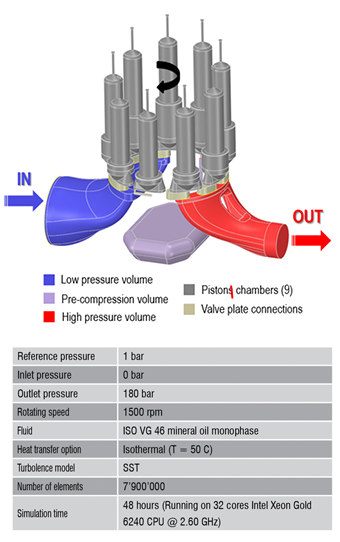 The model was validated by comparing the predicted pressures and flow rates with those obtained from a well-established 0D circuital model developed in the Simcenter Amesim environment (Fig. 5). The lumped parameter model, which has been developed over the years in collaboration with the Polytechnic of Turin and validated through experimental tests, is frequently used in the design phase of Casappa’s components.
In just a few minutes of simulation, the 0D model estimates pump performance such as piston pressure peaks, internal backflows, flow ripples, and forces between internal components. In addition, it can predict cavitation conditions by simulating the dynamics of aeration (air release and dissolution in oil) and of vapor generation. However, since the fluid was considered as monophase in the 3D model, Amesim’s full cavitation model was disabled in this study to obtain a consistent comparison between the two approaches.
Fig. 6 shows the comparison of the pressure inside a piston chamber and its corresponding flowrate. The results are perfectly comparable in all the phases. Owing to the absence of the gas phase, a non-physical negative pressure is achieved inside the pump chamber.
Fig. 7 shows the flowrate exchanged between the pre-compression volume and one piston. As soon as the transition area is uncovered, oil flows from the pre-compression volume to the piston chamber, which is at lower pressure (1).
Due to the high pressure drop, the oil jet is particularly intense and, in a reduced angular phase, is able to pressurize the piston chamber (2). Therefore, when the piston is connected to the delivery line, a re-charge flow is established from the delivery to the pre-compression volume (3-4).
The comparisons reported show an excellent correspondence between the two models. Although the 0D model remains the best tool in terms of computation time and ease of reaching convergence, a three-dimensional approach is the most advanced and accurate method. A CFD model can predict the spatial distribution of pressure and velocity within the pump allowing the following to be explained: filling-emptyng dynamics, flow field distribution, identifying vorticity and stagnation areas (Fig. 8). It was also useful in understanding the erosion phenomena that was observed on the test bench under extreme working conditions.
For example, Fig. 9 shows the velocity contour and its corresponding normalized vectors within the piston chambers while it begins opening the connection with the pre-compression volume as it moves from the suction region.
Due to the high pressure drop, a highspeed oil jet with a component of nearaxial velocity hits the surface of the cylindrical piston seat. Only later, when the piston intercepts the delivery groove, the flow is partially diverted.
The oil jet reaches high speeds, therefore the impact against the cylinder surface probably generates the erosion visible on the surface of the actual component subjected to the endurance test.

In this work, a CFD model of an axial piston pump, operating at high pressure, was created to investigate the fluid dynamic aspects involving the main volumes inside the pump.
The model was validated using a quantitative comparison of predicted pressure and flow rates with those obtained from a validated lumped parameter model; the comparison shows an excellent correspondence between the two models.
Although the 0D model remains the best tool in terms of computation time and ease of reaching convergence, the 3D model proved to be the most advanced and accurate method to investigate the fill-empty dynamics, flow field distribution, and the erosion phenomena observed on the test bench under extreme working conditions.
The activity does not end here; the next steps will include the simulation of the most critical working conditions, i.e. the highest speed and pressure, and the introduction of a full cavitation model that will consider the release of air and steam, in order to investigate the spatial distribution of gas inside the pump. 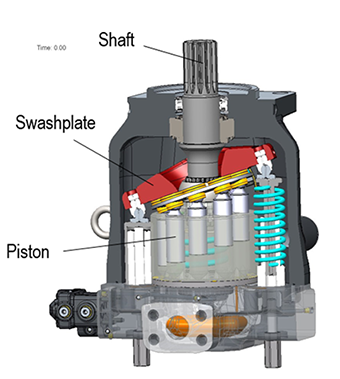 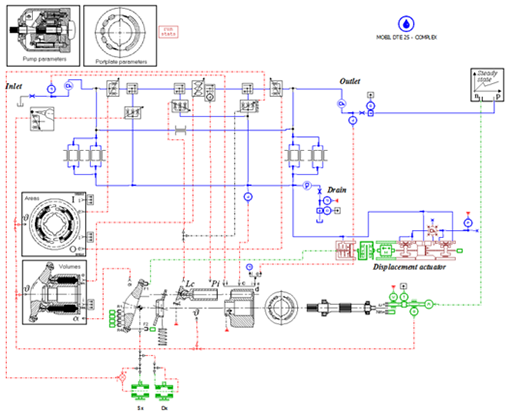 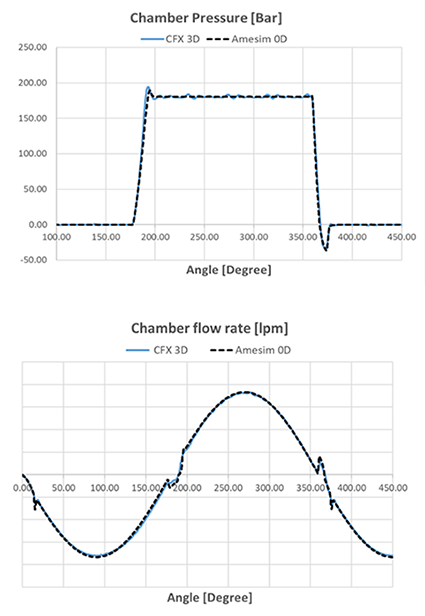 Fig. 6 - Comparisons of pressure and flow rate inside a piston chamber 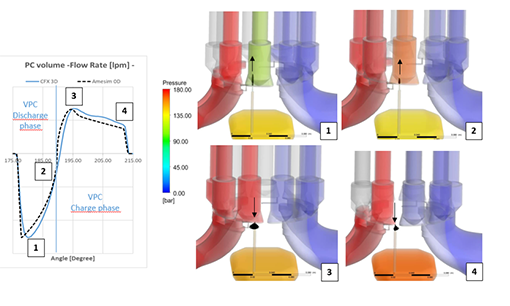 Fig. 7 - Flow field inside the pump 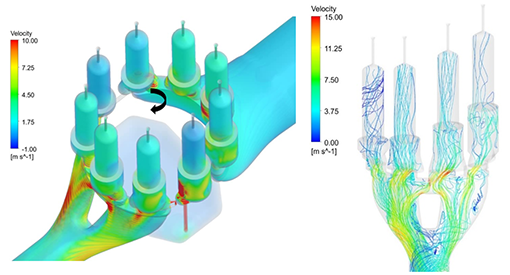 Fig. 8 - Flow field inside the pump

Fig. 9 - Example of detection of the erosion phenomena

Casappa is an Italian company that has been working worldwide for more than sixty years in the field of fluid power. We design and manufacture the main components of the hydraulic system for applications that range from construction to industrial vehicles, material handling, agriculture and industry. Our main products are aluminum and cast iron gear pumps and motors, variable displacement axial piston pumps, electronic controls and filters.
We strongly believe in product customization, to target the specific needs of each customer, creating long term collaborations with them; we achieve this flexibility thanks to the use of the most modern design engineering, innovative simulations and lab testing technologies.

Simulation is nowadays strongly connected to new product development in most high-technology industries.