CFD-Driven Design of a Ventilation System for Kitchen Hoods

Energy consumption by household appliances is an increasingly significant issue for designers and compliance with energy consumption directives forces companies to design new products with careful attention if they wish to secure a place in the market. This article presents a study that the Elica Group commissioned from EnginSoft to support it engineering team in redesigning the ventilation system of its “Tilly” kitchen hood model to increase its efficiency and raise the product to a higher energy class, to comply with EU energy consumption directives and to consolidate Elica’s market-leading position. Using Computational Fluid Dynamics (CFD) modelling, EnginSoft designed various configurations within the parameters and limits set by Elica, which were then tested in the Elica Group’s laboratory so that a final optimized design could be selected based on manufacturing considerations.

The Elica Group has been present in the cooker hood market since the 1970s, it is chaired by Francesco Casoli and led by Giuseppe Perucchetti and today it is the world leader in terms of units sold. It is also a European leader in the design, manufacture and sale of motors for central heating boilers. With approximately 3,400 employees and an annual output of over 18 million units, the Elica Group has eight plants, including Italy, Poland, Mexico, Germany, India and China. With many years’ experience in the sector, Elica has combined meticulous care in design, judicious choice of material and cutting edge technology guaranteeing maximum efficiency and reducing consumption making the Elica Group the prominent market figure it is today. The Group has revolutionized the traditional image of the kitchen cooker hood: it is no longer seen as a simple accessory but as a design object which improves the quality of life.

Energy consumption is becoming a main issue for designers in the field of house appliances. After the EU Directive 92/75/EC, the EU Energy Label must now always be displayed at sale, dividing energy efficiency into classes from A to G, in decreasing order of efficiency. Such regulation has forced companies to pay great attention to the design of new products, in order to find a place in the market. The presented work is a consequence of the above-mentioned directive. Elica commissioned EnginSoft to support their engineering team in the optimization of the “Tilly” kitchen hood model, shown in Fig. 1. The target was to increase the efficiency of its ventilation system, rising to higher energy classes, intensifying their position on the market.

A 3D numerical model of the kitchen hood was implemented by EnginSoft, on the base of CAD geometries provided by Elica. The model was built in ANSYS Design Modeler, combined with Blade Modeler, a software specialized in the parametric design of turbomachinery components (see Fig. 2). ANSYS CFX was the CFD solver used to evaluate the fluid dynamics of the system. In order to stabilize CFD accuracy, the model considered a semispherical plenum both in the inlet and in the outlet region. The boundary conditions imposed were atmospheric pressure in the inlet opening and the air mass flow rate set to exit the domain. By providing various mass flow rates, a P-Q curve could be graphed for every studied configuration.

The margin of manoeuvre in the improvement of the ventilation system was dictated by the box size and by the positioning of other components inside the hood. Freezing such geometry, Elica gave EnginSoft carte blanche for the design of a new fan and an optimized volute. All the designs were tested with the same engine, another constraint which was considered in the design process, to maintain the overall cost of the product. During the optimization phase of the activity, more than 50 configurations were studied. EnginSoft initially worked on the global configuration of the ventilation system, re-arranging the coupling of engine and fan, in order to widen the suction area, and as an outcome develop a less resistive circuit. The engine was turned upside down and the fixing of the fan was modified, inserting three thin beams to allow the anchorage. The first tests with the new configuration were successful. Secondly, work was done on the blade angle of attack, in order to obtain a smoother incidence of air and determining its optimal value from fluid dynamics considerations. The blades were then curved backwards, lowering the generated torque and thus broadening the possibilities which could undergo investigation. The blade chord was lengthened, enhancing the pressure rise. Also, tests were performed analyzing the effect of a different number of blades, the insertion of splitters between blades and a possible twist in the blade profile. Furthermore, the volute profile was changed to match the ideal fan. Single modifications were compared to the baseline model utilizing the OVAT (One-Variable-At-a-Time) optimization cycle. The successful results achieved led to a combination of modifications, evaluating the improvements due to the synergy of effective factors.

Moreover, different fan types, other than the standard ones on the market, were considered and investigated. Such innovative ventilation systems are better applicable to higher quality kitchen hoods, so such work was thought to be also suitable for other models produced by Elica.
The optimal configuration (appreciable in Fig. 3) resulting from this study was soon tested in Elica’s laboratory, as a result of their internal rapid prototyping capabilities. In about a week, the full process from an optimized CAD geometry to the tested P-Q curve of the system could be obtained.

The baseline configuration was compared to the experimental data available, demonstrating great agreement, as shown in Fig. 4. The numerical results were slightly underestimating the system’s performance, so it was thought to keep the mathematical model fixed and expect a higher efficiency from the experimental tests. Only after the confirmation of a strong correlation between CFD and laboratory assessments, was the optimization phase performed. Three solutions were presented to Elica’s engineering team, which chose the ideal one to fit the kitchen hood model, considering the manufacturing needed.
Fig. 5 shows a few steps in the optimization process, indicating a gradually increasing pressure rise generated, from the baseline to the optimized model. The internal fluid dynamics was fully analyzed, assessing velocity direction, local backflows, the overall fan performance, pressure losses due to the air entrance in the ventilation system and the effectiveness of the volute (see Fig. 6). Also, the torque was monitored and the rotational speed of the fan was depending on the torque vs. angular velocity curve of the engine.

The ideal configuration designed by means of CFD analysis was tested in Elica’s laboratory, allowing a full comparison between the baseline model and the optimized model utilizing the same test bench and the same engine. Fig. 7 shows the P-Q curve of the system in the two configurations. The increase of pressure rise is approximately +113% and the mass flow is 36% higher than the registered one in the baseline system. The average energy consumption in the baseline configuration was decreased by 30%.
Such improvements determined a 276% rise in efficiency. Also, the BEP (Best Efficiency Point) was brought to higher mass flow rates, now increased by 40%, as specifically requested by Elica.

In summary the study led to the following considerations: 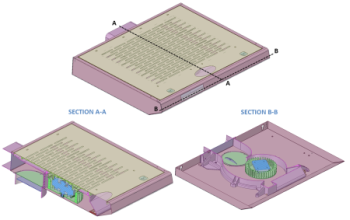 Figure 2 – Partial view of the CFD baseline model of the kitchen hood. The two plenums are not visible. Inlet grid in orange, the engine in green, the original fan in blue

Figure 3 – Partial view of the CFD optimized model of the kitchen hood. Inlet grid in orange, the engine in green, the original fan in blue 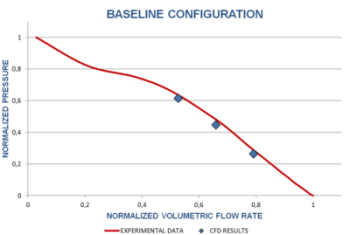 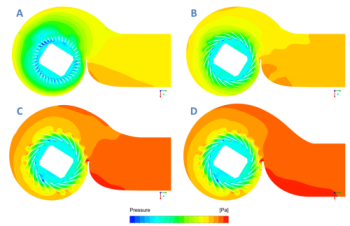 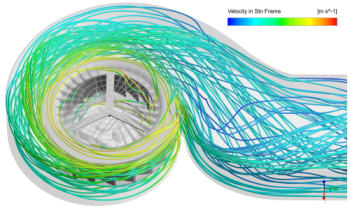 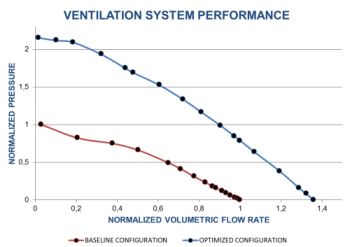 Figure 7 – P-Q curves of the ventilation system, before and after the optimization performed by EnginSoft 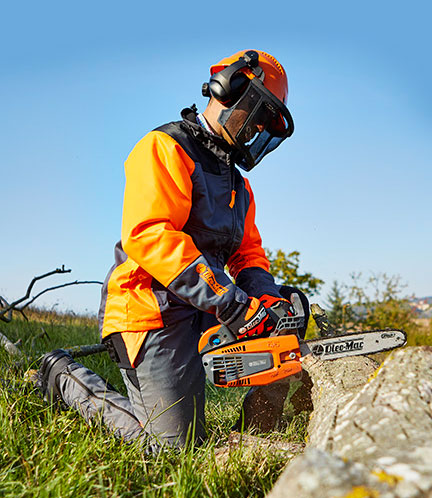 Solving the chainsaw kickback problem with Maplesoft and ANSYS

The avoidance or reduction of chainsaw kickback is a key safety feature for manufacturers. The challenges for engineers are to obtain more accurate analyses of the problem over the tool’s lifecycle.