Many industries make use of burners to meet their needs for thermal energy. The design of burners and the related heat transfer equipment must, by necessity, fulfil stringent safety requirements – both to keep operators and staff safe and to avoid damage to equipment. In the oil and gas industry, some design practices dictate the maximum flame height in relation to the size of the radiant chamber for fired equipment. The flame length then usually undergoes dedicated firing tests. In this technical case study, EnginSoft was called in to assist in the application of Computational Fluid Dynamics (CFD) to model the flame size of a regeneration gas-fired heater for a project in Oman.

The aim of the test was to determine the burner’s flame height in three different operating conditions. A numerical simulation was used because of the difficulties of undergoing physical burn testing. It also saved the design team time and money in the design and testing process. 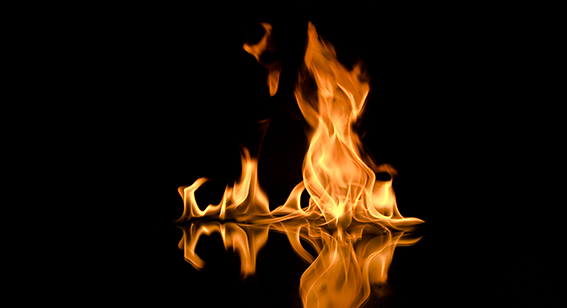 Burners are widely used to satisfy the need for thermal energy in many industries. The design of a burner and the related heat transfer equipment must fulfill stringent safety requirements in order to avoid issues during operation. One of the risks is that the flame could damage the tubes or other parts of the equipment with the consequent safety issues. In the oil and gas industry, some design practices for fired equipment dictate the maximum flame height with respect to the size of the radiant chamber. Flame length is usually determined by performing a dedicated firing test, but Computational Fluid Dynamics (CFD) can be conveniently used for this purpose.

The present work describes a numerical analysis of a gas-fired burner in a vertical cylindrical fired heater. Starting from the 2D drawing, a 3D model of the burner and the radiant section of the heater was created and meshed using ANSYS ICEM CFD. The ANSYS CFX solver was used to run the simulation.

The analysis was developed in cooperation with EnginSoft, especially in the development of the 3D model and the meshing stage. Different load conditions of the burner were tested in order to check the flame height under different conditions.

Burners are used to convert the chemical energy of a fuel into thermal energy through a combustion process. The aim of these devices is to mix the fuel and air in the right proportions, initiate and maintain ignition and then ensure the stability of the flame. A burner must also be operated safely: this means that the flame must be stable and the flame pattern must not damage the equipment, for instance the refractory or heat transfer surfaces. The burner must also meet the required turndown capacity and fulfill the local requirements in terms of pollutant emissions. Burners are widely used in the Oil&Gas industry and are key components in API 560 direct fired heaters.
In direct fired heaters, the heat released by the burners is transferred to a process stream that can be used for many different purposes (e.g. to feed a reactor or a distillation column, create regeneration gas for an absorption unit, to heat oil, etc.).
A typical API 560 direct-fired heater is divided into two sections: a radiant section where the combustion process takes place and where the heat is mainly transferred by radiation, and a convection section where the flue gas cools down by convection and heats the fluid inside the tubes (Figure 1). In an API 560 design, the first three tube rows encountered in the convection section consist of plain tubes, called shock tube rows: they shield the remaining part of the convective section, typically made of finned tubes, from the direct radiation of the flame. Part of the heat in the shock tube rows is transferred by direct radiation of the flame.
During the design stage of the fired heater, a number of requirements regarding the burner selection and arrangement have to be fulfilled to ensure the safe operation of the heater. Some design practices for fired equipment dictate the maximum flame height with respect to the size of the radiant chamber. The height of the flame is usually assessed with a firing test, except in instances where the burner capacity exceeds the maximum allowable load of the test facility. In this case, CFD can conveniently be used to conduct a preliminary assessment, seeing that the only opportunity to perform a physical test would be once the burner is already installed in the field. The development of an accurate CFD model represents an economical and time-saving alternative to both firing tests and field tests

The case study is for a regeneration gas-fired heater, designed and supplied for a project in Oman. Its design is of the vertical cylindrical type, according to the API 560 standard. The heater is equipped with a single burner and forced-draft fan. The fuel is a gas constituted of a mixture of various hydrocarbons. The main components are methane, ethane and propane: these components account for the 90% of the total mixture. The radiant section is cylindrical, and the process tubes are vertical. The fluid is distributed in four parallel passes, with 12 tubes per pass (creating a total of 48 tubes in the radiant section).
The burner is located on the floor of the chamber. It’s a staged fuel burner: a portion of the fuel and all the combustion air are mixed in a primary combustion zone, while the remaining fuel is supplied through a series of nozzles around the perimeter of the burner. Before entering the combustion chamber, the air flows through a swirler to ensure proper mixing in the primary combustion region. A picture of the burner is reported in Figure 2. 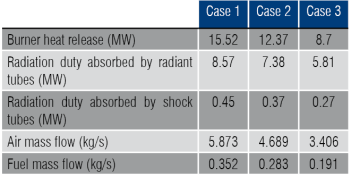 The aim of the analysis was to determine the flame length in three different operating conditions: Table 1 reports the burner heat release, the radiation duty absorbed, and the flow rates for both air and fuel for the three cases considered.
While many definitions are possible for the flame surface, for the purpose of this work, the flame was defined as the iso-surface at a temperature of 1400K.

The model was implemented by EnginSoft. Starting from the burner manufacturer’s drawings, a 3D model was created directly using ANSYS ICEM CFD, which was also used to mesh it.
Since the focus of the analysis was the flame structure, only the radiant chamber was modeled. Given the symmetries that are present, there was a possibility to analyze only a portion of the domain,. Unfortunately, the symmetries didn’t exactly match each other: there were 6 nozzle for the staged fuel, 10 for the primary fuel, 4 tube passes and 48 tubes. The only effective symmetry was a 180° portion of the domain, especially because the domain outlet was rectangular and not circular. For greater accuracy, it was better to simulate half of the radiant chamber. However, this required significant computational time. 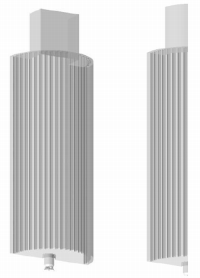 In order to understand the effects of the periodicity of the staged fuel nozzles, two models were created: one model had a periodicity of 180°, the other 60°. In the second model, the nozzle diameter of the burner was opportunely scaled obtain the correct exit velocity. The temperature of the process fluid was also adapted to reflect the correct process duty absorption from the domain. The aim was to understand the impact of the assumptions of the simplified model on the flame height. For this purpose, both two models were solved for Case 1, and the results were compared. The two models are depicted in figure 3. The case was solved with ANSYS CFX.
The following boundary conditions were set:

The chemical reactions that take place in the system were explicitly simulated in order to accurately predict the temperature field in the entire system. The following reaction mechanism was included in the model:
The SST (Shear Stress Transport) turbulence model was applied. The buoyancy effect was considered. The Monte Carlo Radiation Model was applied for the radiation heat transfer. 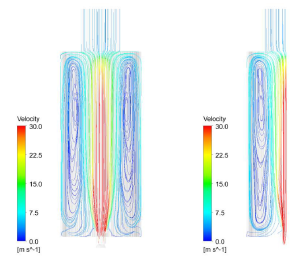 The Velocity streamlines are reported in Figure 4 for the 180° model and the 60° model. The typical flow pattern of a heater can be seen: the fuel and air enters at the bottom, the flue gas flows through the center of the chamber. Part of the cold flue gas flows downwards along the tubes at the periphery of the chamber. The streamline patterns are quite similar for the two models. 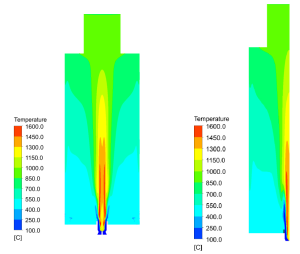 Figure 5 reports the temperature profile at the symmetry plane for the two models: the points with the highest temperature are located in the combustion region over the burner, where the chemical reaction takes place. The coldest region is located in the lower part of the chamber at a distance from the burner: the recirculating flue gas flows downward and is cooled by the process tubes. The difference in the temperature profiles between the two models is concentrated in the lowest part of the chamber.
The iso-surface at 1400K is depicted in Figure 6.

There are some differences in the shape of the surfaces, especially at the bottom. Figure 7 reports the maximum height of an isosurface for many temperatures: at 1400K, the difference between the values predicted by the two models is limited. 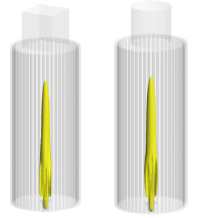 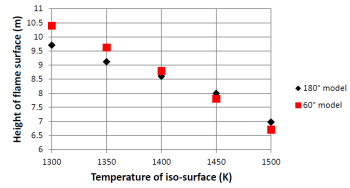 Figure 7 - Maximum height for iso-surfaces at given temperatures

Both values are lower than the maximum flame height for this specific heater (9 m).
The other cases were run using the 60° model. The streamlines for these cases are reported in Figure 8, while the iso-surfaces are depicted in Figure 9. The flame heights are 7.37 m and 4.83 m respectively for case 2 and 3.

A CFD analysis of an industrial burner was performed. Two models were created and compared: in the first one, half of the radiant chamber was simulated; in the other, one sixth.
The two models were tested with the same conditions: velocity streamlines, temperature profile and flame surface were compared. Although the smallest model didn’t fulfill all the symmetry requirements of the real burner geometry, its results accorded with those of the bigger model. Another two cases were analyzed, and the flame height was determined.

The results proved that the flame height can be determined with reasonable accuracy using the 60° model, with a consequent saving in terms of computational effort. The heater is planned to be started-up in 2018. Accurate observations of the flame will provide significant feedback to the outcomes of the CFD study. Positive feedback will provide strong support for confirming CFD analysis as a reliable alternative to physical firing tests. 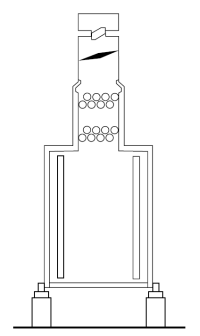 Figure 2 - Burner, (a) General arrangement, (b) swirler and burner tip 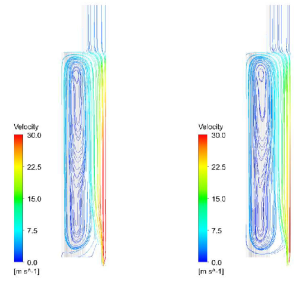 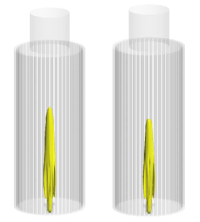 The case for computerized optimization over manual design interventions

In this article, we show that the main turbine characteristics, such as efficiency and exit flow angle, can be sufficiently improved using parametric optimization.