Packaging companies are always striving to stay one step ahead of their competitors in providing the best solutions for product capacity.
Furthermore, in most cases, significant effort is devoted to the design of flexible machines: performance is expected to be high and consistent even if the packaged goods, packaging format, or packaging material are changed.
Materials, in particular, are heading for a revolution driven by the regulatory restrictions that will take effect over the next few years.

Coesia partnered with EnginSoft and the University of Trento’s Department of Industrial Engineering to simulate a stand-up pouch packaging machine (Doypack®). The stages analyzed were opening, filling with detergent, and closing (Fig. 1). The scope was to develop a digital model to perform the two-way coupling between the flexible package structure and the fluid content.
The problem was addressed using two commercial tools: Particleworks and RecurDyn. The former represents the fluid behavior using particlebased computational fluid dynamics (CFD) while the latter efficiently calculates the deformation and dynamics of the flexible pouch by performing a Multi-Flexible-Body Dynamics simulation. We first demonstrated the feasibility of the analysis and then verified the results using the experience of Coesia’s engineers with the Doypack® machine.
Three different simulations were performed to understand the influence of the material properties, pouch thickness, machine velocity, and opening span of the pouch on the process of preparing and filling it.

Description of the stations

The machine operates cyclically, alternating between pack feeding movements and stationary operations in which each process is executed. The movement is implemented by a set of upper and lower clamps that support the pouch. Each station is equipped with two pairs of upper clamps that restrain the pouch during stationary operations. Forward movement of the pouch to consecutive stations is provided by the lower clamps, which are moved back and forth by a four-bar linkage mechanism. The stations can be widened to accommodate up to three packages per stage (triplex), increasing the capacity of the machine. The automatic process begins with the unwinding and forming of the film. The film is then trimmed and laterally sealed to obtain each individual flat package.
The focus of the simulation project was to model the subsequent stations (and the lateral movement of the pouch between them). The machine workflow includes:

As the open pouch nears the filling station (B), the nozzle moves downward, partially entering the package. A second exchange of the support clamps occurs. Once the upper clamps are engaged, the nozzle’s shutter is pneumatically moved upward, allowing fluid to flow through the nozzle into the pouch (Fig. 3). Once the pouch is full, the shutter moves downward again.
The lower clamps then move the filled package toward the closing station. Here the clamping switch is repeated. The upper clamps then pull apart, stretching the pouch and restoring the flat configuration at the top, closing the pouch (C).
The remaining machine operations are then performed. The top-sealing stage follows the closing phase. The final operation of the machine is performed at the rejection station (quality check), and the full pouches that conform are distributed through the discharge belt.

An in-depth knowledge of the processes in a high-capacity automatic machine is essential when the goal is to achieve fast, high-quality production. For this reason, several analyses were prepared to study the operations, focusing on different configurations and parameters.
Three sets of simulations were performed:

The first analysis was performed on the entire process (opening, filling, and closing) to study the influence of two parameters:

The second analysis focused on the sensitivity to variations in the physical properties of the packaging film (thickness and Young’s modulus), compared to a reference configuration.
The stability and shape of the package were studied, evaluating the influence of percentual variations to the pouch properties (-10%, -5%, +5%, +10%).
The final study was conducted focusing on the phenomenon of sloshing, which occurs when the pouch moves from the filling to the closing station. This was analyzed by considering two configurations of opening and varying the speed of the machine. The fluid level cannot exceed a predefined limit to ensure that the sealing area remains clean. Higher machine speeds tend to increase the internal sloshing and an upper limit for the velocity can be identified based on the minimum distance required from the top of the pouch.

Modeling of the problem

The multi-body and structural parts of the model were developed in RecurDyn. The rigid components (i.e. upper and lower clamps, suction cups, nozzle, and shutter) were inserted into the RecurDyn model using their CAD designs and assigning them their specific laws of motion.
The structure of the pouch was modeled using the Full Flex approach: a series of flat geometries was created (Fig.6a), meshed with 4-node 6-DOFs shell elements (Fig.6b), and merged to obtain a single Finite Element (FE) flat structure. The shell elements are well suited to representing thin films. RecurDyn’s Full Flex method also enables efficient and effective simulation of nonlinearities related to large displacements and contacts.
To accelerate and automate the calibration of the pouch model, a script was developed (using the integrated PNet environment) to easily repeat the steps of structure definition and meshing. By varying a few parameters in the code, an iterative procedure was accomplished to correctly define the properties of the FE structure.
Once each component was correctly defined, the interaction of the package with the tips of the clamps and the suction cups was configured. Particleworks is a mesh-less CFD software based on the Moving Particle Simulation (MPS) Method. The underlying Lagrangian approach is ideal for analyzing free-surface flows, such as the injection of the fluid into the pouch (jet flow and splashing phenomena). An annular surface was defined and positioned above the shutter. From this surface, fluid particles are generated with a constant flow rate. Among the physical properties of fluids, the most influential is the rheological law. Detergents and foods injected into pouches frequently exhibit non- Newtonian behavior, with viscosity that varies according to the local shear rate. In this analysis, the liquid detergent displays a shearthinning behavior (with viscosity decreasing at higher shear rates).
The experimental data was fitted and applied to the fluid settings. The particle size and numerical settings were selected by evaluating the desired sensitivity of the simulation results, while also considering the computational cost.
The co-simulation configuration is assisted by a communication strategy already implemented between the two tools, RecurDyn and Particleworks. A two-way Fluid-Structure Interaction (FSI) can therefore be used to simulate these tightly coupled physical domains.

The results of the complete analysis at different frames are depicted in Figs. 7-9. During the first process (Fig.7), the progressive unfolding and opening of the pouch can be observed. The structure is represented displaying the von-Mises stress. Fig. 8 shows a cross-sectional view of the gradual filling of the package. The velocity and pressure distribution of the particles can be seen, allowing a detailed analysis of the detergent flow into the pouch and its interaction with the lateral film and the bottom gusset. Fig. 9 illustrates the closing process.
One of the most interesting results with respect to the analyzed configurations concerns the lateral deformation of the filled pouch as it exits the filling station. The deformation is defined by the difference between the nominal and the actual mean position of the bottom gusset (Fig.10). The deformation of the pouch is more strongly influenced by a less (A1) or more (A2) open package, rather than by a less (M1) or more (M2) rigid material.

A summary of the results of the variational analysis is shown in Fig 11. The stability of the bottom gusset during the opening operation is the aspect that is most sensitive to changes in the physical properties of the film. A collapse of this part tends to refold the entire package, blocking the execution of the subsequent operations. The results show that a stiffer film increases the possibility of the gusset collapsing. The variations analyzed in the properties help define the boundaries for a successful filling process.
Fig. 12 presents the results of the sloshing analysis. The gap between the maximum fluid level and the upper bond of the pouch is shown for different machine speeds and two apertures of the pouch. The waves in the fluid, caused by the acceleration and deceleration of the package, reach a greater height (smaller gap) when a faster machine speed is selected. At the same machine speed, the more closed pouch has a higher fluid level. If limiting the maximum fluid height is the primary design requirement, then A2 allows higher machine speeds than the A1 version.

This study demonstrated the powerful capabilities of the tools that were used to address a complex two-way FSI simulation. The results are promising: they can be used to select the best combination of parameters and to predict performance as the machine configuration or package characteristics change. Both structural and fluid behavior can be analyzed in detail, providing key information that cannot be retrieved experimentally.
All simulations were performed using a standard workstation with an entry-level graphics processing unit (GPU) card. Despite this, the entire simulation was performed in 10 hours allowing it to be run overnight without the need for a high performance computing (HPC) facility. Furthermore, the use of mid-range or high-end GPU cards can easily reduce this time.

The simulation results can be used to identify an ideal combination of parameters. When the rigidity of the package must be ensured throughout the line, the less open configuration is preferable (Fig.10). The stiffness of the material has a visible, though less significant, effect than the opening configuration.
These results are useful as we move to recyclable, less rigid materials since they can be used to study the effect on the process in advance. It is possible to select certain ad hoc opening configurations to compensate for dissimilar behaviors when different package formats or materials are used.
The sloshing results led to an opposing conclusion. When the machine speed is high and must be maximized, a greater aperture of the pouch should be selected to reduce the height of the waves in the fluid in the pouch. While these results show opposing directions for improvement, by relaxing some constraints (such as selecting a constant opening configuration), insightful simulations can be performed to identify the best compromise combination for each specific operation.
The results obtained for the first operation (opening and lateral motion of the empty pouch) and the final operation (lateral movement of the full pouch) show opposing positive correlations with the span of aperture. This hint at possible improvements, such as varying the span of aperture across the stages of the machine.

This work was being presented in the Manufacturing session of the International CAE Conference and Exhibition 2021.

Coesia is a group of companies specialised in highly innovative industrial and packaging solutions, headquartered in Bologna, Italy.
Isabella Seràgnoli is the sole shareholder.
Coesia companies are leaders in the sectors of:

Fig. 2 – Initial configuration at the beginning of the opening process 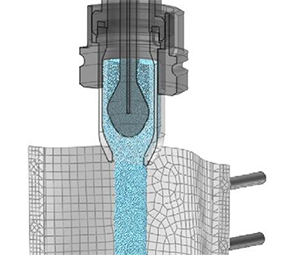 Fig. 3 – Flow of the fluid particles through the nozzle 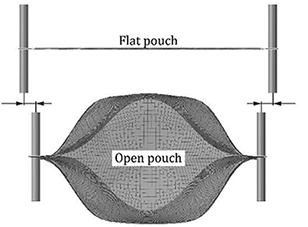 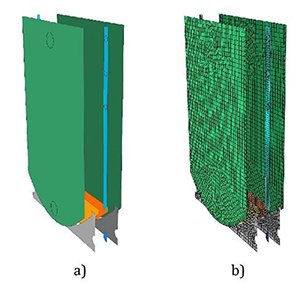 Fig. 6 – Development of the Full Flex structure of the pouch 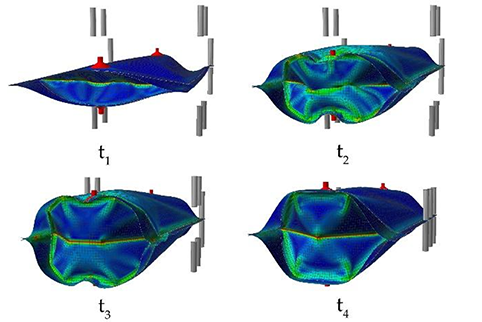 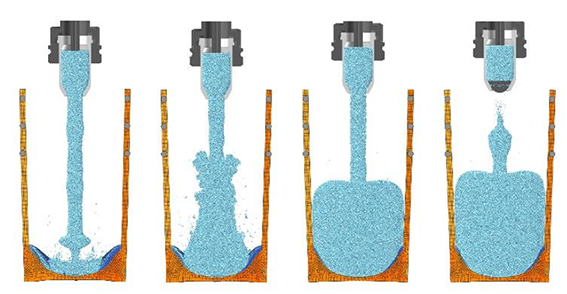 Fig. 8 – Progressive filling of the pouch with the liquid detergent

Fig. 9 – Von-Mises stress of the filled pouch before (left) and after (right) the closing process

Fig. 10 – Pouch deformation for four different combinations of the pouch aperture (A1 less open than A2) and the pouch stiffness (M1 more flexible than M2).

Fig. 11 – Results of the parametric analysis of the effects on the structure of the bottom gusset

Fig. 12 – Gap between the fluid and the top of the pouch at different machine speeds, for a less (A1) or more (A2) open pouch.

This technical article, a collaboration between EnginSoft and ZECO, compares two different methodologies for the study and optimization of impulse turbines, specifically Pelton turbines, in order to evaluate which is the quicker and more reliable method.