EnginSoft developed a 3D CFD model of a Liquefied Natural Gas (LNG) Plant for the simulation of the Air-Cooled Heat Exchanger Systems’ (ACHE) arrays and their interaction with the wind.

The aim of the analysis was to predict the effectiveness of ejecting heat generated by the ACHE systems, given the plant layout and environmental conditions.

"The CFD model EnginSoft developed is able to predict the theoretical and experimental trends reported in the reference literature. We consider this to be a powerful tool that can be used to give direction to the engineering design of an optimum LNG plant layout that can mitigate the phenomenon of hot air circulation." 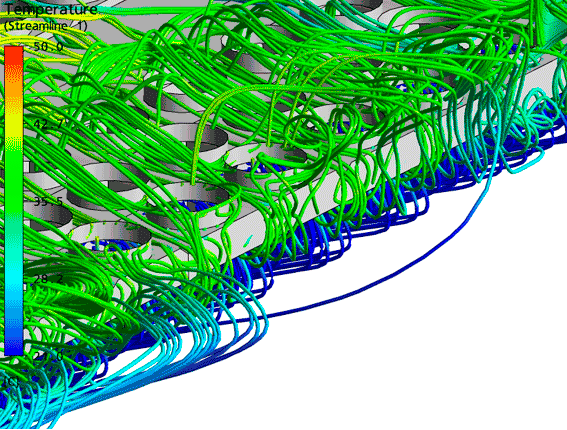 The air flow around the ACHE arrays

Close-up of the hot gas from the upstream turbines stacks, which does not interact with the ACHE arrays in the background

The Background for the CFD model

Air-Cooled Heat Exchangers (ACHE) Systems are widely used in LNG Plants to cool gas to its liquid form. This, however, results in the generation of intense heat that needs to be ejected into the atmosphere. The interaction of the environmental conditions, specifically the wind speed and direction, with the ACHE configurations and the LNG plant layout can severely lower the efficiency of the heat ejection and subsequently of the plant’s natural gas production rate. This is a well known problem that is being thoroughly investigated by both industry and the scientific community. Specifically, efforts to identify the physical mechanism underlying the phenomenon have been made, and the following possible causes of reduced performance of ACHE systems under windy conditions have been identified:

The model built made use of information about the plant design that was supplied by Saipem Spa, a major turnkey contractor in the oil and gas industry. Information provided included data related to the geometry that was to be modeled, data characterizing the prevailing wind conditions for the site, and data sheets with the volumetric flow and temperature differential for the more than 650 fans located in different trains that were built into the model. The CFD model developed by EnginSoft investigates the actual data being used to design a new LNG plant in Algeria.
Starting from the information supplied by Saipem a 3D CAD model of the plant was built. The geometry was then meshed with some 28x106 hexahedral elements. More than 650 fans are modeled as solid domains characterized by constant boundary conditions at the inlet and outlet locations. Each of the fans is represented with its own volumetric flow and temperature differential following the data sheet supplied. Given the large size of the domain, the plant was subdivided into 7 different macro regions in order to simplify the geometry, mesh pre and post-processing. For the atmospheric boundary layer, two types of site specific wind conditions were factored in: a westerly wind (winter) and a northerly wind (summer). A power law was used to model the wind profile including the Pasquill Stability class of turbulence.

The resulting model is able to reproduce the consolidated findings in the reference literature. CFD modeling proved to be a very efficient way of analyzing the plant’s geometric details and site-specific ambient conditions in order to mitigate the phenomenon of hot air recirculation. In particular the model correctly predicted the ACHE affected by self-recirculation for both the cross and the longitudinal wind directions. The model allowed Saipem to characterize the plant performance in the early stages of the project, allowing them to make engineering choices that would produce an optimal plant layout. 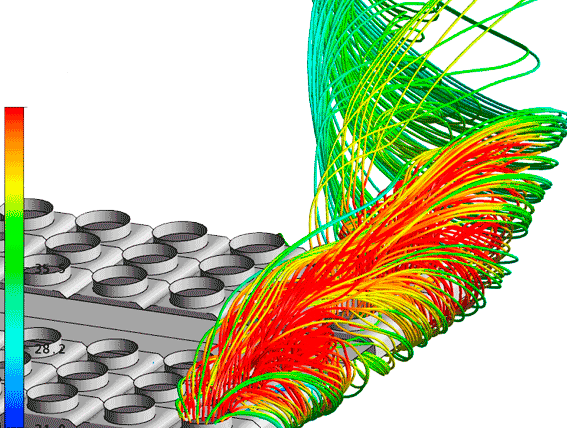 The air flow around the ACHE arrays

Close-up of the hot gas from the upstream turbines stacks, which does not interact with the ACHE arrays in the background

The connecting rod is one of the most important components in powertrain systems, so it requires very careful structural analyses because its failure implies serious damage to the entire engine.