Increasing environmental awareness has led to changes in motorsport regulations that limit the quantity of traditional and computationally intensive optimizations that can be used and encourages the use of numerical methods to improve the vehicles. This article describes a new method of aerodynamic design, the result of a collaboration between Dallara Automobili and RBF Morph, that uses adjoint methods and mesh morphing to create an innovative solution to accelerate the optimization process, reducing both time and costs.

The technological evolution we are witnessing today is redefining the boundaries of what it is possible to achieve with numerical simulations. As engineers, this constant drive mainly affects the ways we approach product testing and design in two ways: by the increase in computing power, and by the use of new and refined numerical methods. In recent years, computational fluid dynamics (CFD) has particularly taken advantage of the former, allowing complex and refined simulations – that would have required days in the past – to be completed in a matter of hours.
The increasing sensitivity towards environmental sustainability and awareness of ecological problems today, however, is leading to a new scenario in which a new balance must be found between computing resources and environmental awareness. In motorsport, this shift has been made evident by the computing restrictions introduced by the FIA rules, which place de facto limits on the ability of teams to use traditional and computationally intensive approaches to optimization, and encourage the adoption of more subtle and technologically advanced numerical methods over the use of brute force.
In this article, resulting from the cooperation between Dallara Automobili and RBF Morph, we present a new approach to aerodynamic design in which the synergy between adjoint methods and mesh morphing is exploited in order to deliver a turnkey solution to accelerate the optimization process, reducing both time and costs.

According to the proposed method, the information extracted from adjoint simulations is ingeniously employed to update the numerical grid using RBF Morph and deliver a new optimization paradigm in which the engineer can inspect – at a post processing stage, too – the influence of any given shape parameter in real time, without the need for a new CFD simulation. To demonstrate this approach, we will show how a clever new tool, called rbf-adjoint-interactive, was applied to a Dallara Formula 3 car in order to reduce its aerodynamic drag by 0.43 drag points.

Dallara is an Italian race car manufacturer founded in 1972 in Varano de’ Melegari (Parma). The successes in Formula 3, first in Italy then all over the world, their affirmation in the American IndyCar, consultancies for important manufacturers, and constant attention to technology and innovation have all led to Dallara being recognized as one of the most important firms specialized in designing, developing and producing the fastest and safest race cars in the world. An overview of how active Dallara is in race cars and top cars is provided in Fig. 1 which summarizes its activity in motorsport (a), consultancy services in motorsport and top cars (b), and the recently launched Dallara Stradale (c) the first top car entirely conceived, produced and branded Dallara, in which “Engineer Dallara’s dream has become a reality”.
The excellence pursued and achieved by Dallara is the result of the core competencies (Fig. 2) the company has refined in 40+ years of experience. A good concept becomes a great prototype thanks to the adoption of best-in-class composite materials to create lightweight, durable structures; great attention to aerodynamics ensures minimum drag and the desired downforce; and advanced vehicle dynamics achieves top performance on the road and on the track. Dallara’s facilities include a wind tunnel for 1:2 scale vehicle testing and a professional driving simulator.
Aero development plays a key role in conceiving and optimizing a race car. The process (Fig. 3) combines numerical simulations and wind tunnel testing. A detail of the CFD process is provided in Fig. 4 where the role of volume mesh morphing combined with a primal and adjoint flow solution is highlighted. In the study presented here, a detailed example is given that shows how advanced mesh morphing provided by RBF Morph is combined within the aero development of a Formula 3 car.

RBF Morph is a pioneer in providing reliable and high-performance mesh-morphing-based technology for CAE multi-physics modelling and optimization, with more than 10 years of experience in industrial applications of Radial Basis Functions (RBF). At the core of its business there is a line of best-in-class products crafted to deal with challenging CFD and CSM applications. RBFs are recognized as one of the best mathematical tools for mesh morphing, able to continuously interpolate or extrapolate values defined at discrete points. RBF makes it possible to define mesh morphing problems from a list of points and their displacements in space, since it can propagate volume deformations that have been carefully and precisely prescribed at the boundaries. RBF-based mesh morphing has a number of advantages over traditional methods. It is generally faster than remeshing and allows the shape of a numerical mesh to be parameterized while preserving its original topology. An example of how RBF Morph can control the shape using RBF points is provided in Fig. 5.
The remeshing noise, introduced by a new computational grid, is avoided and the shape of a validated CAE model can be updated without rebuilding a new mesh. New shapes can be investigated even if the underlying CAD geometry is missing, and the mesh can be updated to measured shapes (i.e. to take manufacturing tolerances into account).
Thanks to the mesh-independent property typical of RBF methods, the same mesh deformation problem can be applied to different grids without added overhead and, since the numerical geometry can be deformed directly at the solving stage, it is possible to obtain an impressive acceleration in optimization (usually reduced by a factor of five) compared to traditional approaches, since calculations on new design variations can be restarted using converged solutions obtained at the previous configuration. In this study, the RBF Morph Fluent add-on was used, leveraging its integration with the Fluent Graphical User Interface and its ability to be controlled and steered with TUI commands. Several shape variations can be configured independently and saved using the graphical interface, and later mixed together – each shape with its own amplification factor – in order to obtain complex geometries resulting from their linear superimposition.

Beyond optimization: advanced adjoint based postprocessing

The power of adjoint formulation lies in its ability to obtain, for each objective function ϕ, its variation with respect to any given parameter at the cost of a single added evaluation. This approach is particularly powerful when dealing with freeform optimizations, in which each nodal displacement xk is a parameter and traditional optimization is not feasible (10k surface nodes would translate into 30k parameters).
On the other hand, RBF Morph provides the deformation velocity, namely the displacement of each node function of the shape amplification factor b, for each shape variation. By coupling an Adjoint solution in the form of a shape sensitivity map (δϕ/δxk) with the shape parameters generated using RBF Morph (δxk/δb), it is possible to efficiently compute the influence of a given shape parameter on the objective function (δϕ/δb) at the cost of a single multiplication.
This calculation can be carried for any given shape parameter and automatically used in a gradient-based optimization, for example together with a gradient descent algorithm.
In this article, which uses the high-fidelity CAE solver Ansys Fluent (CFD + adjoint), we present a variation of this approach using rbf-adjoint-interactive, a brand new interactive custom feature defined to quickly explore new shapes without any additional solver calculations.
This approach involves four steps:

Drag analysis of a Formula 3 car

Dallara used the rbf-adjoint-interactive functionality to optimize the performance of an F3 car. In particular, the drag was evaluated by adopting a half-car model mosaic mesh comprised of about 50 million cells.
The drag sensitivity was calculated with the adjoint solver (Fig. 6) and three specific regions of interest were identified: the rearview mirror, the bargeboard, and the front wing end plate. The mesh morphing configuration explained in Fig. 5 was applied to the three regions of interest and 14 shape parameters were generated to control the rearview mirror (four parameters), the bargeboard (six parameters) and the front wing end plate (four parameters).
An example of how mesh morphing affects the shape is given in Fig. 7 where the effect of one of the four shape modifications is demonstrated: the size of the nose of the mirror is a geometrical parameter controlled by mesh morphing. As explained in the introduction, in this specific study parameterization was not used at it usually would have been for a complete optimization which foresees as certain number of loops. The scenario discussed here was inspired by the limitations to the number of allowable shape variations that can be explored as imposed by the FIA rules for Formula 1. The rbf-adjoint-interactive tool is, in fact, intended to best understand what can be achieved in a single shot after inspecting the adjoint sensitivities.
By inspecting the quantitative estimation of the individual effect of each shape parameter, the engineer can decide how to combine them to define a new, hopefully improved, shape. It is important to note that the sensitivities are only valid around the baseline. This means that too much variation could be risky, while a small variation is safer… but represents a small gain.
We challenged ourselves on a Friday afternoon in order to run a new simulation over the weekend. We defined the new shape by combining eight parameters (four on the mirror, and four on the front wing end plate) that showed the most promising results. A 0.6% reduction of the drag force was obtained, corresponding to a reduction of 0.43 drag points. A comparison between the original shape and the optimized one is provided in Fig. 8. It is worth noticing how small shape variations, applied to the most sensitive regions as identified by inspecting the adjoint results in Fig. 6, produce an important variation in the drag force of the car.

Advanced tools are necessary to obtain as much information as possible from high-fidelity CFD. When shape sensitivities are available (adjoint solution), we can calculate the derivatives in performance with respect to parameters.
In this study, we presented rbf-adjoint-interactive, a new tool based on Ansys Fluent and RBF Morph that predicts the effect of shape on performance without the need for a new CFD computation. The proposed method was applied to reduce the aerodynamic drag of a Dallara Formula 3 Car by modifying the mirror and the front wing end plate to gain 0.43 drag points.

Fig. 1 – Dallara is active in the production of race cars (a), consulting services for top performance vehicles (b), and recently introduced the Dallara Stradale (c) onto the market.

Fig. 2 – Core competencies at Dallara: from a new concept to the production of a race car built with best-in-class materials and delivering top performance, achieved by conducting accurate optimization of aerodynamics and vehicle dynamics. 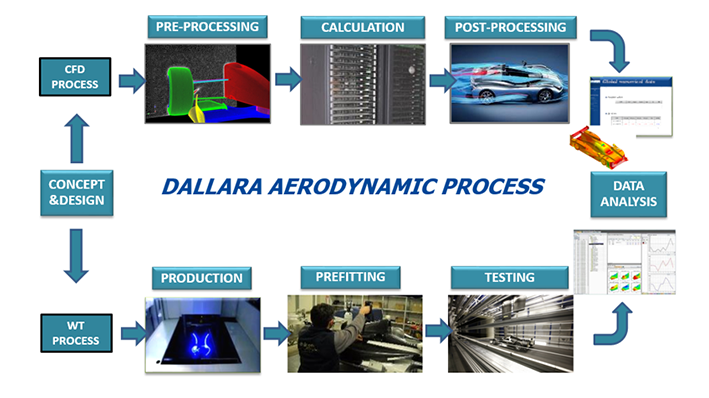 Fig. 3 – The aerodynamic process at Dallara: wind tunnel and CFD are combined to design and optimize aero shapes. 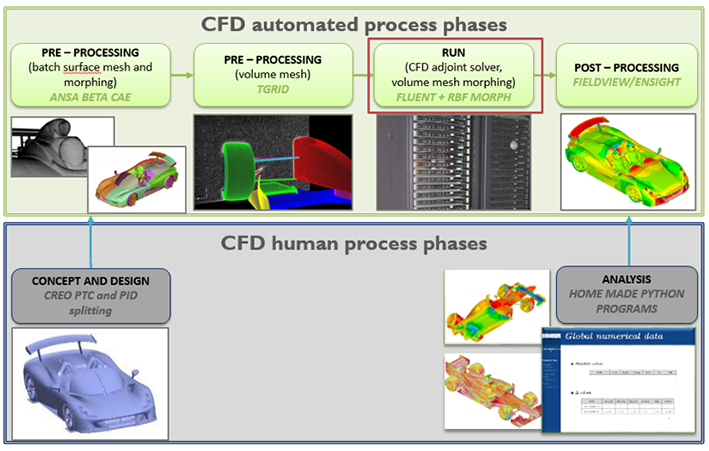 Fig. 4 – The CFD process in detail. High quality surface mesh and volume mesh are prepared for the CFD solver from CAD models. Volume mesh morphing happens in combination with a CFD solution of primal and adjoint flow. 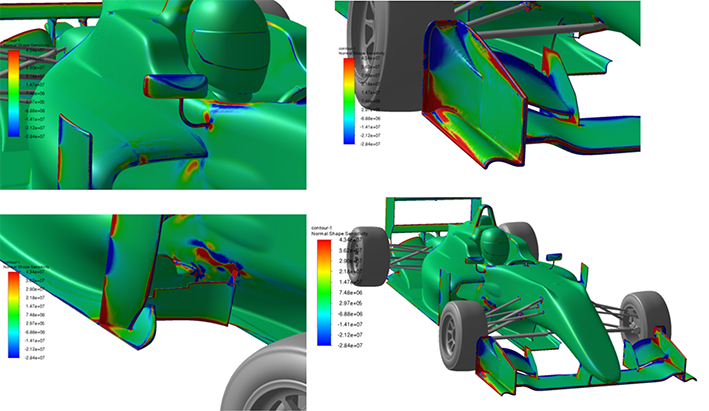 Fig. 6 – Sensitivity map of the car; details of the rearview mirror, the bargeboard, and the front wing end plate.

Fig. 7 – Example of mesh morphing, the width of the mirror nose is reduced. 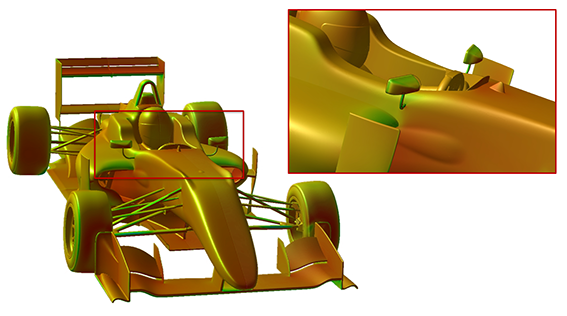 Tools and methodologies for generating digital twins in medical research

This article provides a non-exhaustive overview of some of the latest advances in the adoption of CAE technologies in the medical field by citing some ongoing EU research programs.