This paper demonstrates how the biological growth method, studied by Mattheck in the 1990s, can be easily implemented for structural shape optimization finite element method (FEM) analyses using advanced radial basis functions (RBF) mesh morphing. We use the same mechanism observed in tree trunks: hot spots of higher stresses promote material growth as well as reducing the stress itself thanks to the added thickness. Mesh morphing is a key enabler in adapting the desired shape, calculated over the surface of the finite element analysis (FEA) mesh, to the entire solid domain. According to the same principle, material can be also removed allowing for lighter structures. We first explain the method by studying a tree trunk and then through a variety of successfully addressed structural optimization challenges.

Industrial design seeks to shape parts optimally to minimize both costs and risk of failure. Nowadays, designers can benefit from the introduction and widespread adoption of numerical simulation, which allows them to virtually test different configurations using FEM. Finding an optimal shape, however, requires the designer to build a numerical model for each variation to be tested, and this can become a very time-consuming task especially when complex-shaped components are being analyzed.
Mesh morphing allows a shape variation to be analyzed while maintaining the same model: only the nodal positions of the FEA mesh are updated enabling the new design to be represented and evaluated using a high level of automation and mesh node control. Such node control is paramount for the implementation of parameterless methods, such as the one presented in this paper, in which the shape evolves driven by the numerical results.

The biological growth method (BGM) is a bio-inspired approach based on the behavior observed in biological tissue under stress: areas of higher stress usually promote a high growth rate so that stress peaks can be mitigated. This method can be successfully used to optimize the shape of mechanical components and can be flexibly controlled according to the current manufacturing process.
The full complexity of the resulting organic shapes can be achieved using additive manufacturing, unleashing the full expressiveness of this method and obtaining maximum benefit; in the case of traditional machining, manufacturing constraints can be added to the shape optimization process so that feasible solutions can still be realized.

BGM is a shape optimization method whose driving force is the magnitude of surface stresses on structural components. This method is based on the observation that biological structures, such as tree trunks and animal bones, actually add layers of biological material to the surface areas affected by activation stress. In the 1990s, Mattheck proposed extending this concept to CAE and structural part design by adding material to surfaces with high stresses and/or removing it from surfaces where stresses were low.
A volumetric growth ε based on the actual von Mises stress σvon Mises and a reference activation stress σref was proposed:

The optimization behavior (add/remove material) is controlled by setting the reference stress value σref. The method proposed in this study is based on a more versatile and evolved version of the Mattheck model and prescribes displacing the node in the direction normal to the surface:

where σnode is the stress evaluated at each node, σth is a threshold value for the stress defined by the analyst, and σmax and σmin respectively are the maximum and minimum stress values in the current set. d is the maximum offset between the nodes on which the maximum and the minimum stresses are evaluated; this parameter is defined by the user to control the displacement of the nodes whilst limiting the possible distortion of the mesh. Nodes on the surface to be optimized can either be moved inward, if the stress on node is less than the threshold value, or outward, if the evaluated stress is greater. The proposed BGM implementation can be guided by a variety of stress/strain definitions (such as maximum principal stress, maximum plastic strain, accumulated equivalent plastic strain, etc.), so that the method can be tailored to the specific design requirements. Propagation to the full computational mesh of the BGM field calculated on the surfaces can be achieved using radial basis functions (RBF) mesh morphing. RBFs were introduced in the early 1960s to interpolate scattered multidimensional data and to allow interpolation of a scalar field anywhere in the defined space from known values at discrete points called source points. Since the data to be interpolated at x comprises scattered scalar values at N source points Xsi, the interpolating function s(x) can be obtained as

by summing the interactions at the probe location x with all the source points that have been computed by weighting all the radial interactions (calculated as Euclidean distances between each source point) with γi coefficients, and the probe location transformed by the radial function φ(r). The N unknown γi are calculated by imposing the passage of the s(x) function through all the (known) source points.
In mesh morphing, the source points are the surface mesh nodes over which the displacement is controlled, whilst the entire set of nodes within the mesh is updated by receiving the interpolated deformation field. Individual RBFs interpolate the three components of the displacement. The above mesh morphing technique and BGM can be successfully coupled in an optimization approach consisting of the following steps:

In the methodology described above, the stress analyst must set two BGM parameters: the threshold stress σth and the maximum displacement d. The first parameter represents the stress level value on which the optimization procedure will try to converge; the second parameter represents the maximum displacement allowed within a single iteration of optimization: the lower its value, the greater the number of iterations that will be required to reach the optimum, and the lower the risk of mesh distortions that could invalidate the FEM model will be.

The proposed approach has been implemented using the RBF Morph line of software. The RBF Morph ACT extension for Ansys Mechanical provides Ansys FEA users with a comprehensive advanced mesh morphing toolkit, and the BGM-based parameter-less shape optimization workflow is among these. This specific feature has undergone intense development driven by successful applications obtained from academic and industrial users. As shown in Fig. 2, the user is asked to specify the areas to be reshaped according to the BGM method and the maximum desired action within each iteration. Overall optimization is then achieved by simply defining the required number of intermediate iterations as individual design points in Workbench. The complete table will then be populated automatically with time depending on the cost of a single FEA run. For complex industrial applications, such as the nonlinear thermomechanical fatigue (TMF) case in the example in the image, full optimization may take several hours. Typically, a dozen FEA solutions are required to obtain a good refined optimal shape. 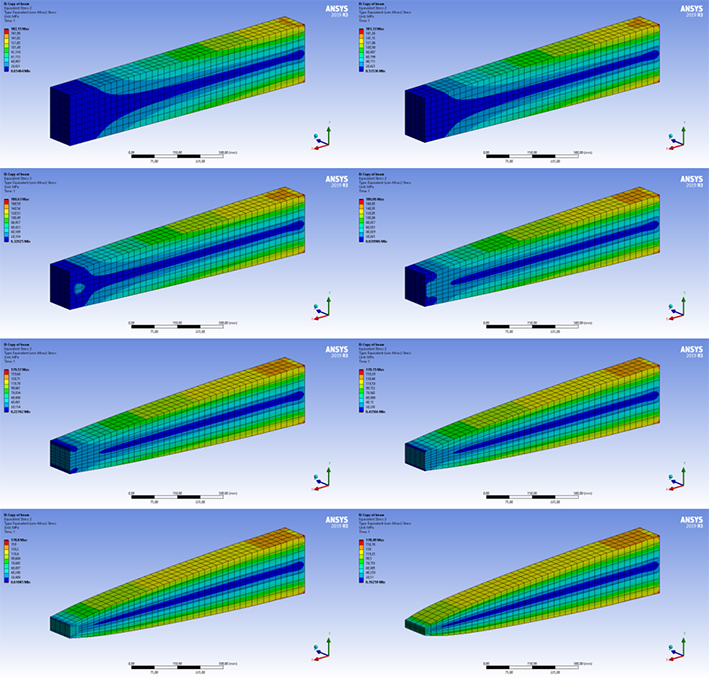 Fig. 3 - Evolution of the shape of a cantilever beam: the final shape has a parabolic profile and the stress levels on the variety of purposes that demonstrate how BGM external surface are uniform. 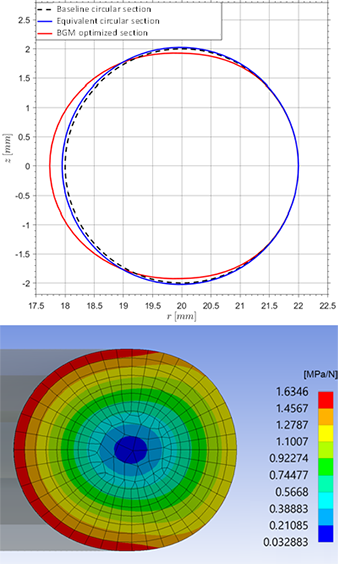 Fig. 4 - Optimized cross-sectional shape of a coil spring. The stress levels on the inner surface are uniform and the optimized shape leads to higher spring efficiency and lower maximum stress.

The proposed approach has been used for a variety of purposes that demonstrate how BGM can be useful – not only for minimizing von Mises stress, but also for obtaining lighter parts and mitigating more complex results, as in the case of accumulated non-linear equivalent plastic strain (NLEPEQ), so that component life optimization can be effectively achieved. Firstly, the algorithm’s reliability is evaluated for simple benchmarks that are thoroughly explored in solid mechanics textbooks: a cantilever beam (Fig. 3) and a coil spring (Fig. 4). It is worth noting that a bioinspired automatic method can adequately address even quite simple engineering problems with straightforward but not obvious solutions. 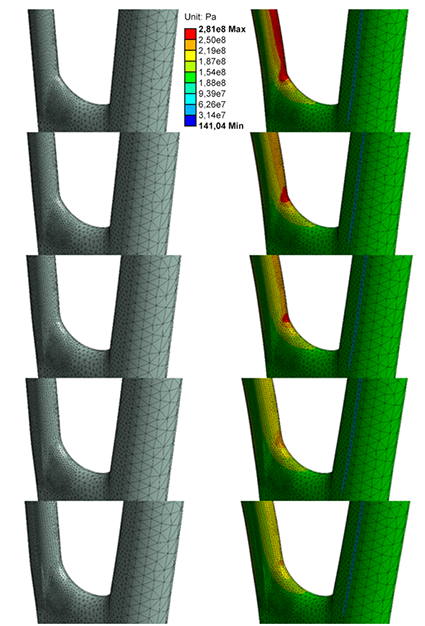 Fig. 5 - Tree trunk evolution study: based on Mattheck’s work in the 1990s, it was possible to reproduce the same shape evolution in a 3D model, highlighting the reduction of the hot-spot stress level

Fig. 5 shows the study of the evolution of a tree trunk explored by Mattheck in 1990. After 30 years, the simple 2D model originally proposed was replaced by a detailed 3D model that takes into account the wood’s orthotropic behavior. The predicted shape corresponds very well with previous FEA calculations and with the experimentally observed evolution of the real tree.

Fig. 6 shows an industrial automotive application to optimize an aftermarket motorcycle part (the Motocorse San Marino’s wheel hub for the Ducati Panigale V4); in this case, manufacturing constraints were imposed to maintain the full shape of the bracket and of the central cylindrical part of the hub.
Fig. 7 shows a TMF case that demonstrates the workflow in use at SVS FEM for a variety of automotive applications, including thermal fatigue of high-performance turbocharger housings, on a valve model. 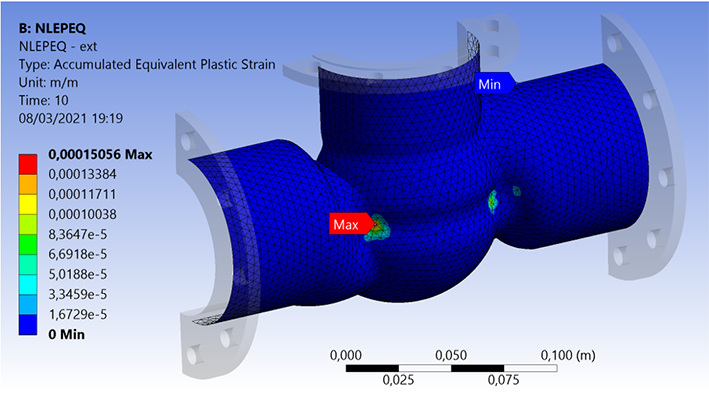 Fig. 7 - Final configuration of the valve subject to thermomechanical fatigue, which resulted in a 49% reduction in NLEPEQ.

This paper presents a new approach to parameter-less optimization, starting with the observation of the method used by nature to reduce surface stress at hotspots. This approach employs two mathematical tools: BGM and RBF-based mesh morphing. When combined, they provide an effective and reliable surface sculpting tool that can simultaneously optimize both stress levels and material utilization.

This parameter-free method requires less effort from the user, since there is no need to define shape modification parameters: optimization is driven by the actual model’s FEM results, evolving the shape towards the optimal one. In summary, structural analysts are offered a bio-inspired “natural remedy” for hot-spot mitigation. 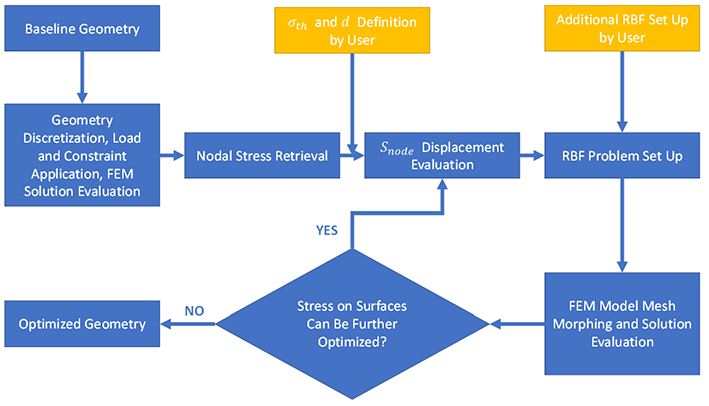 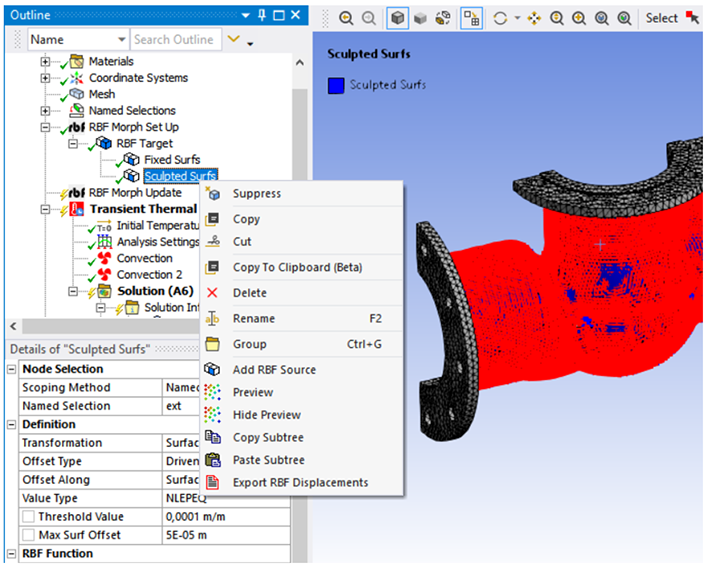 Fig. 2 - The RBF Morph ACT extension for Ansys Mechanical allows you to define the desired mesh morphing configuration directly in the tree. In this example, the wall of a valve subject to TMF is controlled by BGM using accumulated non-linear equivalent plastic strain (NLEPEQ) as the driving function.. 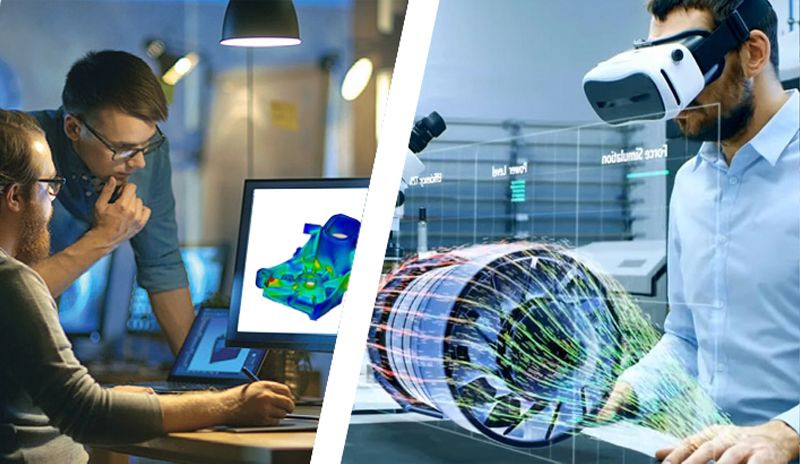 Taking stock: the evolution of simulation around the world pre- and post-Covid-19

From its earliest days through to future post-pandemic perspectives

At this particular moment in time, this article wishes to reflect on the evolution of CAE and simulation in an effort to present a big-picture view when most of us are daily dealing with all the devil in the details in every aspect of our lives. We approached some long-standing business friends in engineering simulation from various regions around the world to help us in this task