The residual strength, in particular the compression strength after damage due to low velocity impact, is one of the most critical issue for composite laminates. Indeed, composite structures submitted to low energy impacts reveal a brittle behavior and can undergo significant damage in terms of matrix cracks, fiber breakages and delaminations. Such damage is particularly dangerous because it may be undetectable by visual inspection and can drastically reduce the pristine mechanical characteristics of the structure. Generally the behavior of composite materials with respect to this issue is experimentally evaluated by the standard CAI (Compression After Impact) test. For this reason, in order to simulate the impact event, an LS-DYNA FE model of this test was developed and coupled with modeFRONTIER. The integrated procedure allowed to obtain a better understanding of the influence of some numerical parameters on the simulation results (sensitivity analysis), moreover the configuration which provided the best agreement with the experimental data (optimization analysis) was computed.

Experimental impact tests were carried out according to the ASTM D7136 regulations to assess the capability of the procedure for investigating the impact event. A rectangular plate (150 mm x 100 mm) was impacted at an energy level of 50 J by a hemispherical steel impactor with a diameter of 20.0 mm and a mass of 8.64 kg. The material of the plate was a laminate composite with a symmetric lay-up of 28 plies [45/-45/45/-45/0/0/90/0/0/45/-45/0/90/0]s. The plies were stacked and cured in an autoclave and the resulting average cured plate thickness was 5.012mm. The specimen was held on a rigid fixture with a cut-out by means of four rubber clamps.
The impact support fixture is shown in Fig.1. The contact force, the impactor velocity and displacement were recorded during the tests. Ultrasonic c-scans were performed after each test to measure the damaged area.

As the plates’ length and width dimensions were large compared to their thickness, a 2D modelling approach was chosen. In particular, layered shell elements with an element length of 3mm were used.
LS-DYNA’s linear-elastic composite shell material model (MAT54) was adopted, based on the failure criteria by Chang FK and Chang KY.
The separation of adjacent plies due to normal or shear loads, referred to as delamination, absorbs impact energy and decreases the laminate stiffness and therefore needs to be covered by the model as well. Because delamination cannot be represented inside the continuum shell elements, the laminate was divided into a certain number of overlayed sub-laminates connected by tiebreak contacts which were allowed to separate during the simulation according to a specified failure law. The influence of varying the number of layers of shell elements with these interleaved tie-break delamination contacts was investigated, using models with 2, 3, 7, 17, and 28 layers. A model with just 1 layer of shell elements without delamination was also investigated.
The most realistic description of the phenomenon was provided by a model with 17 layers: in this model, adjacent plies with a difference in orientation lower than 90° were grouped into a unique layer of shell elements. This was chosen for further investigations.
The impactor was modelled as a spherical rigid body with conventional shell elements and the material model MAT_RIGID. An initial velocity of 3.36 m/s was imposed on the impactor using the PART_INERTIA card. A very fine mesh was adopted in order to correctly compute the contact force between the impactor and the plate. The FE mesh used in the model is shown in Figure 2. Finally, an automatic surface-to-surface contact with the option SOFT=0 was defined between the composite plate and the rigid impactor. 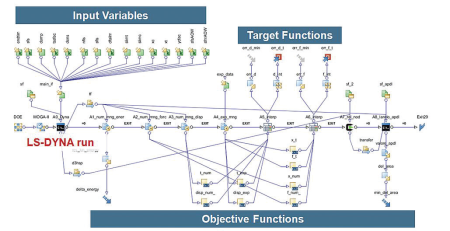 In order to better understand the influence of such parameters on the simulation results, a sensitivity analysis was performed by coupling the LS-DYNA FE model with modeFRONTIER, a process integration and design optimization tool. modeFRONTIER is able to explore the design space (i.e. the permitted values of free parameters) and find configurations which satisfy several objective functions. The integration of the LS-DYNA FE model described above into the modeFRONTIER environment is roughly described by the workflow in Figure 3. The blocks on the top define the input variables for which a suitable range of variations was set. These input variables included: the damping constant (variable sf in the DAMPING_PART_MASS card), the shear strength for tiebreak contact (variable sfls in the tiebreak CONTACT card), the degradation factor for tensile failures (variable slimt in the MAT54 card) and the degradation factor for compression failure (variable slimc in the MAT54 card). Each time a new combination of their values was proposed by modeFRONTIER, the LS-DYNA input file was updated and a new LS-DYNA analysis performed in batch mode. The output of each simulation was then post-processed and the results of the analysis evaluated. The outputs used in this study were the contact force time history, the plate deflection time history, the absorbed energy and the damaged area size. Three of these output were evaluated directly in LS-DYNA (contact force, plate deflection, absorbed energy), while the damaged area was evaluated using ANSYS FE by means of an APDL macro. These numerical results were compared to experimental data during the post-processing phase and the relative errors were computed. Such errors, which will be indicated respectively as “err_f_min”, “err_d_min”, “delta_energy” and “min_del_area” were thus the objective functions to be minimized. In the block labelled “DOE” (which stands for “Design of Experiments”) the user can generate an initial population of designs, each possessing a different combination of input variables. Starting with the results obtained from these initial designs, the “Scheduler” block iteratively generates completely new designs with the aim of achieving the defined goals using various optimization algorithms.

In order to study the interaction between the input variables and the four chosen objectives a statistical analysis was performed by evaluating an initial population of 81 designs generated by using the Full-Factorial method with 3 levels for each variables. The scatter matrix chart, which is a very useful tool to analyze the data of a statistical analysis, is shown in Figure 4a).

It was found that the variable slimt is the more significant input variable (high correlation with the 4 objectives). All parameters were found to affect significantly the damaged area objective. All objectives are positively correlated, indicating that the objectives were not conflicting.
A multi-objective optimization analysis with the algorithm MOGA-II was then performed. The optimization strategy evaluated 137 designs (the initial 49 Full Factorial designs followed by 88 designs specified by the MOGA-II algorithm), leading to several candidate optimal solutions. These can be easily detected in the 4D bubble chart of Figure 4b, where each solution is represented by a coloured bubble of a particular size. A good configuration which minimizes all four objectives should therefore be blue, have a small diameter and lie towards the bottom left of the chart. Design 189 (indicated by the red arrow) was considered to be a good compromise in achieving these goals.
The correlation between the numerical results obtained with this configuration and the experimental data, in terms of damaged area size, contact force, deflection, absorbed energy time histories and force versus displacement trend, are shown in Figures 5, 6a, 6b, 6c and 6d, respectively. The comparison shows that the fitted simulation results and experimental data to be well-correlated.

Fig. 5 - Correlation between the numerical and experimental results in terms
of damaged area size

An LS-DYNA – modeFRONTIER coupled procedure was proposed to simulate low velocity impact on composite plate. The procedure allowed the study of the influence of some numerical parameters on the simulation results and identified a configuration which provided the best correlation between the numerical results and the experimental ones in terms of contact force, deflection, absorbed energy time history and damaged area envelope.
The procedure took advantage of modeFRONTIER’s automation capabilities, allowing the calculations to run automatically and unattended for 24 hours each day until completed. Once validated on an experimental database, the procedure will permit the study of a range of factors (material properties, boundary conditions, stacking sequence etc.) on the impact resistance of a component. Hence, damage resistant structures can be designed by reducing the number of expensive experimental tests. 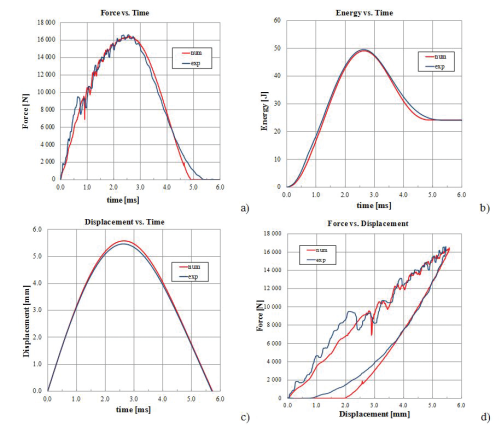 CIRA was created in 1984 to manage PRORA, the Italian Aerospace Research Program, and uphold Italy’s leadership in Aeronautics and Space. CIRA is a company with public and private sector shareholders. The participation of research bodies, local government and aeronautics and space industries sharing a common goal has led to the creation of unique test facilities, unmatched anywhere in the world, and of air and space flying labs. The CIRA is located in a 180-hectar area in the immediate vicinity of Capua, in the province of Caserta, north of Naples. Its has a staff of 320 people, most of which are engaged in research activity within domestic and international programs. 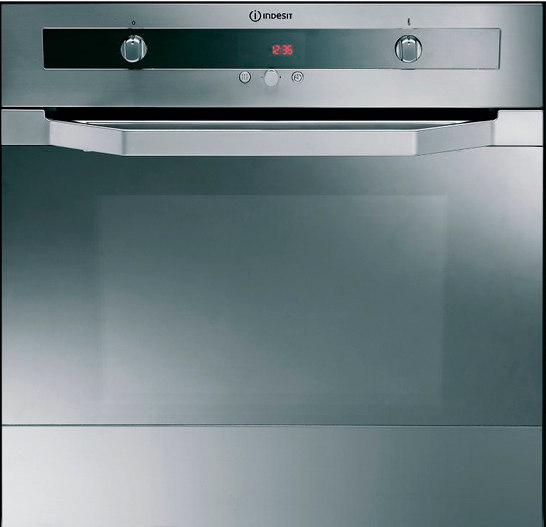 Optimizing the Glass Clamping of a Pyrolytic Oven

An appreciable 30 to 40% decrease in stresses

The aim of this study was to find the best quality glass-clamping system, through parametric model optimization, for a new pyrolytic self-cleaning oven by Indesit.